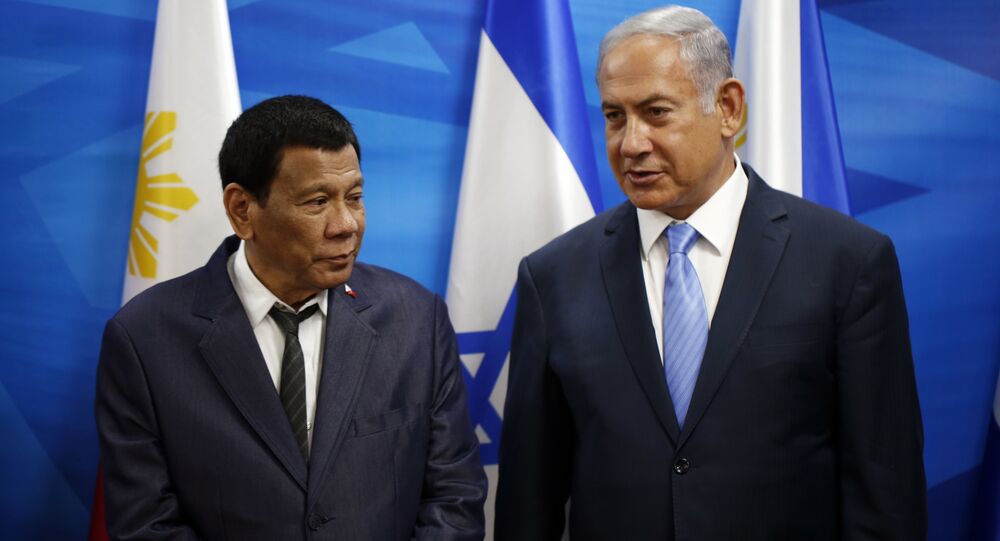 The Asian island nation's eccentric president, who made headlines in 2016 by comparing himself to the Nazi leader and saying he would "be happy" to kill 3 million drug users just as Adolf Hitler killed millions of Jews, has apologized to Israelis for the insensitive remarks.

"I could not imagine a country obeying an insane leader, and I could not ever fathom the spectacle of a human being going into a killing spree, murdering old men, women and children. I hope this will not happen again," President Rodrigo Duterte said in a solemn ceremony during his visit to Yad Vashem, Israel's national holocaust memorial, on Monday, according to the public broadcaster Kan.

"There is always a lesson to learn: that despots and leaders who show insanity, they should be disposed of at the first instance," he added.

© AP Photo / Aaron Favila
'We Have to Take a Nausea Pill': Israeli Politicians Slam 'Problematic' Duterte
The president vowed that Filipinos will do everything in their power to ensure that crimes akin to those of the Nazis are never repeated.

Duterte, who is well known for his coarse, off-the-cuff remarks, got into trouble for comparing himself to Hitler in dealing with the Philippines' drug problem in September 2016, saying he would "be happy to slaughter" drug addicts just as Hitler "massacred" Jews. The president apologized for the comments days later, saying he had no "intention…to derogate the memory of the six million Jews murdered by Germans."

During a speech to Filipino workers in Jerusalem on Sunday, Duterte also apologized for calling former US President Barack Obama a "son of a wh*re" two years ago, adding that he considers current US President Donald Trump a "good friend." Duterte cursed out Obama in 2016 over the latter's criticism of Manila's harsh war on drugs.

Duterte, the first president of the Philippines to ever visit Israel, signed a series of agreements on trade, science and care-giving with Israeli counterpart Prime Minister Benjamin Netanyahu. Other areas of negotiations are expected to include arms and oil. Duterte's visit to Israel, which began Sunday, is expected to wrap up Wednesday.