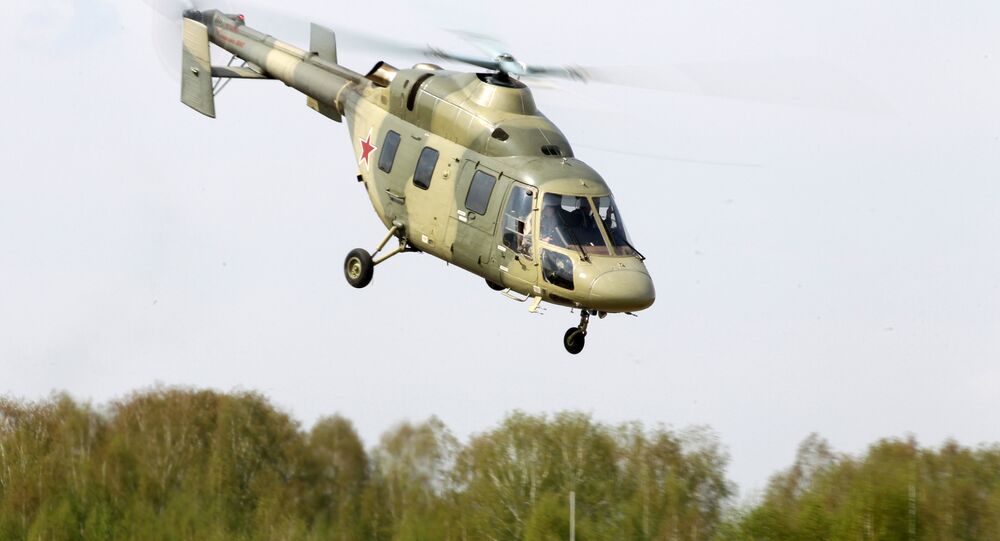 Russia's Chances, Rivals in Tender on Supply of 111 Light Helicopters to India

The Hindustan Times reported in late July that the Indian Defense Ministry had agreed on the implementation guidelines for the acquisition of the twin-engine NUHs with a maximum take-off weight of five tonnes, which are meant to replace outdated French-made Chetak choppers.

In particular, 16 helicopters would be bought in flyaway condition from the tender winner, while the remaining 95 aircraft would be made in India in cooperation with a local company. The bid is part of the Indian Ministry of Defense’s new strategic partnership policy.

READ MORE: From Russia's S-400 to US-Norway's NASAMS-II: How India is Boosting Its Defense

The NUHs, submitted for the tender, should be equipped with folding blades, wheeled landing gear and fit to be deployed in the warship hangars. The primary contenders are expected to include companies from the European Union, Russia, and the United States.

The FSMTC confirmed to Sputnik Russia's participation in the bid.

"We have something to offer in this segment. We believe that our helicopters have a range of competitive advantages and we hope to win the tender," the FSMTC said.

© Photo : Russian Helicopters
Russia May Sell 48 Mi-17 Helicopters to India (PHOTOS)
Of all Russian helicopters, light multi-purpose models Ка-226 and Ansat meet the requirements of the Indian side on the aircraft weight and size. Since Ansat has no certified naval modification, it's unlikely to participate in the competition, making Ka-226 Russia's most likely competitor. At the same time, Russian experts believe that India may reconsider its demands and ask for a heavier aircraft. In that case, Russia will be able to bid Ka-28 or Ka-32 models.

“As far as I understand, Russian Helicopters [manufacturer] is planning to offer the naval modification of the Ka-226T helicopter. It meets the Indian requirements quite well, but the fact that it is produced in small series and has few ship-borne aircraft in operation will be against this version. There is an opinion that India might need a heavier aircraft, including an anti-submarine modification. In this case, Ka-28 or Ka-32 can be used,” senior expert for Russia’s Center for Analysis of Strategies and Technologies (CAST) Mikhail Barabanov told Sputnik.

According to Arms Export magazine editor-in-chief Andrei Frolov, the naval version of the Ka-226T helicopter would be Russia's best bid, as this aircraft meets India's requirements the most.

“The existence of the joint venture on Ka-226T production on the Indian territory speaks in favor of this aircraft. I think the Indian side would benefit from producing the ship-borne version of this helicopter, taking into account Delhi's commitment to local production and the ‘Make in India’ program,” the expert said, referring to Delhi's initiative to facilitate foreign investment to India's manufacturing industries.

Speaking of other Russian aircraft, Frolov noted that only the Ansat model could compete with Ka-226.

“If we take Ka-28 or Ka-32, both of them are a bit too heavy and designed for other purposes. Also, India hardly needs a lot of them,” the expert concluded.

A representative for Russia’s Global Arms Trade Analysis Center told Sputnik that Russia’s main contenders in the bid would be the US companies and several European producers. The representative recalled the 2012 tender on the supply of 56 lightweight multipurpose ship-borne helicopters which was canceled in 2014.

“In the final round of the $900-million tender, the Italian-UK AgustaWestland company’s ship-borne AW-109 Koala version competed with Eurocopter AS565 Panther. These helicopters could be put forward with respective modifications for the new bid,” the representative said.

According to CAST's expert Barabanov, the United States might have difficulty joining the tender, as the US helicopters are heavier and more expensive than India plans to procure.

The contract for the tender winner is estimated to be worth some $3.18 billion.