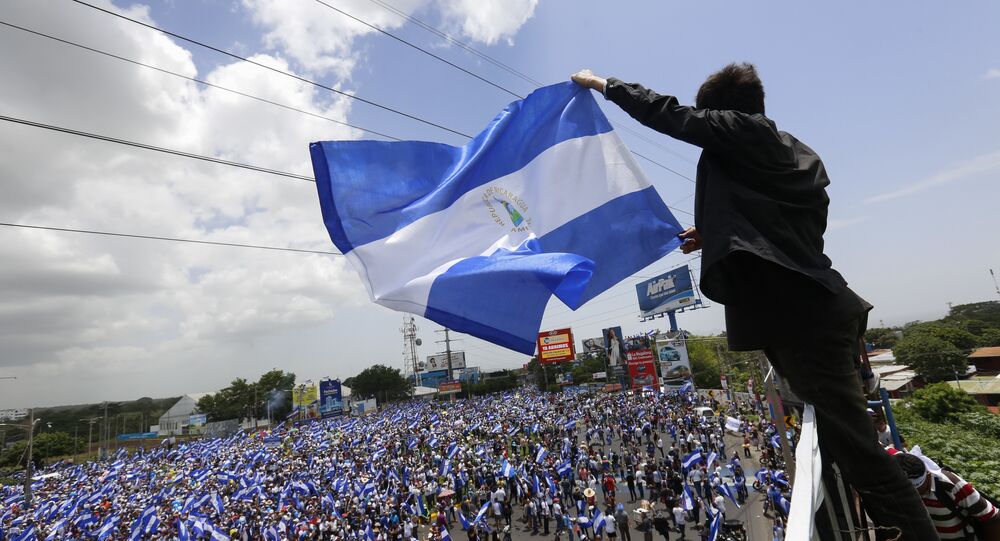 US Inflates, Misattributes Nicaraguan Deaths to Support Its Own Goals - Report

A new forensic analysis challenges the narrative forwarded by the White House and US Congress that says that Nicaraguan President Daniel Ortega has personally ordered or is responsible for the deaths of hundreds of protesters, arguing those figures are a shrewd and shameless manipulation of data.

A study performed by independent Nicaraguan researcher Enrique Hendrix, published July 8, concluded that Nicaraguan nongovernmental organizations have systematically misrepresented the death tolls from the protests by counting all unnatural deaths across the country between April 19 and June 25 as killings by Nicaraguan pro-government forces. Further, the study states that the US government has manipulated the facts even more by arbitrarily exaggerating those already-decontextualized death counts in order to further its own plans for regime change in the Central American country.

Hendrix described his conclusions, titled "Monopolizing Death," to journalist Max Blumenthal as "evidence of a campaign that, in the absence of a just cause, uses the death of every citizen as a motive to manipulate the emotions of the population in order to counterpose ‘the government' against ‘the people.'"

When protests broke out in Nicaragua on April 16 following the passage of a reform law that increased social security contributions by employers and employees while lowering the program's benefits, violence quickly followed, and since then, hundreds have been killed in what has nearly become an open civil war. Reuters noted at the time that the proposed changes included employees' social security contributions increasing from 6.25 percent to 7 percent of their salary, and employers' contributions increasing from 19 percent of salaries to 22.5 percent. Pensioners would also have received a 5 percent reduction in their payments, deducted as payment for medical expenses.

Despite the government revoking the resolution on April 23 after the first explosion of protests, the anti-government opposition has only increased, snowballing into a host of so-called "pro-democracy" groups comprising everyone from university students to Catholic clergy.

Sputnik has reported, and Ortega and others have repeatedly stated, that the opposition movement has extremely close ties to notorious US tools for manipulation of foreign governments to which it objects. Blumenthal told Sputnik on July 20 in an interview from inside Nicaragua that Felix Maradiaga, an opposition figure who "heads one of the main channels for money from the [US] State Department-backed USAid and the National Endowment for Democracy," was openly collaborating with the criminal gang Viper in the Central American country to help the US play at being world police.

Ortega told TeleSUR in an interview earlier this month that that the US has a strong presence in the country, funneling some $30 million in USAID financing into Nicaragua last year.

Dan Kovalik, a human rights and labor lawyer who visited the country with Blumenthal, told Sputnik, "The irony is that the opposition is saying, ‘We're being censored' — no, it's the opposition that's censoring the Sandinistas… it's actually the Sandinistas being hunted; they don't have control, and I think people have to realize that what is happening here is not some sort of revolution against the government. It is a counter-revolution, and it is being supported by the US."

The basis of that support by the White House and Congress is that, "The Russians have set up operations in Managua that pose a threat to US national security interests; Nicaragua continues to offer its unconditional support to Nicolas Maduro and his dictatorial regime in Venezuela; and according to Congressional testimony, Venezuela's PDVSA is also using its subsidiary in Nicaragua, ALBANISA, to launder money," as the NICA Act, passed last October by the US Congress to place economic sanctions on Nicaragua, alleges.

Ortega heads the Sandinista Liberation Front (FSLN), a democratic socialist party that originally seized power in 1979 when it threw out the corrupt Somoza family's dictatorship, an entity that enjoyed close US support for its anti-communist and anti-populist credentials. However, the US quickly took to funneling arms and support to the opposition group called the Contras, who waged a guerrilla campaign in the countryside against institutions of the Sandinista government, including clinics and schools, the centerpieces of the government's social welfare program.

Most notoriously, the administration of US President Ronald Reagan was found to be secretly selling arms to Iran, in violation of US law, in order to raise funds to support the Contras. The discovery of the Iran-Contra scandal in 1986, thanks to an investigative Lebanese newspaper, sent shockwaves through the Western hemisphere. Nonetheless, Ortega was forced to step down in 1990 after the Sandinistas lost a key election.

Ortega returned to office in 2006 with a plurality of the presidential vote, subsequently winning successive five-year re-elections in 2011 and 2016 and forming a key part of the Pink Tide movement of left-wing governments coming to power in Latin America.

On July 25 of this year, Republican Rep. Ileana Ros-Lehtinen, a Cuban-American exile and champion of the NICA Act, took to the House floor to whip up support for a resolution condemning Ortega, saying, "Mr. Speaker, four hundred and fifty! That is how many Nicaraguans have been killed by the Ortega regime and its thugs since April of this year."

Hendrix's study found that only 293 unnatural deaths have occurred in Nicaragua since the protests began, and only 59 of those who died can be definitively said to have been opposition figures.

The categories are: duplicated names (9); deaths unrelated to protests (51); people murdered by the opposition (21); opposition activists, including those involved in road barricades (59); innocent bystanders (46); names without significant data to determine the cause of death (77); and deaths omitted from each list.

Hendrix further noted that the NGOs' reports appear to be padded with the deaths of "victims of traffic accidents, altercations between gangs, murders by robbery, those killed by accidental firing of a firearm and even more absurdly, a suicide."

In other words, according to Hendrix's study, the opposition has killed at least as many Sandinista supporters and police officers as the government has killed protesters, a far cry from the narrative of the one-sided government crackdown, of "an armed state against an unarmed people," as opposition leader Juan Sebastián Chamorro told the New York Times for a story published July 22.

Despite the Nicaraguan government compiling its own findings on the deaths, the Inter-American Commission on Human Rights has refused to accept that data and has relied instead on CIDH, meaning only one side is being allowed to be heard.

Blumenthal has been in Nicaragua for two weeks "interviewing scores of victims of the US-backed Nicaraguan opposition," as he wrote July 30 on the Gray Zone Project, a publication he founded and for which he serves as senior editor.

Blumenthal describes another side to the opposition, a violent and well-armed faction. That description supports the conclusions drawn by Hendrix that the Nicaraguan government has not "monopolized death" by killing hundreds of demonstrators.

The journalist describes the kidnapping, torture and brutal execution of Gabriel de Jesus Vado, a police officer in Monimbo, a district in Masaya controlled by the opposition. The act was recorded being endorsed and justified by Harvin Padilla, a local Catholic priest.

As many as 20 other members of Nicaragua's national police have been killed, Blumenthal noted, not including those civilians killed by opposition paramilitaries. Congress and the White House erase deaths like these by counting all deaths in Nicaragua as caused or ordered by the Sandinista government.

The high death toll sustained by police is due in large part to Ortega's order for police forces to remain at their stations as a condition of negotiations with the opposition in late April. Because of that, for 55 days, Blumenthal noted, the police were both unable to respond to the dire threats to the civilian population, "a national crusade of lethal blood vengeance" against Sandinista supporters in which "countless citizens were beaten or faced property destruction at the hands of the opposition solely because they belonged to the Sandinista front."

The NYT has noted that the Catholic church initially took a moderate role in the protests, but that Monsignor Silvio José Báez, the auxiliary bishop of Managua, later "emerged as the face of the opposition."

Blumenthal says that during his time in Nicaragua, he "learned how members of CENIDH and ANPDH actively participated in the campaign to remove the Sandinista government. For instance, I was told by three separate students of the public university UNAN [National Autonomous University of Nicaragua] that CENIDH legal advisor Gonzalo Carrion was present with opposition students and militants when they took over the campus and that Carrion was even a bystander to their violence."

UNAN was torched by protesters on July 13, just hours after Ortega renewed his call for peace. TeleSUR reported at the time that the protesters also burned a medical center and set light to a university pavilion.

The journalist noted that ANPHD was founded in Miami, Florida, in the 1980s by the US government's National Endowment for Democracy to portray the Contras as "victims of communist brutality," a role it retains in the 21st century.

All this paints a very different picture of the events in Nicaragua since April, one that continues the United States' long pattern of manipulating in Central American affairs in defense of its own interests.

Ortega Slams US for Financing Violence in Nicaragua, Destabilizing the Country