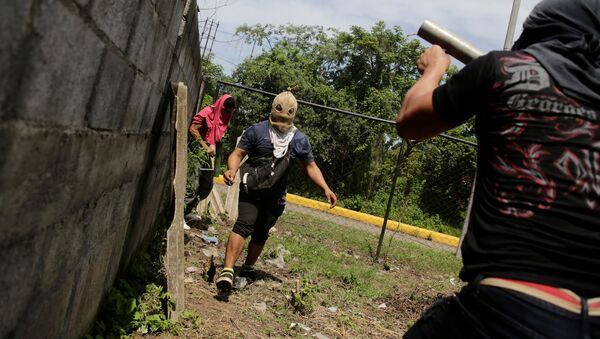 Three months since protests first began in Nicaragua, leading to the deaths of hundreds, the continuous unrest is panning out to be "an all out attack on the public sector," Max Blumenthal, the senior editor of Grayzone Project, told Sputnik.

The Central American country has come under fire, with critics claiming that Nicaraguan President Daniel Ortega is trying to establish a dynasty similar to that of the Somozas, a US-backed family dictatorship that ruled the country from 1936 to 1979.

​Although corporate media has been reporting that the Nicaraguan government is in the wrong and that protesters are revolutionaries simply trying to mend the situation, Blumenthal told Radio Sputnik's Loud & Clear on Thursday that it just wasn't the case.

"We have met with people who are facing campaigns against Sandinismo unlike any other in Nicaraguan history, and I'm fully aware of what took place in the 1980s when the US armed the opposition, armed the Contras," Blumenthal told hosts Brian Becker and John Kiriakou.

"What's happening now is unprecedented because people who are simply sports reporters for leftist radio stations like Radio YA… which has served the community and provided social services… these people are living in terror; they are hunted at night; they have to sleep inside what's left of the radio station," he continued.

​"What we're not told is that basic people who just simply want to participate in this government and serve their community are facing intimidation and even are being murdered in a way that didn't happen in the ‘80s because the Contras did not penetrate Managua."

Watchdog: US Sanctions Would Boost Civic Insurrection in Nicaragua

And this isn't the only revelation that Blumenthal says he has discovered since he arrived in the country — there's also the question of US involvement.

"The other dimension… is the level of US interference, the way that the US crafted this uprising, the way that it was designed months, if not, years in advance," he told Becker.

Dan Kovalik, a human rights and labor lawyer who is visiting the country with Blumenthal, also offered his thoughts on the media coverage.

"The irony is that the opposition is saying, ‘We're being censored' — no, it's the opposition that's censoring the Sandinistas," Kovalik said. "It's actually the Sandinistas being hunted; they don't have control, and I think people have to realize that what is happening here is not some sort of revolution against the government. It is a counter-revolution, and it is being supported by the US."

​When asked whether it was possible for Nicaraguans to peacefully protest, Blumenthal stressed that the chances were slim, considering constant attacks by armed oppositions figures.

"What we're seeing is an all out attack on the public sector, an attack on the base, the spine that holds the working poor together and prevents them from sinking into extreme poverty," he told Kiriakou.

According to Blumenthal, the US tapping into its love of playing world police in Central America was realized through the alleged open collaboration between the criminal gang Viper and Felix Maradiaga, an opposition figure who "heads one of the main channels for money from the [US] State Department-backed USAid and the National Endowment for Democracy."

​It should be noted that Maradiaga has denied accusations that he has any ties to or is leading the criminal gang in anyway.

"What we're looking at is not a bunch of technocratic, hopeful, idealistic students," Blumenthal said. "We're looking at a counter-revolution using as muscle hardcore criminal elements and these are the figures who man the… roadblocks which paralyzed Nicaragua's economy until now and basically prevented any growth from taking place in the economy this year."

"There have been scores and scores of deaths, many on the opposition's side, but the question is: How would this government have survived if didn't respond with some level of force?" he asked.