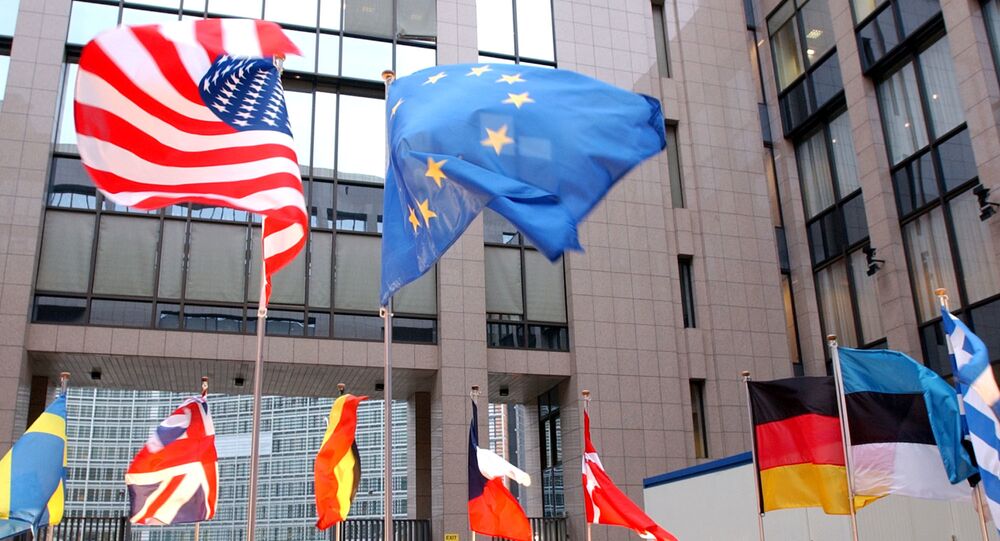 The EU might struggle to deliver on its promise to increase soy imports from the US, a top German official has admitted, but the recent bilateral framework deal has opened a path to productive talks and a likely free trade agreement between Washington and Brussels.

Kristian Rouz — US-EU trade tensions have eased after last week's meeting between US President Donald Trump and European Commission President Jean-Claude Juncker. However, the single currency bloc is not ready to meet one of key Trump's requests for the EU to import an increased volume of American soybeans.

This is according to German Agriculture Minister Julia Kloeckner, who also pointed to the improved bilateral trade relations in a recent interview. She cited the deal reached by Trump and Juncker this past Wednesday, which — in the EU's view — has allowed them to avert a full-out transatlantic trade war.

© REUTERS / Stoyan Nenov
Macron Says 'Not in Favor' of Vast Trade Deal Between EU, US
Kloeckner said EU officials are currently discussing the volumes of American soy the bloc could import without dealing significant damage to European farmers. Brussels has expressed concerns about the increased agricultural exports from the US could dampen prices on the domestic EU market.

For his part, Trump said he expects the EU to increase imports of US farming products in the wake of the agreement, whilst a broader trade deal would require a tough compromise on cars and other manufactured goods.

"Will we be able to do whatever President Trump wishes? I don't know. Let's see whether this will be the case or not," Kloeckner said.

© REUTERS / Joshua Roberts
Economics Professor on US-EU Deal: 'Trump Needed to Tout Some Kind of Win on Trade Front'
EU agricultural producers have recently struggled to increase their own exports to third-party countries, although Brussels has recently concluded a sweeping trade deal with Japan — one of the world's key importers of agricultural goods.

Despite the uncertainty, Germany appears to be quite interested in setting the transatlantic trade spat. Recent macroeconomic figures — including composite Purchasing Managers' Index (PMI) — have shown the EU's largest economy has already been affected by the trade uncertainty.

"(German companies) wait and see whether US President Trump imposes car tariffs and extends tariffs on Chinese goods. And, of course, exporters hope for the best," Andreas Rees of UniCredit said. "There is the non-negligible risk that German companies could be hit by a double whammy going forward. Carmakers are getting less competitive in the US."

Meanwhile, US officials expect the EU to import some 15.3 million tons of soybeans for the 2018/19 harvest year, as suggested by a report from the US Agriculture Department. Trump has promised Juncker he would refrain from slapping car tariffs on the EU — alleviating some of the aforementioned concerns.

© AP Photo / Pablo Martinez Monsivais
Juncker Told Trump EU Would Help US Deal With 'China Problem' – Trump Adviser
But the EU has shown no signs of hurry to reciprocate.

The German Agriculture Minister pointed to the mounting anxiety amongst US farmers of the possible loss of overseas markets due to retaliatory tariffs imposed by other nations. Brussels appears to be confident an impending drop in crop prices in the US domestic market would boost the EU's bargaining power in the upcoming talks with Trump administration officials.

"A lot of US farmers are currently under a lot of pressure caused primarily by the reactive tariffs and they are suffering a lot," Kloeckner stressed. "I think this has really helped Trump to understand that these tariffs can be potentially harmful and he has now reined them in and we are moving towards a more positive situation."

However, the Trump White House has announced measures of fiscal accommodation for farmers affected by retaliatory tariffs imposed by foreign governments. These include direct payments, as well as measures of indirect support.

READ MORE: US Tariffs on Steel, Aluminum to Remain in Place During Talks With EU — Ross

© Photo : Nord Stream 2
Trump's Wishful Thinking: Why EU is Unlikely to Become 'Massive Buyer of US LNG'
Despite some — including the renowned libertarian, Sen. Rand Paul — criticizing the move as giving farmers  $12-billion "golden crutches" amidst crippling trade tensions, while fiscal accommodation at home is expected to boost US bargaining power overseas.

In a separate interview, Kloeckner pointed out that up to now, the EU has relied on soy imports from South America to feed its livestock, and increased imports from the US would likely mean reduced imports from the EU's current main supplier. This would allow it to avoid a dramatic drop in crop prices on the internal EU market.

The framework agreement between Trump and Juncker thus poses "no disadvantages for European farmers of any kind," Kloeckner stressed.