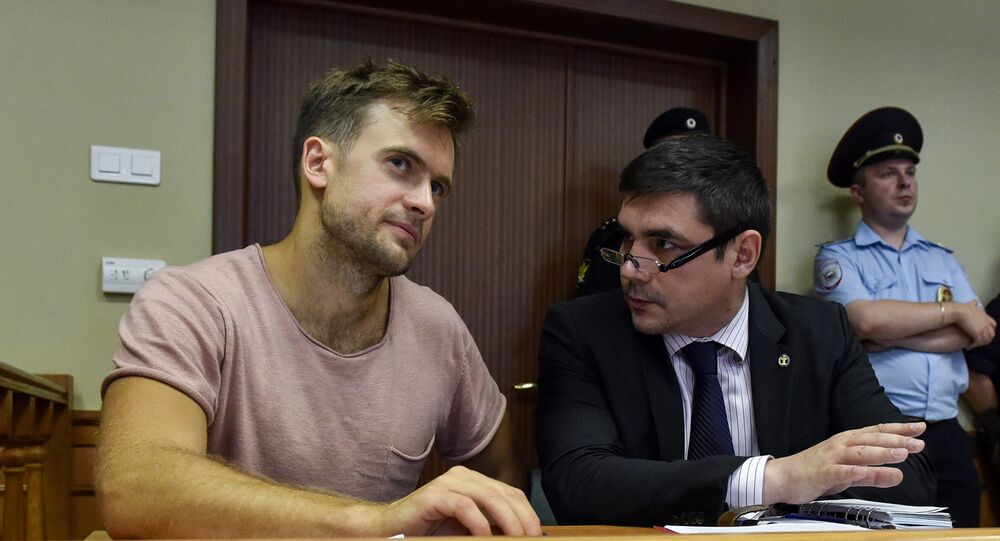 MOSCOW (Sputnik) - A Moscow court has fined Pussy Riot’s producer Petr Verzilov 1,500 rubles (about $24) for illegally wearing police uniform when running onto the pitch of Moscow's Luzhniki Stadium during the World Cup final, a Sputnik correspondent reported from the courtroom on Wednesday.

“To find Verzilov guilty and fine 1,500 rubles along with confiscation of the uniform,” the judge announced the verdict.

When denied a request to have the police officers who inspected and confiscated the uniform to testify in court, Verzilov’s attorney Nikolay Vasilyev asked for their records to be excluded from the evidence, but this request was also turned down.

On July 15, three young women and a man dressed in police uniforms invaded the pitch during the second half of the World Cup final and were immediately removed by the security and taken to a police station to fill in administrative offense reports. Pussy Riot has claimed responsibility for the incident.

On July 19, their defense filed an appeal.

© Flickr / Роман Magician
Pussy Riot Cause a Whimper on US TV Show House of Cards
Verzilov along with Olga Kuracheva, Veronika Nikulshina and Olga Pakhtusova were earlier charged with a "violation of spectator's conduct during an official sporting event" and sentenced to 15 days in detention. They were also banned from attending sporting events for three years.

The group achieved notoriety after its 2012 performance in Christ the Savior Cathedral in Moscow. Three participants in the performance were detained. In August 2012, three of the band members — Maria Alyokhina, Nadezhda Tolokonnikova and Yekaterina Samutsevich — were sentenced to two years in prison for hooliganism.