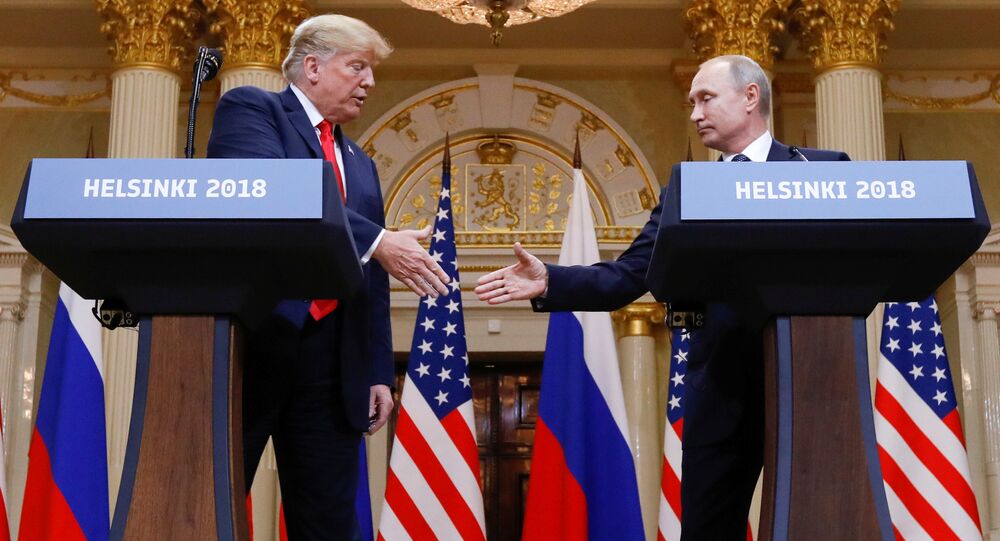 The US president said that he had a great meeting with Russian leader Vladimir Putin in Helsinki, and lamented that the liberal American media are trying to present these contacts in a negative light by all means.

On July 19, the US president expressed hope to have his next meeting with Putin in Washington so that the two leaders could begin to implement the ideas that they had discussed during the Helsinki summit.

I had a GREAT meeting with Putin and the Fake News used every bit of their energy to try and disparage it. So bad for our country!

The two presidents had a one-on-one private conversation discussing the Syrian refugee crisis, the situation in Ukraine, denuclearization of the Korean Peninsula and Russia's alleged meddling in the 2016 US presidential election.

© AFP 2021 / Yuri KADOBNOV
Soccer Ball Given to Trump By Putin Gets Security Screening
Since Donald Trump won the 2016 presidential election, US authorities have been investigating allegations of possible collusion between his campaign team and Russia, claiming that Moscow had allegedly meddled in the election process in order to help Trump defeat Clinton.

Moscow has repeatedly denied any involvement in the election, stressing that no accusations against Russia have been substantiated.