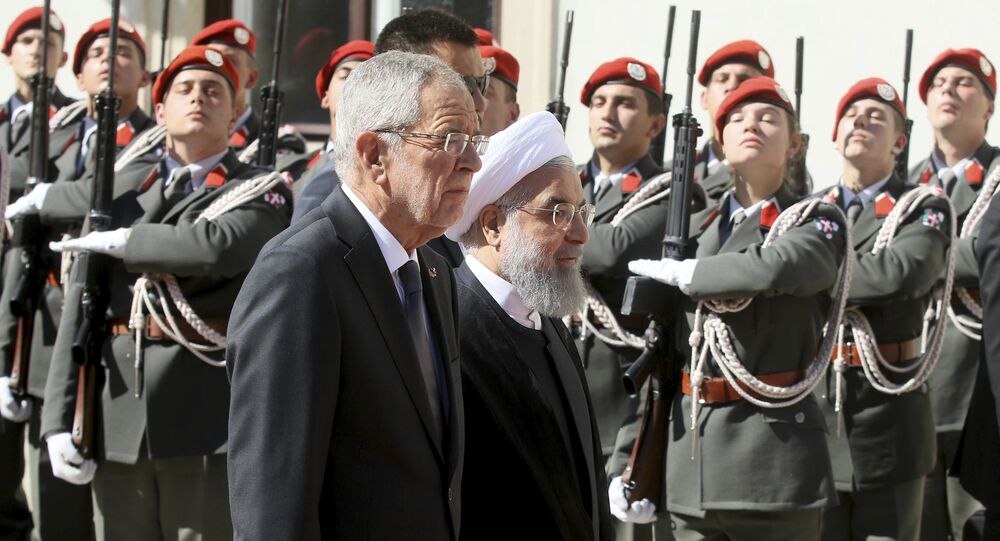 "Austria regrets the US pullout from the JCPOA. We also regret the US decision to reimpose sanctions on Iran. This does not concern the so-called primary sanctions against Iran, but the secondary sanctions which affect Austria, too. We believe that these secondary sanctions violate international law due to their extraterritorial nature," Van der Bellen told reporters after his talks with Iranian President Hassan Rouhani in Vienna.

The European Commission supports this position against the United States’ decisions related to the JCPOA, the Austrian president added.

Rouhani on Future of JCPOA

His Iranian counterpart Hassan Rouhani, in his turn, said that Tehran would remain in the deal, provided that the country is able to benefit from it.

"We will not withdraw from the JCPOA if we are able to benefit from it," Rouhani said after talks with his Austrian counterpart Alexander Van der Bellen.

Rouhani specified that Iran would stay in the deal if the remaining signatories to the agreement manage to ensure Iran’s interests after the US pullout from the agreement.

The Iranian president also stressed that the remaining signatories to the JCPOA had demonstrated firm political will.

Wikimedia Commons / Gage Skidmore
Trump: US to Go Ahead With Secondary Sanctions Against Companies Doing Business With Iran
Rouhani is currently on his European trip aimed at discussing the future of the JCPOA after the US withdrawal with EU member states. On Monday and Tuesday, the Iranian president visited Switzerland, after which he arrived in Austria.

EU officials have repeatedly criticized the extraterritorial nature of sanctions imposed by the United States on the countries considered by Washington as its adversaries.

After the US withdrawal from the JCPOA, other signatories — Iran, China, France, Russia, the United Kingdom, Germany, and the European Union – said they would abide by it. Moreover, EU leaders asked the United States to grant sanctions waivers to the bloc's companies cooperating with Iran.

Nord Stream 2 Financing Won't Depend on US Sanctions – Venture Executive