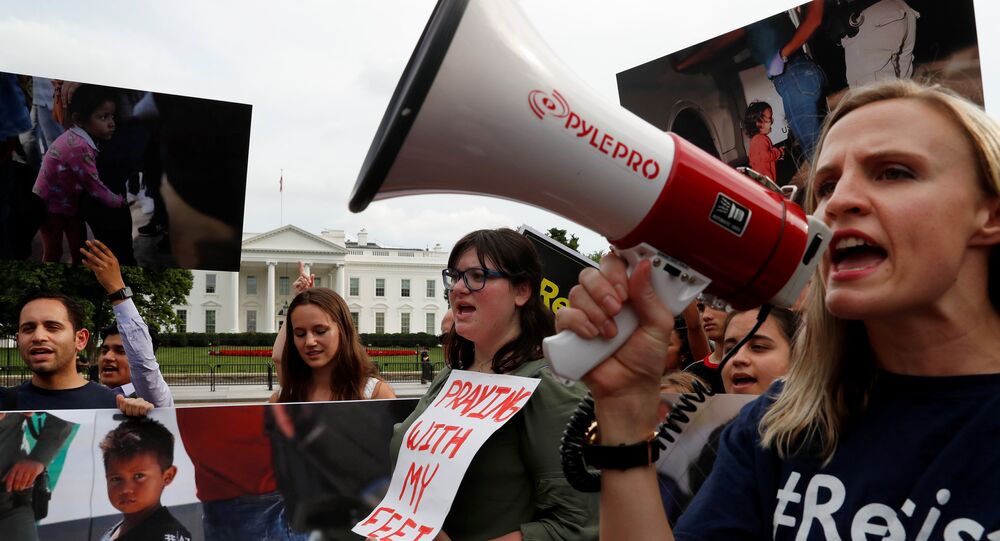 On Saturday, hundreds of demonstrations were held across the world protesting US President Donald Trump’s ‘zero tolerance’ immigration laws.

Over 750 ‘Families Belong Together' rallies took place in all 50 US states on Saturday, as well as in London, Munich, Paris, Hamburg and Tokyo, Common Dreams reported.

​"The Liberal Left, also known as the Democrats, want to get rid of ICE, who do a fantastic job, and want Open Borders. Crime would be rampant and uncontrollable! Make America Great Again," Trump, who spent Saturday playing golf at his New Jersey resort, tweeted Sunday.

Trump's zero-tolerance immigration policy has resulted in some 2,000 immigrant children being forcibly separated from their parents, after crossing the US border without documentation, according to the Department of Homeland Security (DHS).

"Donald Trump and his administration have cruelly separated thousands of children from their families. Now they're jailing families-and they haven't yet reunified the families already brutally torn apart," the Families Belong Together coalition noted.

"But we won't allow it to continue. On June 30, we're rallying in Washington, DC, and around the country to tell Donald Trump and his administration to permanently end the separation of kids from their parents. End family internment camps. End the 'zero-humanity' policy that created this crisis. And reunify the children with their parents."

​In April, the Trump White House announced its zero-tolerance policy, promising to pursue criminal charges to the fullest extent of the law against those who cross the US-Mexico border without correct documentation.

"Attorney General Jeff Sessions today notified all US Attorney's Offices along the southwest border of a new ‘zero-tolerance policy' for offenses under 8 USC § 1325(a), which prohibits both attempted illegal entry and illegal entry into the United States by an alien," the US Department of Justice said in a June news release.

Since that time, almost 2,000 immigrant children have been forcibly separated from their parents between April 19 and May 31, prompting harsh criticism from rights groups, and lawmakers from both the Democratic and Republican parties.

Last Wednesday, Trump — following significant political blowback from the wildly unpopular practice of separating children, including infants, from their parents — signed an executive order that purportedly stopped the separations.

​The White House move followed leaked videos and images of weeping children locked in cages, sparking outrage across every facet of the political spectrum and drawing international horror.

But the well-attended Saturday protests appeared to be a response to the fact that the Trump zero-tolerance policy nonetheless remains in place. The Wednesday Trump order directed Sessions to seek changes in what is referred to as the ‘Flores' settlement agreement in order to detain children over longer periods.

Flores v. Reno was a 1997 federal court ruling that sharply limited the amount of time immigrant children can be placed in detention, a limitation that forms the basis for the government's present policy of separating them from their parents, categorizing them as "unaccompanied immigrant children."

Dozens of US Lawmakers Protest Delivery of F-35s to Turkey