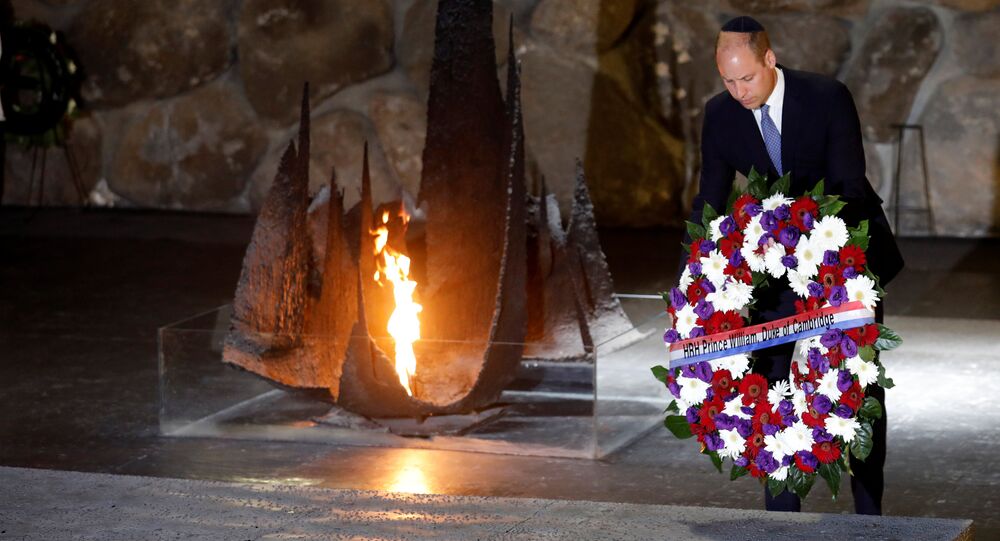 As part of a wider Middle East tour, the second-in-line to the House of the Windsor throne has touched down in Israel, the first-ever official visit by a member of the British royal family to the country London once ruled with an iron fist.

Prince William arrived in Tel Aviv the night of June 25 from Jordan, and was taken to King David Jerusalem Hotel. Any hope of a restorative night's slumber before his thoroughly crammed schedule kicked into gear the next morning was immediately shattered when staff confronted him with tea imported from England — the "best we can buy" — as well as fresh milk, cream and strawberry jam for his scone, and an eternal question — whether jam or cream should be spread on the prandial delight first.

Great honor to welcome HRH Prince William @KensingtonRoyal @RoyalFamily on his historic official visit to #Israel — a celebration of the deep & profound relations between our countries! 🇮🇱🇬🇧 pic.twitter.com/GZyP9llzx2

​"We heard there's a big debate in England about whether you put the cream or the jam on first, so we'll leave them to the side and let the Prince decide," Sheldon Ritz, the hotel's director of operations, told Jewish News.

Prince William is staying at the King David Hotel, the scene of the Irgun terrorist atrocity in 1946 which killed 91 people. Here's my article for Middle East Eye: https://t.co/uirIkkTEs9

​While his answer — if one was forthcoming — hasn't been reported, what's certain is the Duke will stay for three nights at the King David, a former British headquarters which was bombed by Jewish militants in 1946, killing 91.

From Tel Aviv, he journeyed to Jerusalem to visit the Yad Vashem Holocaust memorial, where William toured the Holocaust History Museum and the Museum of Holocaust Art, and signed the museum's guestbook.

Duke’s message in @yadvashem book: I’m honoured my own great grandmother is Righteous Among Nations. We must never forget’#RoyalVistIsrael pic.twitter.com/aYH2QkWTgE

​"It has been a profoundly moving experience to visit today. It's almost impossible to comprehend this appalling event in history. Every name, photograph and memory recorded here is a tragic reminder of the loss suffered by the Jewish people. The story of the Holocaust is one of darkness and despair, questioning humanity itself," he wrote.

William also took part in a wreath laying ceremony, and met with Paul Alexander and Henry Foner, two survivors of the 'Kindertransport', which before the outbreak of World War II helped bring thousands of Jewish children from across Europe to Britain.

Yad Vashem has recognized his great-grandmother, Princess Alice, as part of the Righteous Among the Nations for her role in rescuing Jews during the Holocaust — she is said to have hidden three members of a Jewish family in her palace in Athens during the Nazi occupation of Greece. Thanks to her protection, the family survived and today lives in France. The Princess died in 1969 and in 1988 her remains were brought to Jerusalem.

Prince William is heading to the Israeli prime minister's residence shortly. He'll be received by Bibi Netanyahu (who police want to charge with bribery) and Sara Netanyahu (who was charged with fraud last week).

​Both William's father, the Prince of Wales, and grandfather, the Duke of Edinburgh, have previously travelled to Israel privately — however, the Duke's visit comes at at the request of the UK Government, a first in Israel's 70-year history. From Tel Aviv, he will visit Ramallah and Jerusalem, and meet with Israeli Prime Minister Benjamin Netanyahu, President Reuven Rivlin, the president, and Mahmoud Abbas, the Palestinian Authority head.

Just saw Prince William’s motorcade enter Jerusalem (as I make my way in the opposite direction). Welcome to the capital of Israel, Your Royal Highness! 🇬🇧🇮🇱 pic.twitter.com/JxTqjvG2XX

​While William has so far received a thoroughly warm welcome across the country, his visit has already proven controversial with Israeli authorities, as his official itinerary describes Jerusalem's Old City — which he is expected to tour June 28 — as being part of the 'Occupied Palestinian Territories'. Jerusalem Minister Ze'ev Elkin has accused him of "politicizing" the trip — but British embassy officials have been quick to dismiss such accusations.

Nonetheless, the UK is no stranger to stirring up trouble in the region — three decades of rule from London, and military occupation by British forces, between the world wars was pivotal in creating much of the friction and fault lines that typify the modern Israeli-Palestinian conflict. Ever since, the US has taken the leading role in mediating peace efforts, with Whitehall and the royal family alike largely reticent to involve themselves directly in the region's tempestuous politics.