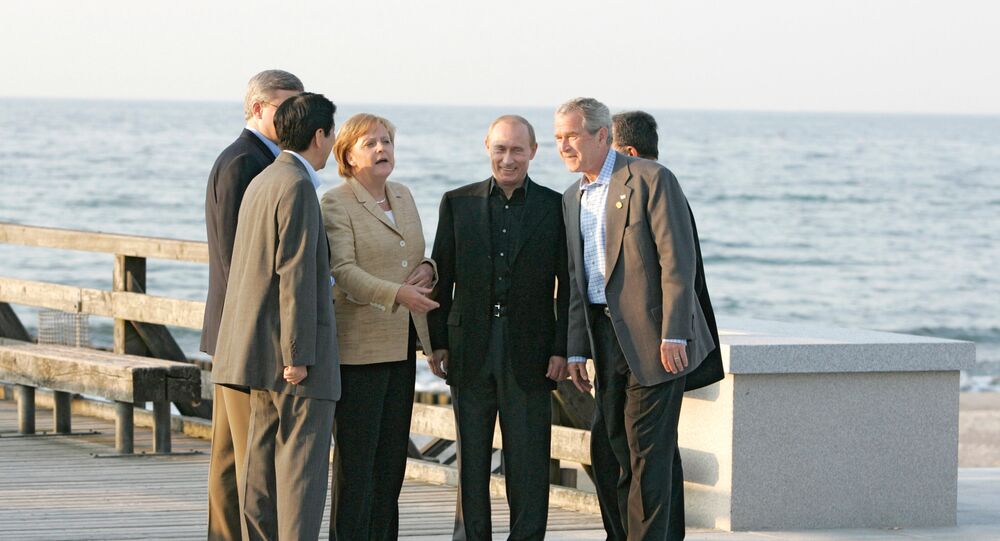 Kremlin on Trump's Call for Russia's G8 Return: We Are Focused on Other Formats

The summit will officially start Friday in the Canadian province of Quebec and run until Saturday. US President Trump is expected to leave the summit early to fly to Singapore, skipping the climate session. Russia announced its permanent withdrawal from the G8 in 2017; the group was thereafter renamed the G7.

"Russia is focused on other formats, apart from the G7," the spokesman stated, referring to formats for interaction between governments such as the G7 forum and BRICS.

The comment followed US President Donald Trump's statement, made earlier on Friday, on his way to the meeting in Canada:

"Why are we having a meeting without Russia? I would recommend, and it is up to them, but Russia should be at the meeting," President Trump said of the G7 summit. "They should let Russia come back in because we should have Russia at the negotiating table," Trump noted.

Russia was part of the group until 2014 — then referred to as the G8 — when the seven states boycotted the summit in Sochi and suspended Russia's participation in future meetings citing disagreements over the Ukrainian crisis.

Other G7 members have expressed the mixed reaction to the Trump's call: while Canada opposed it, Macron, German Chancellor Angela Merkel, British Prime Minister Theresa May and new Italian premier Giuseppe Conte welcomed the move, with the latter saying that "it's in everyone's interest".

Later in the day, some UK government sources told Reuters that Moscow should change its approach before any conversations on Russia's rejoining the G8 might take place, explaining "we should remind ourselves why the G8 became the G7".

"The common European position is against the return of Russia," a senior aide to Macron told reporters, although the leaders did leave open "the possibility of establishing a dialogue" with Moscow.

The reaction of EU Top Officials

The European Union's officials have demonstrated a lot approach to the Trump's motion: EU Commision Head Jean-Claude Juncker stated that the G7 group planned to maintain relations with Moscow and the relevant topic to be discussed at their meeting, while the EU Council Chief Donald Tusk insisted that the G7 should remain unchanged.

"This morning I had the first and very good, promising meeting with Italy's Prime Minister Giuseppe Conte and I am convinced that here at the G7 we will have a fully united European position on all issues. Including on Russia. I am not talking about details but about the more general common line," Tusk noted.

Commenting on the sidelines of the G7, German Chancellor Angela Merkel told reporters on Friday that it was too early to state whether leaders would issue a common communique, adding that if they failed to do so it would be an acknowledgement that no agreement had been reached.

Trump's Expectations From the G7 Meeting

Ahead of the meeting, Trump revealed that he expected trade tensions to ratchet higher amid the continuous disputes over Washington's tariffs on steel and aluminum.

The US president took to Twitter to express his expectations from the meeting, as well as to re-state his criticism of US trade allies.

In one of the follow-up messages concerning the meeting, Trump once again mentioned "unfair trade practices", affecting, as he described, the United States.

I am heading for Canada and the G-7 for talks that will mostly center on the long time unfair trade practiced against the United States. From there I go to Singapore and talks with North Korea on Denuclearization. Won’t be talking about the Russian Witch Hunt Hoax for a while!

The US president has also reacted to the statements of French President Emmanuel Macron, who said in a press briefing the day before that the French and Canadian delegations would try to persuade Trump at the G7 summit to pursue a more conventional path on trade amid his imposition of tariffs on the European Union and Canada.

Following the stiff reaction from Canada and France to the recently-imposed US tariffs, which they aim to discuss during the meeting, the White House announced a change of plans, saying that Trump will leave Quebec before the summit ends, flying directly to Singapore for his highly anticipated meeting with North Korean leader Kim Jong Un.