"Today, the US Department of the Treasury’s Office of Foreign Assets Control (OFAC) designated five Iranian individuals who have provided ballistic missile-related technical expertise to Yemen’s Huthis, and who have transferred weapons not seen in Yemen prior to the current conflict," the statement said.

The Treasury explained that the US move to impose sanctions comes after the United Nations Panel of Experts confirmed in January that missiles used by the Houthis to attack Saudi Arabia were of Iranian origin.

"The United States will not tolerate Iranian support for Huthi rebels who are attacking our close partner, Saudi Arabia," Treasury Secretary Steven Mnuchin said in the statement. "All countries in the region should be on guard to prevent Iran from sending its personnel, weapons, and funds in support of its proxies in Yemen."

Mnuchin specified that all five of the Iranians targeted are associated with the IRGC's Qods Force, a military unit that commands operations outside Iran, and with the Islamic Republic's ballistic missile program.

Yemen's Houthi rebels, also known as the Ansar Allah group, have been battling the government of Abdrabbuh Mansur Hadi since 2015. A Saudi-led coalition of mostly Persian Gulf nations has been carrying out airstrikes against the Houthis at Hadi's request since March 2015.

In response, the Houthis have launched several ballistic missiles into Saudi Arabia, with the most recent attack occurring on May 9.

Iran's Revolutionary Guard has denied accusations that it supplied the Houthis with missiles. 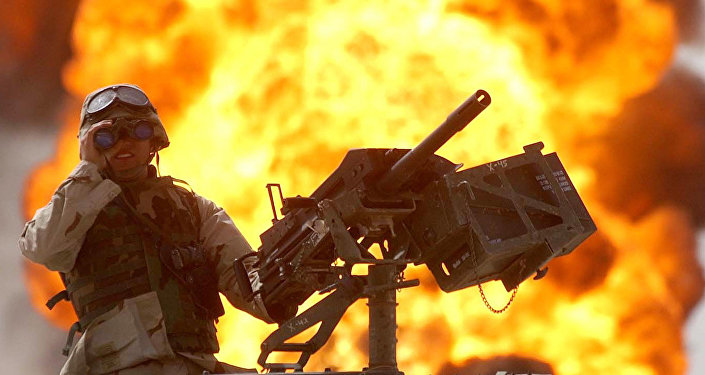 © AP Photo / Yonhap/Jin Sung-chul
Euro-Priced Iranian Oil Gives US Same Pretext It Used to Attack Iraq, Libya – Analyst
A week ago, the US Treasury has sanctioned six individuals, including Valiollah Seif, the head of Iran's central bank, over alleged ties to the Islamic Revolutionary Guard Corps (IRGC) and the Hezbollah movement, which Washington considers to be a terrorist group. Iraq-based Al-Bilad Islamic Bank has also been included in the sanction list for allegedly moving funds on behalf of the IRGC to Hezbollah. As the Treasury explained, the punitive measures against Iran cut the country off from use of critical banking network.

According to the Treasury, the latest raw of sanctions are a part of US President Donald Trump's "aggressive campaign" against the IRGS. This is already the third batch of US' anti-Iranian sanctions since Trump's announcement on the pullout from the Iran nuclear deal, also known as the Joint Comprehensive Plan of Actions (JCPOA).

US President Donald Trump has been publicly criticizing the deal since his election campaign and on May 8 he announced that the US was withdrawing from it. The agreement was designed to prevent Iran from acquiring its own nuclear weapons and to ensure the peaceful nature of its nuclear program.