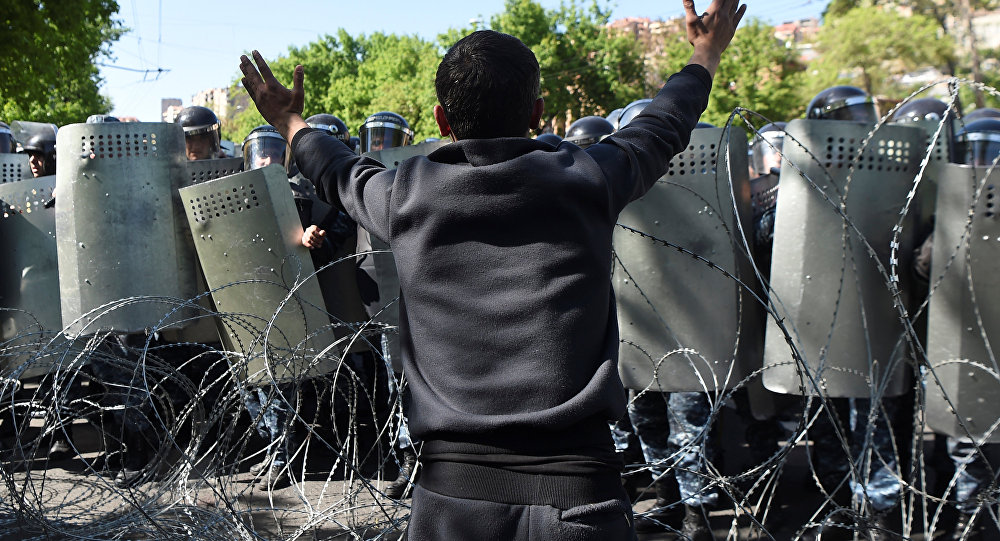 YEREVAN (Sputnik) - Mass protests against the election of former Armenian President Serzh Sargsyan as prime minister were held in Armenia for the eighth consecutive day on Friday, with the authorities of the republic, including incumbent leader Armen Sarkisian, calling for a dialogue.

On Friday, dozens of Yerevan streets and several major roads connecting regional cities to the capital were blocked by crowds of activists and vehicles, after opposition lawmaker Nikol Pashinyan, who leads the protests, announced the start of "road wars." Activists also rallied in Armenia's second largest city, Gyumri, where they attempted to block a highway leading to Yerevan.

According to the latest information, 233 people were detained and taken to various police departments on Friday. All of them were later released.

The protests began on April 13. The opposition accuses Sargsyan of ineffective governance of the country, the deterioration of the economic situation, as well as of changing the nation’s political system to ensure he can stay in power. On Monday, the protesters tried to break into the parliament building. Dozens of them were injured in the clashes with police. Despite protests, Sargsyan was elected prime minister by the Armenian parliament on Tuesday. On the same day, protesters announced the beginning of a "velvet revolution" in Armenia.

​Sargsyan served two five-year consecutive terms as president until April 9. His election as prime minister is largely regarded as an attempt to get around presidential term limits, since the 2015 constitutional amendments transferred governing powers from the president to the head of the government.

On Thursday, Sargsyan stated that he had no desire to apply coercive measures to protesters. The law enforcement agencies remain self-restraining and would not like "the proportionality of the forms of protests to be disrupted, so that the police were forced to use force," he said.

© Sputnik / Asatur Yesayants
Over 200 People Detained as Anti-Government Protests in Armenia Enter Eighth Day (PHOTO, VIDEO)
The situation in Armenia was addressed by Ignacio Sanchez Amor, the chair of the General Committee on Democracy, Human Rights and Humanitarian Questions of the OSCE Parliamentary Assembly. In a press release, he welcomed "the civic engagement of people turning out to exercise their right to freedom of expression through peaceful protest." At the same time, he recalled that the right to peaceful protest "does not enable demonstrators to force their way into buildings and disrupt proceedings." Amor urged all parties to return to a constructive dialogue.

On Friday, one of the most authoritative hierarchs of the Armenian Apostolic Church, the Catholicos of the Great House of Cilicia, Aram I, arrived in Yerevan. In an interview to Cilicia TV, he stated the inadmissibility of bloodshed in Armenia.

"The rallies held in Yerevan in recent days are an expression of protest, but whatever the reasons for the protests are, it is impermissible and unforgivable to shed Armenian blood on our native sacred ground. Clashes between our youth and the police are unacceptable and inexcusable," the hierarch said.

It is necessary to jointly discuss and seek ways to solve problems under the patronage of the president and with the efforts of all forces representing the people, in an atmosphere of mutual love and understanding, he said.

​Aram I already met with Sargsyan in Yerevan and welcomed the authorities' readiness for dialogue.

On Thursday, Sarkisian also called for a dialogue. He said that there were many social and economic problems in the country that require an early solution. According to the president, the only way out of this situation is dialogue, tolerance and the ability to listen to each other.

In the evening, the opposition held another rally. Pashinyan's supporters gathered on the Republic Square in the center of Yerevan. They announced plans to continue protests on Saturday morning.

​The opposition lawmaker repeatedly called for the replacement of the authorities, without specifying how he saw the future governance of Armenia in this case.

On Friday, Pashinyan said that the operation to block roads, if started, would bring the opposition closer to victory. In his opinion, the blockade of transport communications should show that "Sargsyan does not control the situation in the country."