Previously a top-level White House strategic adviser, Steve Bannon, fired by US President Donald Trump, suggested in an interview with Italian newspaper La Stampa that Russia is a natural ally to America - as well as to the western world - against what the former political staffer refers to as Washington’s true adversaries: China, Iran and Turkey.

Bannon, 64, said that he is familiar with Russians because he fought against them during the first Cold War, while serving as a junior surface warfare officer on a US Navy destroyer, the USS Paul F. Foster. The right-wing media editor was also an assistant to a four-star admiral at the Pentagon in the 1980s working on denuclearization issues.

The sometime investment banker asserted that Russia is not a threat to the western world because it is a "natural ally." The true rivals of Washington, the former Hollywood producer declared, are "in Beijing, Tehran and Ankara."

Bannon went on to declare that China's One Belt One Road initiative is actually a ruse to unite "three countries that have developed from ancient belligerent civilizations and are alien to the Judeo-Christian culture," cited by La Stampa. 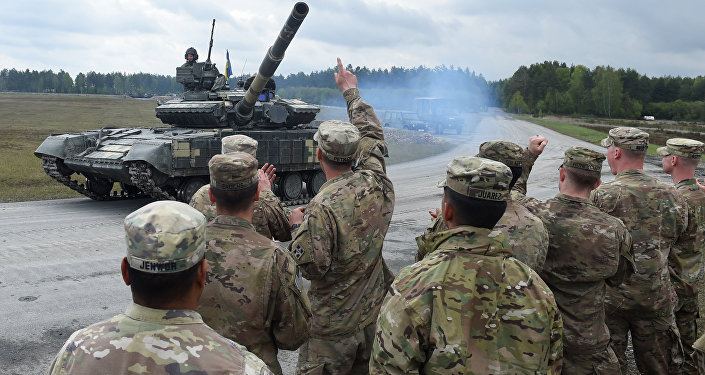 © AFP 2019 / Christof STACHE
Russia to Challenge US Military Superiority in Europe by 2025 - US European Command Head
The former editor made a claim that "Russia is a white anti-Islamic country, it belongs to our European-American world that has to protect itself from the real rivalries — China, Iran and Turkey."

The political gadfly and active lobbyist traveled to Rome ahead of the country's March 4 parliamentary elections to express his support for one of the candidates, Matteo Salvini, a vocal supporter of candidate Trump in 2016.

According to election results, eurosceptic parties received a majority of votes, performing particularly well among youth, as over half of voters aged 18-30 supported their nationalist platform.

The populist Five Star Movement won over 32 percent of the vote, while around 17.7 percent of voters favored Salvini's Lega party, signaling a significant increase in that party's support base. Due to a hung parliament result, negotiations are ongoing to form a coalition government.

Bannon, known for his outspoken and often incendiary opinions, clarified his support for Salvini's anti-EU politics.

"[Leader of the Five Star Movement Luigi] Di Maio looks left, he wants to be like Obama and Macron and seeks the agreement with the Democrats, while [Lega leader Matteo] Salvini is closer to the people and he thinks about fighting free trade and migration," Bannon claimed.

"I dream of seeing the two rule together," the pundit opined, adding, "In a different manner they convey the same phenomenon and represent over a half of the voters with smaller parties."

© AP Photo / Mary Altaffer
Ex-Trump Campaign Chief Lewandowski Comes to US Congress to Testify in Russia Probe
Italy's recent election results showcase a "rebellion of the deprived" and make Italy "the heart of revolution," according to Bannon, who has been accused of being a white nationalist.

In America, the failed political strategist remains under investigation for involvement in alleged collusion between Russia and Trump's 2016 campaign.

Before being forced out of the White House in August, 2017, Bannon was a key figure in Trump's successful campaign bid and was for a time considered to be Trump's chief political strategist.

Putin: Blame Game Between US, Russia 'Road to Nowhere'