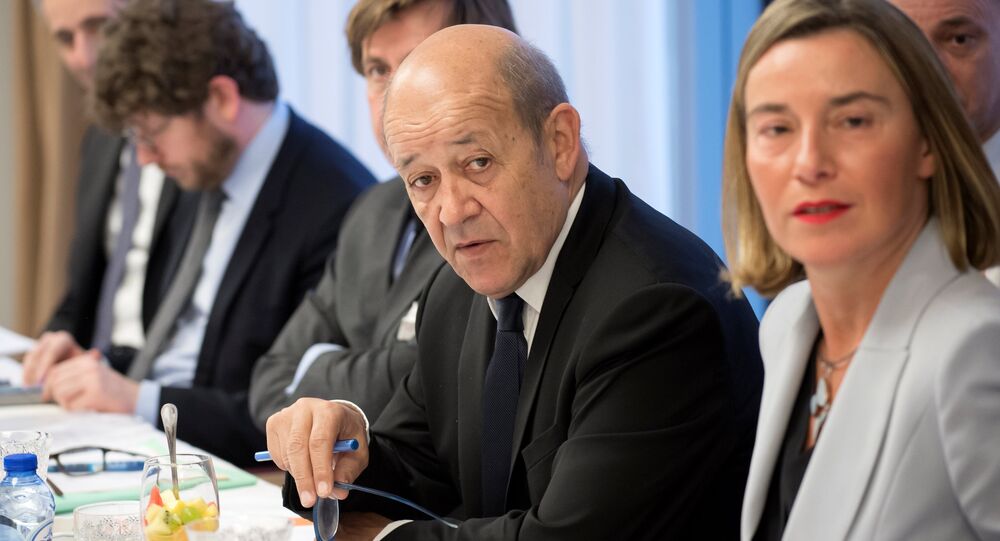 On January 9, the US State Department announced that the US administration was expected to decide on extending the Iran sanctions waiver on Friday.

EU foreign policy chief Federica Mogherini has confirmed that the 2015 Iran deal is delivering its main goal of keeping the nuclear program in check.

“The European Union has expressed very clear position on the nuclear deal, as it was stated by the 28 European Union member states’ ministers already in October last year and repeated again today. The deal is working, it is delivering its main goal which means keeping the Iranian nuclear program in check and under close surveillance,” Mogherini told a press conference after the talks with Iranian Foreign Minister Mohammad Javad Zarif.

The bloc expects all parties to comply with commitments under the agreement, the top EU diplomat added.

She stressed that the International Atomic Energy Agency (IAEA) had confirmed Tehran’s compliance with the deal in nine reports.

“The unity of the international community is essential to preserve the deal that is working, that is making the world safer and that is preventing potential nuclear arms race in the region. We expect all parties to continue to fully implement this agreement.”

However, according to her, the European Union has expressed concern at a meeting with Iranian officials over the Islamic Republic's ballistic missile program and tensions in the region.

Speaking at the press conference following the meeting, French Foreign Minister Jeav-Yves Le Drian stated that there is no reason to cease the implementation of the nuclear deal with Iran as Tehran complies with the agreement.

READ MORE: US ‘Endangering People All Over the World' With Threat to Dump Iran Nuke Deal

“Therefore, it is essential that all parties should continue to abide by the provisions of this agreement, and it is also necessary that our US allies do the same,” Le Drian added.

According to British Foreign Secretary Boris Johnson, no one has so far came up with a good alternative to the 2015 nuclear deal, however, it is up to those who oppose it to propose a better option.

At the same time, German Foreign Minister Sigmar Gabriel said that it is absolutely necessary to have the Iran deal at a time when North Korea is seeking nuclear weapons.

Trump Expected to Extend Sanctions Relief to Iran This Week

On January 9, the US State Department announced that the US administration was expected to decide on extending the Iran sanctions waiver on Friday as Trump now faces a January 13 deadline on recertifying the nuclear deal.

According to AP citing unnamed officials and sources familiar with the matter, US President Donald Trump is expected to extend sanctions relief to Iran as part of the 2015 nuclear deal this week.

At the same time, Reuters reported citing administration sources that while Trump's top advisers are expected recomment him extend Iran's relief from sanctions, it, however, is likely to be accompanied by new sanctions against Tehran.

Speaking at a joint press conference with his Russian counterpart Sergei Lavrov, Iranian Foreign Minister Mohammad Javad Zarif said earlier this week that Tehran regretted that one of the parties to the nuclear deal didn't fulfill its obligations under the agreement but made attempts to hamper its implementation instead.

© AP Photo / Vahid Salemi, File
Iran Ready to Speed Up Uranium Enrichment If US Violates Nuclear Deal - Official
In October 2017, Trump refused to certify that Iran was in compliance with the agreement but stopped short of pulling the United States out of the pact, prompting condemnation from other members of the P5+1 that had brokered the historic deal.

The Iran deal, also known as the JCPOA, that was signed in July 2015 by Tehran and the P5+1 group of nations — the United States, Russia, China, France and the United Kingdom plus Germany, stipulates a gradual lifting of sanctions imposed on the Islamic Republic in exchange for the country maintaining peaceful nature of its nuclear program.