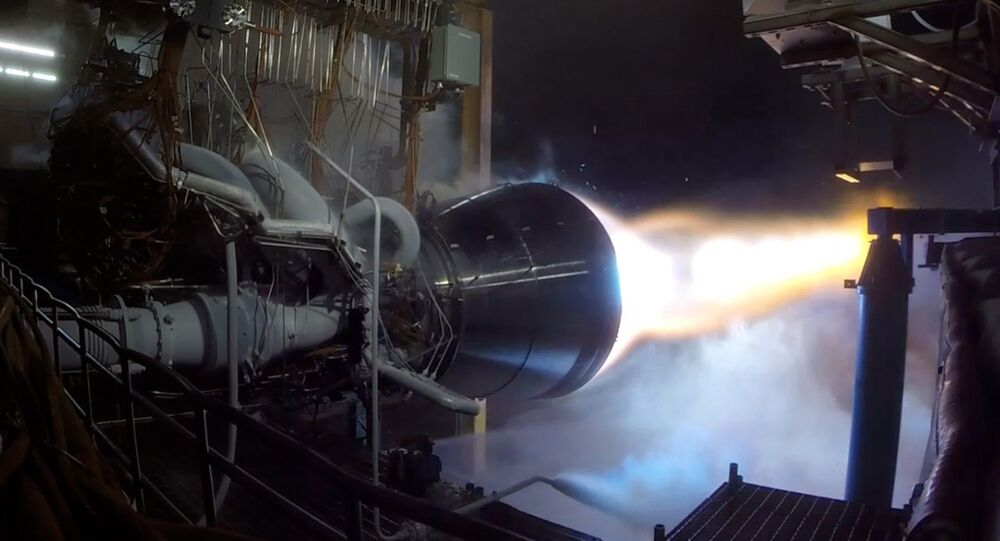 The new engine has been in development for seven years already. The US space program currently relies on the RD-180 engine to propel the Atlas V rocket, the only American vehicle capable of sending heavy payloads into orbit.

During the test, Blue Origin managed to exceed its specific impulse targets (Isp), the company said in a Twitter post. Specific impulse is a measure indicating how effectively a jet engine uses fuel.

The company also said it continues "to exercise the deep throttling of our full scale 550,000 lbf BE-4, the reusability of our hydrostatic pump bearings and our stable start/stop cycles."

Latest BE-4 engine test footage where we exceeded our Isp targets. We continue to exercise the deep throttling of our full scale 550,000 lbf BE-4, the reusability of our hydrostatic pump bearings and our stable start/stop cycles. More to follow from ongoing tests. #BE4 #NewGlenn pic.twitter.com/fw5zvtwpJ6

​The video shows a test of the engine’s ability to throttle. Engine throttling helps manage the acceleration of a rocket. Usually, a rocket goes at full throttle, but throttling capabilities are crucial for a reusable rocket.

Blue Origin has been working on the BE-4 engine for the last seven years. A fully assembled BE-4 engine was unveiled in March 2017.

In October 2016, Blue Origin’s founder Jeff Bezos announced that the company had successfully conducted the first firing test of the new engine.

First hotfire of our BE-4 engine is a success. Huge kudos to the whole @BlueOrigin team for this important step! #GradatimFerociter pic.twitter.com/0gk6k6WuPx

​The BE-4 engine is planned to power the Vulcan rocket which is being built by the United Launch Alliance (ULA). The Vulcan is planned to replace the Atlas V rocket, which relies on the RD-180 engine.

It is also expected that the new engine will be used to propel the New Glenn heavy rocket, which is also being developed by Blue Origin.

The United States has used the reliable and relatively cheap RD-180, designed and manufactured by NPO Energomash, since 2000.

In 2014, US lawmakers imposed limits on future RD-180 purchases, passing a law that required the US to phase out the Russian-made engines in favor of domestically produced next-generation rocket propulsion systems.

However, in December 2015, the US Congress passed a budget that includes a provision allowing the country to continue buying the Russian RD-180 rocket engines. Shortly after, the ULA ordered an additional 20 RD-180 engines at the request of the Pentagon.