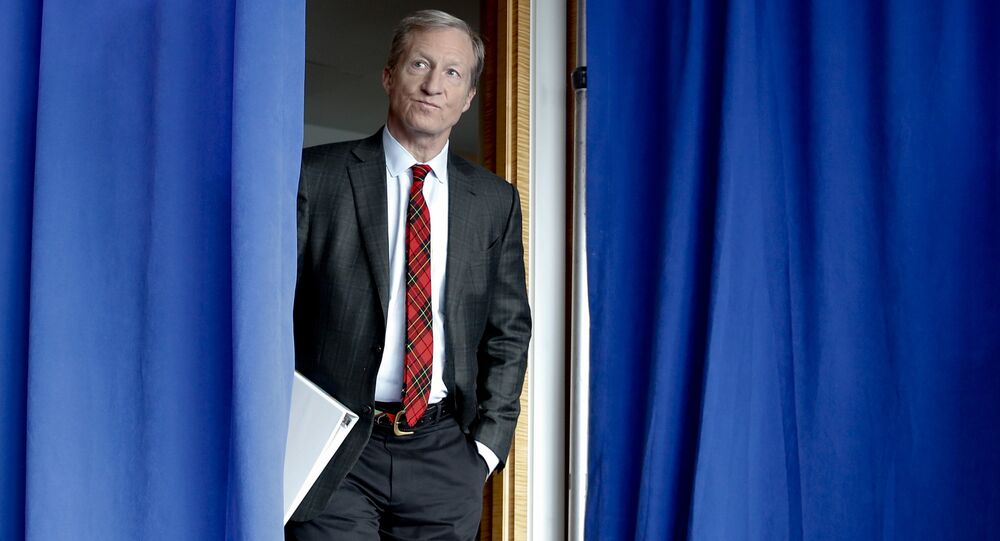 US Billionaire's Campaign Gathers Steam: 'My Job Is to Remove Trump From Office'

Harshly Anti-Republican Tom Steyer says he is ready to invest $30 million into the Democrats' efforts to regain control of Congress.

Hedge fund mogul and Democratic backer Tom Steyer, who has spent staggering sums to reach out to grassroots voters since 2016, when he endorsed Trump’s rival Hillary Clinton in her failed presidential campaign, said on Monday he is trying to mobilize young voters and shift enough seats in the House of Representatives from the GOP to the Democratic Party.

We’re building the largest youth vote effort in American history for 2018—on campus, online, in our communities. Join us → https://t.co/hUOtcSzSB7 pic.twitter.com/4p3aVTR2aS

"My job is to remove Donald Trump from office," he told reporters in Washington on Monday. "2018 is a battle for the soul of (this) country. That's why I'm all in."

The Trump impeachment campaign, first declared in October by Steyer, has now gathered over 4.1 million signatures.

The 60 year-old billionaire  has expressed his willingness to expand his Trump impeachment campaign:

"This tide will wash away the stain of the Trump administration, and it will not recede until America lives up to its founding creed, until we guarantee equal treatment, dignity and respect to every American," he stressed.

Mr. Steyer also announced that he would not run for Senate or governor in California, as had been speculated.

Earlier, Steyer said Trump had brought US nationals "to the brink of nuclear war, obstructed justice at the FBI, and in direct violation of the Constitution, he's taken money from foreign governments and threatened to shut down news organizations that report the truth."

It is incredible to what extent opinions expressed in social media are divided.

Many appear to praise the effort to engage more youth to turn up at the next vote, though no fewer users concede that the move is actually designed to covertly boost Steyer's recognition on the political arena, as he chooses to "buy allies". Some, however, laud the effort pointing to Steyer's words that he himself will not run the Congress election in 2018:

It's crazy how 99% of these zany check mark journalists have the exact same opinion about 80% of the issues. Here's one praising Tom Steyer for trying to buy democrats after he couldn't use his millions to remove a democratically elected president #theflacidresistance https://t.co/2MrPxgnCQQ

Steyer is buying allies to help with his presidential campaign.

His impeachment ads were a name recognition project, featuring his image and mentioning his name, so that the viewers would remember his face and name.

He is like Kipling’s “The Man Who Would Be King.”

Some go still further condemning Steyer as a blatant liar, pointing to the fact that being anti-Trump means being anti-American:

Steyer needs to flip himself over a cliff.

A big percentage of netizens seem to be sincerely happy about the finance-backed possibility to turn the Congress blue:

Tom Steyer will be remembered as an American patriot, as a hero.

I believe 2018 will be a battle for the soul of America, and our mission is clear: we have to take back the House. pic.twitter.com/Nmafp83zAn

Steyer's move came amid the heated multipartisan debate around the recently released tell-all "Fire and Fury: Inside the Trump White House" by Michael Wolff. In his explosive book considered controversial by many, the author has revealed that "one hundred percent" of those around the US president consider him "moron" or "idiot," thus raising the question of Trump's general fitness for the office.

The poll, conducted by the Wall Street Journal and NBC News in mid December, found that a whopping 41 per cent of US citizens support the Congress holding impeachment hearings. The pro-impeachment crowd mostly comprised Democrats, although 7 percent of Republicans also spoke out in favor of removing US President Donald Trump from office.