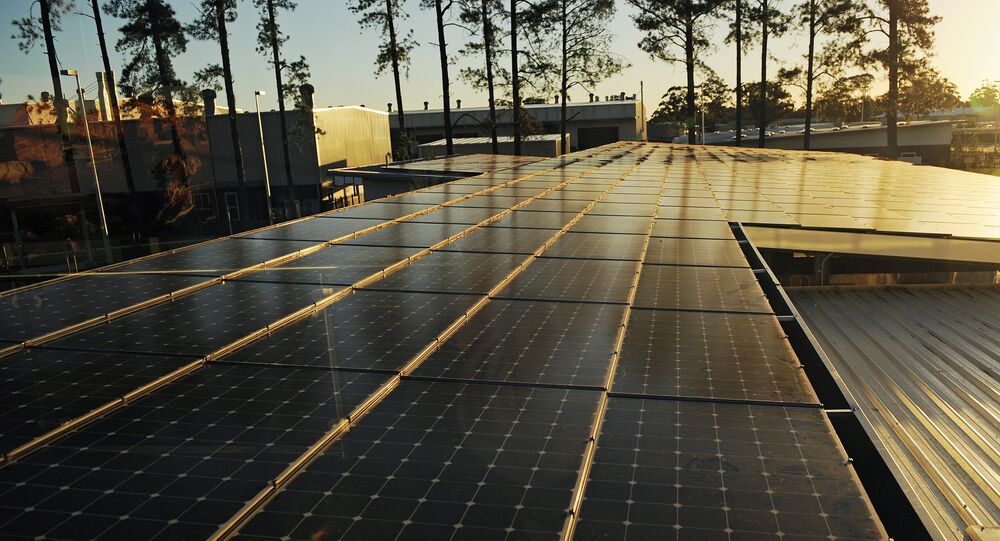 A group of scientists at the US National Renewable Energy Laboratory (NREL) has developed a thermochromic window that is capable of converting sunlight into electricity with high efficiency.

Common solar panels are not transparent like an ordinary window, they are either black and made of silicon, or blue and made of polycrystalline solar cells — silicon melted down and poured into squares.

© CC0
Hydrocarbon-Rich States Step Up Investments in Renewable Energy - IRENA
Instead of traditional solar panel manufacturing materials, scientists combined an experimental material called perskovite with single-walled carbon nanotubes to develop a window that responds to sunlight, transforming it from transparent to tinted to minimize unwanted heat exchange inside the room. As the window darkens, it generates electricity.

According to NREL, the color change is caused by molecules of methylamine. When the device is exposed to sunlight, the molecules are driven out, transforming from transparent to tinted to generate electricity (with less than 3 percent visible transmittance). When the sun is not shining, the device is cooled and molecules are reversibly absorbed into the window, turning it transparent (with 68% percent visible transmittance).

architectmag: This Week in Tech: A Two-In-One Window and Solar Panel.
Plus, Tesla installs the world's largest energy storage facility in under 100 days, autodesk to cut nearly 1,200 jobs, and more design-tech news from this week. … pic.twitter.com/FgjqJKIOA5

© CC0 / Pixabay
Renewable Energy Industry Hotting Up as World Goes Cold on Nuclear Power
But it must be noted that the problem of consistency remains. After 20 transparent-tinted test cycles the device began to decline in performance, and scientists must now work to improve stability and longevity.

According to Wheeler, the new technology, once perfected, will be integrated into vehicles, and dwellings, to power all manner of devices and machines.