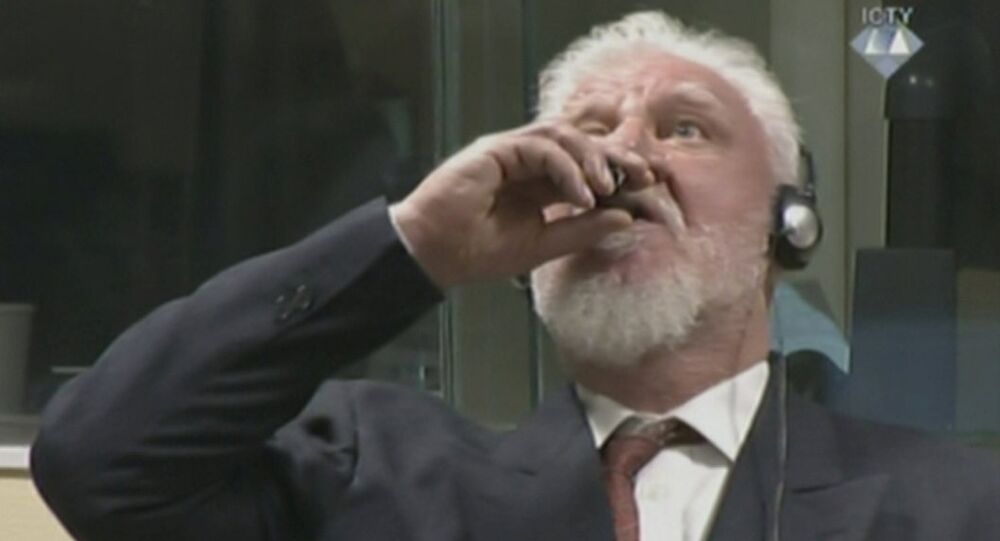 The shocking moment happened as the court hearing on war crimes committed during the Bosnian war of 1992-1995 was coming to a close.

72-year-old former Bosnian Croat military leader Slobodan Praljak has died in a hospital in The Hague, just hours after drinking what is alleged to be poison from a small bottle while still in the courtroom, Spokesman for the UN court Nenad Golcevski confirmed, though without specifying the nature of the liquid the suspect drank.

Croatian Prime Minister Andrej Plenkovic has extended condolences to the Praljak's family, adding that "we have all unfortunately witnessed his act by which he took his own life."

Dramatic Scenes in the Courtroom

As a judge announced Praljak's 20-year jail sentence during an appeal hearing in the International Criminal Tribunal for the former Yugoslavia (ICTY), the suspect stated, "I am not a war criminal, I oppose this conviction" and gulped down the deadly liquid from a concealed flask.

The hearing was immediately suspended after the incident and the judge called for an ambulance.

Praljak was whisked out of the courtroom, with the security service giving the order that "nobody touches the bottle."

The courtroom where Praljak swallowed the poison has been declared a "crime scene," with police conducting an investigation into the incident, according to a UN judge.

Before the Court Hearing

Croatian lawyer Goran Mikulicic told the network Tportal, that Praljak could easily take a flask of poisonous liquid with him into the courtroom, as the checking procedures are not rigorous.

© AP Photo / Peter Dejong, Pool
Lawyer: Ratko Mladic Trial All About NATO Securing Its ‘Encirclement of Russia'
In answer to the question, who could have passed the poison to Praljak while he was in a prison cell, Mikulici said that that visits from relatives, friends, lawyers and journalists are allowed, though only defendants are allowed to bring a bag to the visiting area.

However, anyone could have smuggled in a small bottle containing poison, as the x-ray machines in the court are unable to detect poison, according to Mikulicic.

Praljak is one of six former Bosnian Croat wartime commanders convicted of murdering Muslims during Bosnia's war who were due to hear their verdicts today.

© REUTERS / Peter Dejong/Pool
Ex-Bosnian Serb Leader Mladic to Appeal UN Court's Ruling – Son
Previously, the International Criminal Tribunal for the Former Yugoslavia found former leader of the Bosnian Serbs and military commander Ratko Mladic guilty of the involvement in the Srebrenica massacre and of committing crimes against humanity, sentencing him to life in prison.

Wednesday's hearing was the last judgment by the UN war crimes tribunal before it closes next month.