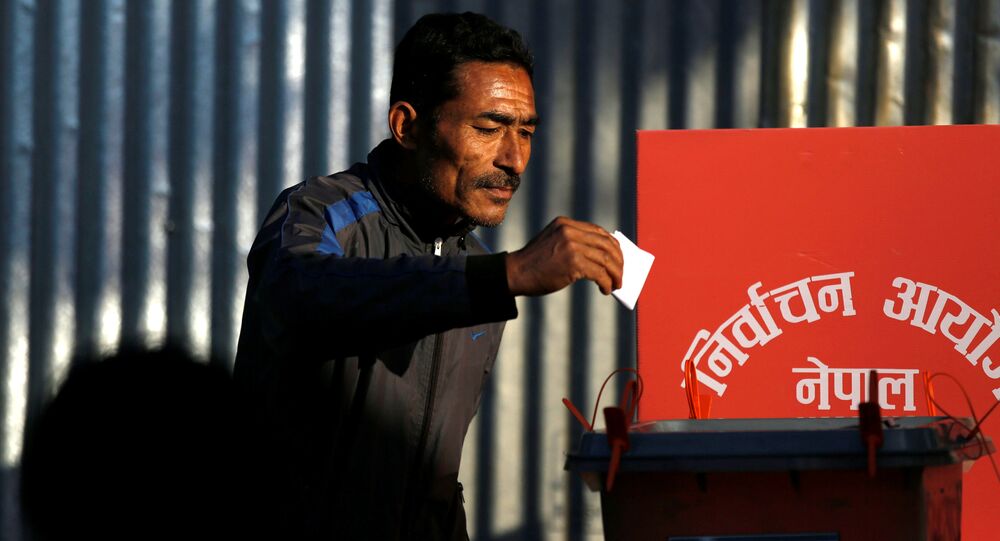 Nepalis began voting for a new parliament on Sunday as the media shared reports regarding a series of blasts allegedly performed by Maoist insurgents in the run up to the polls.

It is the first parliamentary election in post-war republican Nepal, after 2006 marked the end of a civil war between Maoists and security forces, as the parliament stripped the Nepali king of immunity and the right to a veto as well as obliged him to pay taxes. After two years, the specially set-up assembly voted to crush the 239-year-old monarchy, formerly believed to be "Vishnu’s embodiment on Earth" and turned Nepal into a secular federal republic.

Though over a decade has passed since then, sporadic violence is still reported around the country. Many are pinning their hopes on this year’s parliamentary vote to put an end to the ongoing hostilities and lead it to a better-balanced society.

© REUTERS / Navesh Chitrakar
Officers from election commission works to set up a polling station during the parliamentary and provincial elections at Chautara in Sindhupalchok District November 26, 2017
The polls are expected to implement the new post-war constitution, passed in 2015, which aims at supporting marginalized communities, namely women and Dalits — the lowest caste — by raising their representation in state institutions. The new charter also lays out a total overhaul of the division of power between the central government and the seven Nepali provinces.

An alliance of the Unified Marxist-Leninists (UML) with the Maoists is the closest rival to the ruling Nepali Congress in the vote, in which around 3.2 million people across the north of the country are expected to participate, including the areas devastated by a severe earthquake in 2015.

"We need roads, water supply, electricity, health care and jobs so our children are not forced to go abroad to work," 49-year-old Rita Shrestha from the tremor-hit area told Reuters after putting her ballot  in the box.

© REUTERS / Navesh Chitrakar
Officers from election commission seal a ballot box during the parliamentary and provincial elections at Chautara in Sindhupalchok District November 26, 2017

The more populous southern parts of Nepal will cast their votes on December 7.

Nepal has a two-chamber parliament, with 275 seats in the House of Representatives up for election. The latter will appoint Nepal’s Prime Minister in the foreseeable future.