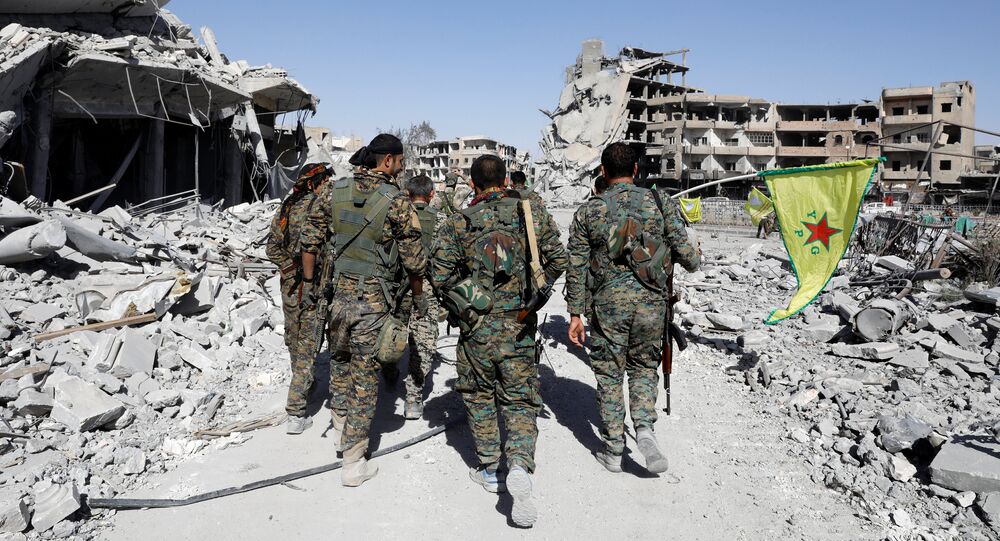 In an interview to Radio Sputnik, Tim Anderson, an academic expert in economics and international politics from the University of Sydney, pondered on the US’ role in the standoff in Syria, saying that America misinterprets the Russian arms’ presence in the country.

Tim Anderson: In the beginning [the goal of the US] was to weaken or to destroy Syria as part of the regional plan to destroy all the independent countries in the region. There were very many fabulous stories about why they were there. The first one was that they were performing a humanitarian intervention; then there was a pretext of protective intervention. But this is very common for the US: it has always looked for new pretexts and accepted that it has to abide by international law.

Sputnik: What do you think about the US plans to establish local governance, which is separate from Assad’s government in SDF-held areas. Are there a lot of those areas?

Tim Anderson: Any attempt to set up some sort of alternative governance is precisely about destroying the territorial integrity and the sovereignty of that nation. The US has been involved in these maneuvers, which have always been illegal.

Sputnik: Is this not a declaration of war on some level?

Tim Anderson: In some ways it is. The US has tried to make a moral equivalence out of the presence of Iranian and Russian forces in Syria ignoring the fact that they were invited forces to defend the country. The US doesn’t seem to understand, or doesn’t want to understand that there is that difference.

Sputnik: Is there a possibility that this counter-Daesh campaign could result in something bigger, geared more to the East, for example?

Tim Anderson: The creation of Daesh in Iraq, that was precisely to weaken Baghdad and to prevent the government from getting closer to Iran. That’s where Daesh came from. Daesh had that intention, with the Saudi creation backed by the US precisely to weaken Iraq and then later on Syria. That’s the idea of trying to prevent the extension of Iranian influence in the region. That has always been on the forefront of the US strategies’ mind. A lot of military interventions in the Middle East have been in fear of Israel’s influence on Iran, and Israel expresses that quite clearly. And the Saudis express that, and Washington expresses it. If the US adventures the wars in the Middle East, destabilizing wars and interventions … they had the idea that if the US withdraws, there’s going to be a strong alliance created between Iran, Iraq, Syria, Lebanon and Palestine. And that’s what Israel fears, what Washington fears. So Iran is at large a state which has the capacity to lead any independent coalition there. I think, that’s always at the back of the mind of Washington.

Sputnik: How’s Israel tied to all of this?

Tim Anderson: Israel, of course, would like to terminate the destabilizing factor in the region. It’s had many incursions into Palestine, taking over land, and Lebanon. It’s an agency which is resented and resisted by many of the Aryan Muslim states in the region. And Iran is the most powerful of all. Israel recognizes it, likewise the Saudis and Washington. That’s why there is so much obsession about the future role of Iran in the region.

Sputnik: Why is Israel not afraid of Saudi Arabia as badly as they’re afraid of Iran?

Tim Anderson: Saudi Arabia gave lip service to supporting the Palestinians in the past as all the Arab states had to. But in recent times we’ve seen quite a close alliance building between Israel and Saudi Arabia, not precisely because they both fear the influence of Iran in the region.

Sputnik: Do you think there’s going to be some sort of compromise in terms of the leadership in the country after the war comes to an end?

Tim Anderson: There’ve always been talks in the Syrian administration over what they expectedly have been running for the last five years, which is a government of national unity, which will include various elements of the opposition. Remember, most of the opposition in Syria sided with the state and the army, if not with the government back in 2011. There was more of a civil opposition within Syria. Inclusion of some of the external forces is always a possibility, the possibility of having early parliamentary elections, or an early referendum on changes to the Constitution. They are not going to do that by simply overthrowing President Assad. There’s too much of a strong support within the country for the president, the army. The Syrian state hasn’t been crushed the way the Iraqi state was, so no outside forces could simply come along and impose a new constitution on Syria. Having said that there is still room for some negotiation in terms of changes some Syrian parties would want to see in a new constitution.