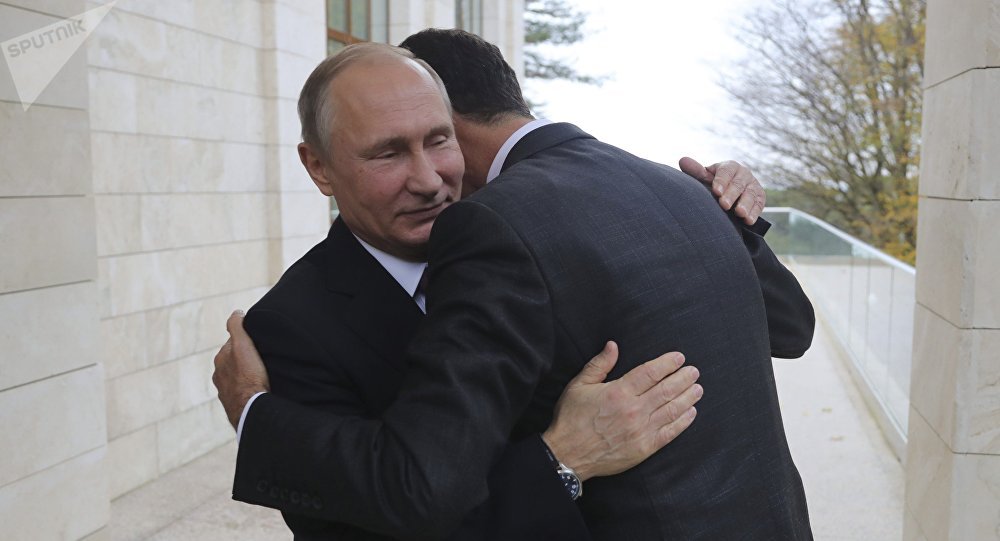 Russian President Vladimir Putin met with Syrian President Bashar Assad, who flew to Russain city of Sochi for a working visit. The two leaders discussed the situation in Syria.

Vladimir Putin congratulated Bashar Assad for his success in fighting Islamist militants, saying "Syria is striving in the fight against terrorist groups," adding "the Syrian people are going through very difficult trials and are gradually approaching the final, unavoidable rout of terrorists."

"You know, we are actively working with other countries as well, with Iraq, the United States, Egypt, Saudi Arabia, Jordan. And we are in constant contact with this partners," Putin said at a meeting with Syrian President Bashar Assad.

Putin expressed hope that the fight against terrorism in Syria will conclude in the very near future.

"Thanks to the Astana process we managed to create de-escalation zones, which served to start a real and deep dialogue with the opposition, pretty much for the first time," Putin stressed.

"Vladimir Putin also introduced Bashar Assad to the leadership of the Defense Ministry and the General Staff of the Russian Armed Forces, who were present in Sochi for the next round of meetings on the issues of military construction and the State Armaments Program," as quoted in Tuesday's statement of the Kremlin press service.

Bashar Assad said at a meeting with Russian President Vladimir Putin that the aerial support provided by the Russian Aerospace Forces had been key to resolving the conflict in Syria through diplomacy: "I am very pleased to meet with you two years and a few weeks after Russia launched the operation, which is very successful… It must be admitted that this operation allowed us to advance the political settlement in Syria.”

Syria's President added that Damascus is ready to hold a dialogue with all who are interested in a political settlement in Syria.

Also, Bashar Assad stated that he relies on Russia's support in ensuring that external players don't interfere in the political process in Syria.

"Over this period, great success has been achieved, both directly on the battlefield and in political terms. Many areas of Syria have been liberated from terrorists, and Syrians who were forced to leave them earlier could return to these areas," Assad added.

The meeting between Russian and Syrian leaders took place on Monday in the Russian resort city of Sochi.

The presidents of Russia, Iran and Turkey will meet on November 22 at the trilateral summit in Sochi, where they will discuss "the entire Syrian agenda,” according to Kremlin spokesman Dmitry Peskov.

Almost 50 Russians Rescued in Syria to Be Evacuated to Russia