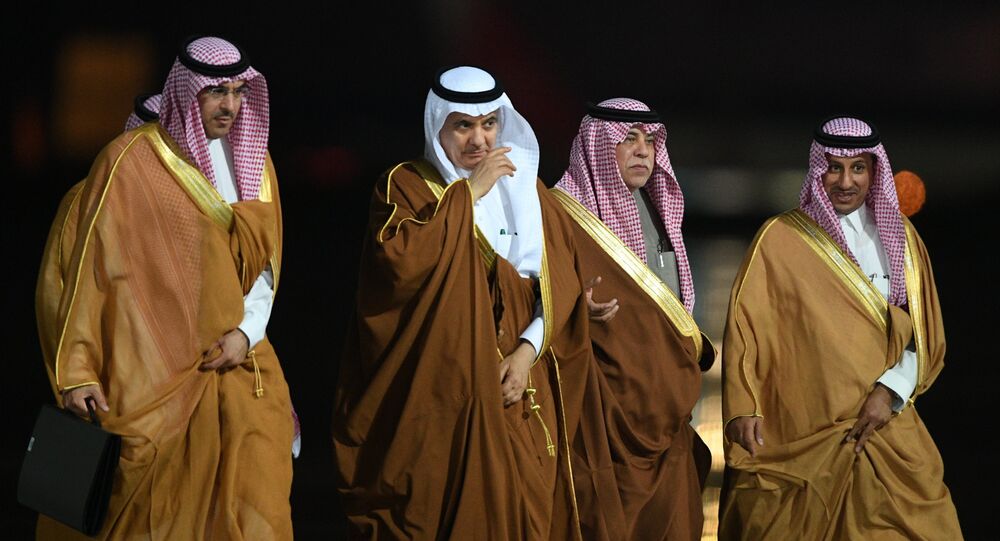 This article revealed the history and the current state of bilateral relations between Saudi Arabia and Russia following Saudi King's arrival in Moscow on Thursday.

Moscow (Sputnik) — Saudi King Salman bin Abdulaziz Al Saud arrived in Moscow on Thursday for the first ever visit of a reigning Saudi monarch to Russia.

© Sputnik / Aleksey Nikolskyi
Putin: Saudi King’s Visit to Russia a Landmark Event
The Soviet Union was the first country to recognize the independent Saudi state, the Kingdom of the Hejaz and Nejd and its Dependencies, which was renamed into the Kingdom of Saudi Arabia (KSA) in 1932.

In 1990, the two countries agreed on resumption of diplomatic relations and on re-opening of diplomatic missions. The Russian Embassy in Riyadh has been active since May 1991, and the Consulate General in Jeddah has been working since April 1991. The Saudi Embassy opened in Moscow in December 1991.

On December 30, 1991, Saudi Arabia recognized the Russian Federation as successor to the Soviet Union.

The Russian-Saudi relations intensified in the early 2000s.

In September 2003, Crown Prince Abdullah bin Abdulaziz Al Saud, who was the king of Saudi Arabia in 2005-2015, visited Moscow.

President Vladimir Putin’s state visit to Riyadh in February 2007, the first visit by a Russian head of state to the Arabian Peninsula in history, gave a strong impetus to further development and strengthening of the Russia-Saudi relations.

The visit resulted in the signing of a number of documents, including the inter-governmental agreement on air transportation, the Convention for the Avoidance of Double Taxation, the Memorandum on Cooperation between the Russian Federal Agency for Culture and Cinematography and the KSA Ministry of Culture and Information, an agreement on cooperation between the RIA Novosti Russian Information Agency and the Saudi Press Agency.

© AP Photo / Michael Sohn
Saudi Arabia Planning to Invest in Dozens of Russian Projects
On November 21-23, 2007, Crown Prince, Deputy Prime Minister, Minister of Defence and Aviation and Inspector General Sultan bin Abdulaziz Al Saud visited Russia at the invitation of president Putin. During the visit, the crown prince met with Putin, members of the Russian government and other officials.

An increase in the political dialogue with the Saudi leadership has been experienced in recent years.

Secretary General of the National Security Council Bandar bin Sultan has visited Moscow several times. He paid two visits to Russia in 2013 (July-August and December). During his meetings with President Vladimir Putin, a wide range of bilateral issues, the situation in the Middle East and North Africa were discussed.

President Putin received the crown prince’s successor, Mohammad bin Salman, several times: in June 2015 on the sidelines of the 19th St. Petersburg Economic Forum, in October 2015 in Sochi, and in May 2017 in Moscow.

On September 4, 2016, President Vladimir Putin and Crown Prince Mohammad bin Salman met on the sidelines of the G20 summit in China’s Hangzhou.

The leaders of the two countries speak by phone on a regular basis to discuss key aspects of bilateral relations and items on the regional agenda. They have had nine telephone conversations since April 2015, with the most recent one taking place on June 13, 2017.

The two countries also maintain parliamentary contacts. On February 24-27, 2014, the Russian delegation headed by Deputy Chairperson of the Federation Council Ilyas Umakhanov was in the Saudi Arabia to participate in the 3rd G20 Parliamentary Speakers’ Consultation in Riyadh. The delegation also met with the kingdom’s leadership, leaders of the Organization of Islamic Cooperation and management of the Islamic Development Bank in Jeddah.

On February 24-26, 2016, a delegation of the Foreign Affairs Committee of the Saudi Arabian Consultative Assembly, headed by Nasser bin Abdulaziz Dawood, visited Moscow.

On April 15-17, 2017, Russian Federation Council Chairwoman Valentina Matviyenko visited Saudi Arabia to meet with the country’s leadership and members of the Consultative Assembly.

Contacts between Russian regions and Saudi Arabia also take place. The kingdom has been visited by President of Tatarstan Rustam Minnikhanov (most recently, in February 2017), Head of Chechnya Ramzan Kadyrov and Head of Bashkortostan Rustem Khamitov. In November 2016, Head of Ingushetia Yunus-bek Yevkurov paid a visit to Saudi Arabia. During these visits, the heads of the republics met with the king and other members of the Saudi leadership.

© Sputnik / Mikhail Klementiev
King of Saudi Arabia May Visit Moscow in October
According to the Russian Federal Customs Service, foreign trade between Russia and Saudi Arabia totaled $491.7 million, including Russian exports of $350.9 million and Russian imports of $140.8 million.

The most rapidly developing areas in the two countries’ trade and economic cooperation are investment, oil and gas and agriculture.

Russia’s LUKoil and Stroytransgaz operate in the Saudi market.

In 2004, LUKoil signed a contract for exploration and development of Saudi hydrocarbon deposits for a 40-year term, and established Luksar, a joint venture with Saudi Arabia Energy Ltd. Stroytransgaz started a consortium with the Saudi Oger construction company and participates in the construction of a water transport system in the southwestern provinces of the kingdom.

© REUTERS / Faisal Al Nasser
Driving Licenses for Women in Saudi Arabia to 'Boost Economy'
In October 2002, the Russia Saudi Joint Intergovernmental Commission Trade, Economic, Scientific and Technology Cooperation was created. The commission has come together four times, including a meeting in Moscow on November 24-26, 2015, that served as the basis for a Russian-Saudi investment forum. The fifth session is scheduled to take place October and November 2017 in Riyadh.

The Russian-Saudi Business Council has been established in the Russian Chamber of Commerce and Industry to assist the implementation of projects within interstate cooperation in trade and economy.

Russia and Saudi Arabia have strong cultural links, including between Muslim organizations. In 2002, Russia established its hajj mission (represents the Council for Hajj at the Government Commission for Issues of Religious Organizations) to provide assistance to Russian pilgrims.

In 2016, according to Saudi Ambassador to Russia Abdulrahman bin Ibrahim Al Rassi, 16,000 Russian Muslims visited Mecca, which is 15 percent more than in 2015. This figure does not include the thousands of pilgrims that arrive from Russian regions for Umrah, or the ‘minor pilgrimage.’

Under the memorandum of understanding signed in September 2003, the Russian Academy of Sciences established direct links with King Abdulaziz University, the largest science and technology center in Saudi Arabia.

Saudi King Arrives in Moscow for First Ever Visit (VIDEO)