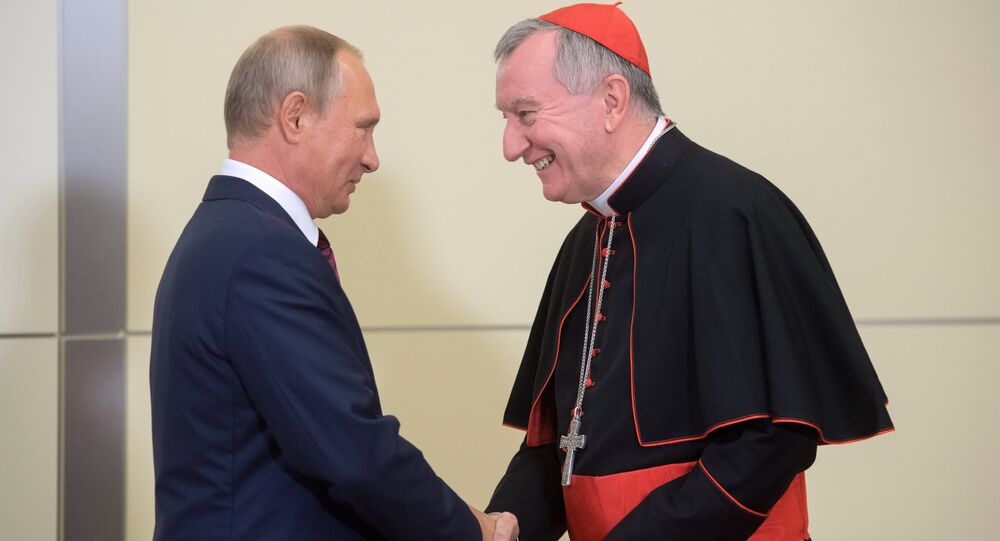 Vatican Satisfied With Progress in Bilateral Relations With Russia

Vatican Secretary of State Cardinal Pietro Parolin stated that Russia and the Vatican signed an agreement on a visa-free system for diplomats from both states.

BOCHAROV RUCHEY (Russia) (Sputnik) — The relations between Russia, the Russian Orthodox Church and the Vatican are passing through an important phase, Vatican Secretary of State Cardinal Pietro Parolin said at his meeting with Russian President Vladimir Putin Wednesday, adding that the Vatican was content with the progress being made in bilateral ties.

© AP Photo / L'Osservatore Romano
What is Behind Relations Between Russia, Vatican
Parolin recalled that Russia and the Vatican had signed an agreement on a visa-free system for diplomats from both states on Tuesday. He also pointed toward the fact that relations between the Holy See and Russian Orthodox Church have been progressing with a new dynamic over the past several years.

"I hope that all the parties involved will continue to work in the same spirit in order to expand our cooperation," the Vatican Secretary of State indicated.

The Vatican Secretary of State is currently on a four-day visit to Russia. He has already met with Russian Foreign Minister Sergey Lavrov, during which Parolin noted that Russian-Vatican relations were at a "very high, positive level." Lavrov, in turn, stressed the sides’ common vision on the settlement of international crises and fight against terrorism.