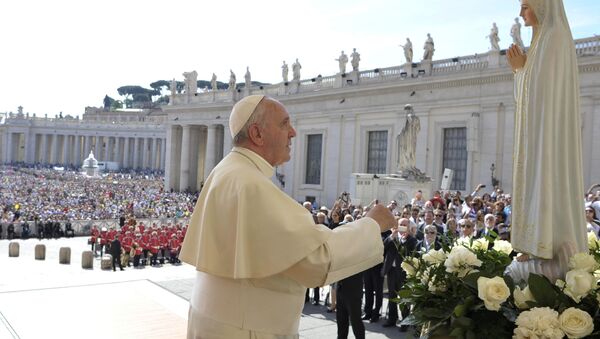 MOSCOW (Sputnik) — Parolin is expected to meet with Russian President Vladimir Putin, Foreign Minister Sergey Lavrov, as well as other state officials and representatives of the Russian Orthodox Church.

Below is the history of relations between Russia and the Vatican.

Russia and the Vatican established their first state-level contacts in the late 15th century. The first Russian mission to the Vatican was accredited in 1817.

For several decades, the Soviet Union remained one of the most closed countries to the Vatican. The warmest period in the bilateral inter-state relations was under Pope Paul VI (1963-1978). On January 30, 1967, Nikolai Podgorny, the chairman of the Presidium of the USSR Supreme Soviet, paid the first official visit to the Vatican.

Soviet Foreign Minister Andrei Gromyko had two brief meetings with the holy pontiffs. The first such meeting took place on October 4, 1965 in New York, where Pope Paul VI greeted delegates of the UN General Assembly. The Pope received Gromyko four times. The first unofficial meeting was held on April 27, 1966, followed by meetings on November 12, 1970, February 21, 1974 and June 28, 1975. Pope John Paul II met with Gromyko twice: on January 24, 1979 and February 27, 1985. After each meeting, the Soviet Government slightly mitigated its policies with regard to religion in general and the Roman Catholic Church in particular. On December 1, 1989, Mikhail Gorbachev, chairman of the Presidium of the USSR Supreme Soviet, paid an official visit to Pope John Paul II. On November 18, 1990, Gorbachev was received at the Vatican once again.

The Soviet Union and the Vatican established official relations on March 15, 1990. After the breakup of the USSR, the Vatican recognized the Russian Federation’s independence and sovereignty on September 5, 1991.

On December 3, 2009, then-Russian President Dmitry Medvedev paid a working visit to the Vatican and was received there by Pope Benedict XVI. During their meeting, both sides voiced their intention to raise the level of relations between Russia and the Holy See.

On December 9, 2009, Russia and the Holy See exchanged notes on establishing bilateral diplomatic relations at the level of the Russian Embassy in the Vatican and the Apostolic Nunciature, the Vatican’s top-level diplomatic mission in Russia.

On February 17, 2011, then-Russian President Dmitry Medvedev paid the first official visit to the Vatican after the establishment of full-fledged diplomatic relations. Medvedev and Pope Benedict XVI focused on the prospects of humanitarian, cultural and social cooperation, as well as in science, education and culture. They also discussed broadening of the interfaith dialogue. After being received by the Holy Pontiff, Medvedev had a brief meeting with Cardinal Tarcisio Pietro Evasio Bertone, the Cardinal Secretary of State.

On November 25, 2013, President Putin met face to face with Pope Francis for 35 minutes in the Vatican. He presented the Holy Pontiff with the Icon of Vladimir Mother of God. In response, Pope Francis presented the Russian leader with a majolica depicting the Gardens of the Vatican. While saying goodbye, he asked the president to convey his best wishes to Patriarch Kirill of Moscow and All Russia.

On June 10, 2015, Putin visited the Vatican once again and met with Pope Francis. During their conversation, which lasted more than an hour, they discussed the current situation on the international agenda, including the crisis in Ukraine.

On December 17, 2016, Putin had a telephone conversation with Pope Francis and wished him a happy 80th birthday.

The heads of foreign ministries of the two states met in the Vatican in 2004, 2005 and 2007. In March 2009, Cardinal Dominique Mamberti, the secretary for Relations with States within the Holy See's Secretariat of State, visited Moscow and met with Lavrov.

On November 3, 2015, Belgrade hosted a meeting between Lavrov and Paul Richard Gallagher, the secretary for Relations with States within the Holy See's Secretariat of State, on the sidelines of the OSCE Ministerial Meeting.

On December 2, 2016, Lavrov visited the Vatican and met with Parolin and Gallagher.

Russia and the Vatican cooperate within the United Nations and other international organizations, including the OSCE and the Council of Europe.

Russia and the Vatican continue to expand their cultural contacts. From April 14 through June 11, 2011, the Raphael Hall at the Vatican Museums hosted the exhibition "Faberge: Holy Images" sponsored by the Link of Times cultural and historical foundation and featuring 140 exhibits owned by the Russian Royal Family and representatives of the Russian and European aristocracy.

The Vatican Museums provided Caravaggio’s masterpiece, "The Entombment of Christ," for the exhibition "Caravaggio (1571-1610): Paintings from the Collections of Italy and the Vatican" at the Pushkin State Museum of Fine Arts. From October 2013 through January 2014, the Vatican Museums hosted an exhibition called "Precious antiquities: The Profane Museum at the time of Pius VI" with the support of Russia’s State Hermitage.

In addition to interstate cooperation between Russia and the Vatican, the Russian Orthodox Church and the Roman Catholic Church are actively expanding their dialogue.

On February 12, 2016, a meeting between Patriarch Kirill of Moscow and All Russia and Pope Francis made history in Havana. The meeting marked the first encounter in history between a Roman Catholic pope and a Russian Orthodox patriarch in the nearly 1,000 years since Eastern Orthodoxy split with Rome.