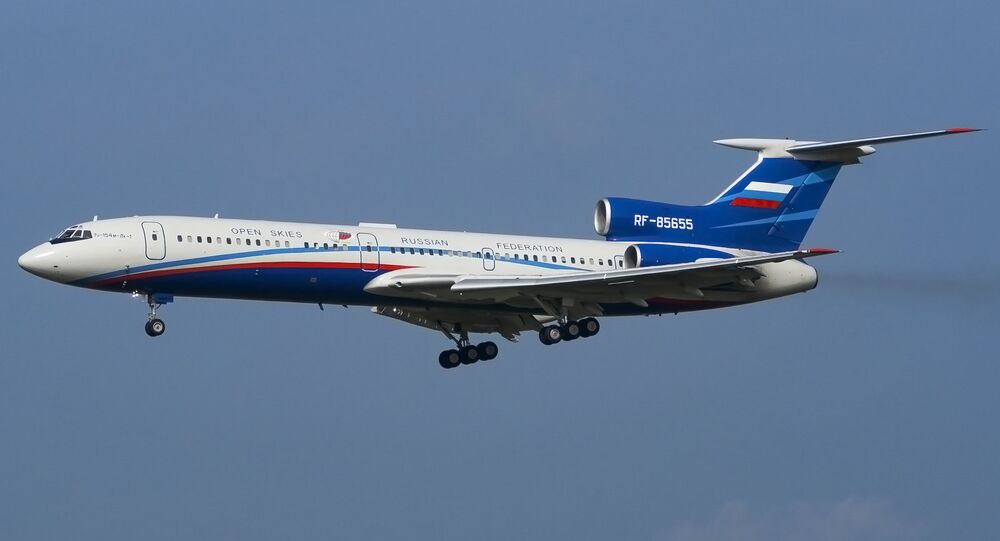 Russian Military Jet Flies Over US White House: Why It is 'Routine Business'

On Wednesday, a Russian Aerospace Forces Tu-154M reconnaissance jet flew over the US Capitol, the Pentagon, CIA, Joint Base Andrews, the base of Air Force One and some other strategic objects. Russian political analysts explained to Sputnik why such a flight is nothing unusual and where the US jets prefer to go when they fly over Russian territory.

The US media was quick to report that a Russian Tu-154M had flown over "what is normally some of the most secure airspace in the nation": the Pentagon, US Capitol, National Mall and the White House.

© Flickr / Alan Wilson
Russian Surveillance Plane Flies Over Washington - US Media Reports
It also flew over the Central Intelligence Agency in Langley, Virginia, as well as Camp David and Joint Base Andrews, both in Maryland.

CNN was the first to report that the Russian flights were conducted under an agreement known as the Open Skies Treaty.

The treaty, which has been signed by 34 countries, including the United States and Russia, allows for unarmed aerial surveillance flights over the entire territory of a participating country's territory.

Sputnik Radio discussed the issue with political analyst Yuri Svetov, who confirmed that such flights are nothing unusual under the above agreement.

The Russian flights in the United States are coordinated with the Federal Aviation Administration and carry US Air Force personnel who serve as escorts.

© CC BY-SA 2.0 / Dmitry Terekhov / Tupolev Tu-154M-Lk-1 RF-85655
Military Plane's Observation Flyover of US Posed No Danger – Russian Legislator
To some extent, he said, such flights have become a routine business, which is not always reported by mass media.

The political analyst, however, suggested that given the current tensions in the internal affairs of the US, some opponents of President Trump might speculate on the situation, claiming that the Trump administration might have granted certain preferences to Russia, which are not given to American pilots when they conduct similar flights in Russia.

Vladimir Dzhabarov, first deputy chairman of the Federation Council's defense and security committee, explained to Sputnik that the purpose of such flights is "to see how various arms control agreements are being implemented, and exercise control over military activities."

The flight did not pose any danger, he said, since there are no weapons on board such aircraft.

Meanwhile Viktor Murakhovsky, a Russian military analyst and editor-in-chief of the magazine "Arsenal of the Fatherland," told Sputnik where the US jets prefer to go when they fly over Russian territory.

He said that they have not flown over Russia's governmental infrastructure for a long time, as they are more interested in Russia's Kaliningrad region and the territories bordering Ukraine.

"The treaty, which is being monitored by the OSCE  (Organization for Security and Cooperation in Europe), sets up a definite number of flights to be conducted over each particular territory and even technical parameters of the equipment which is used on board. In other words, there are absolutely no secrets from either of the participating countries," he concluded.