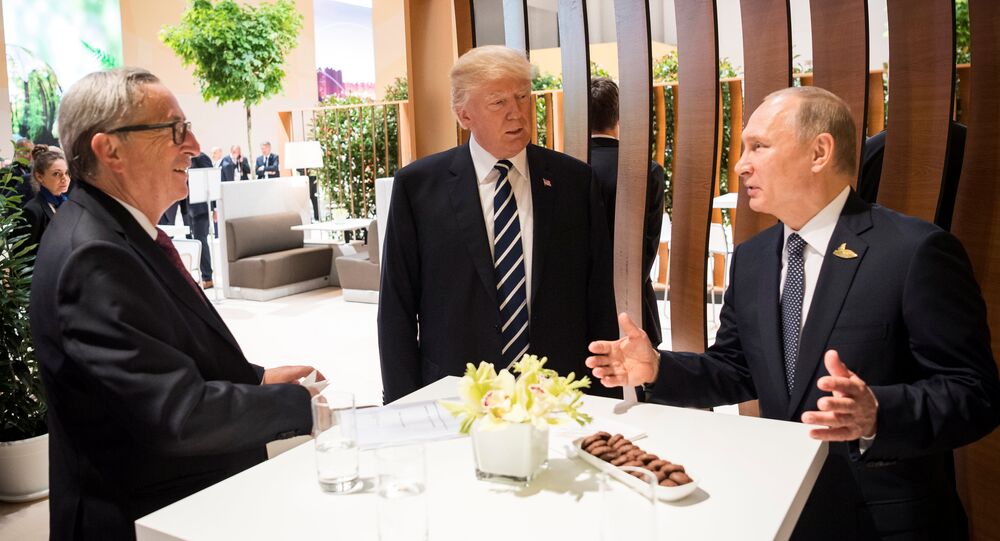 The first meeting between Vladimir Putin and Donald Trump at the G20 summit in Hamburg evoked a wave of criticism from Western media, as a number of notable news outlets blasted the US President for his conduct during negotiations.

© Sputnik / Michael Klimentyev
Advisers Avoid Saying If Trump Agreed With Putin Russia Did Not Meddle in US Election
At least several prominent newspapers took a dim view of President Trump’s handling of this meeting, claiming that the Russian leader apparently managed to outplay and outsmart his US counterpart.

For example, Die Welt stated that it was clear to all professional observers that the meeting resulted in Trump’s capitulation.

In an apparent effort to underscore Trump’s relative inexperience in foreign affairs, the newspaper claims that the "political pro" Putin knocked out the newbie US President "by the book."

The article’s author also emphasized the fact that Putin paused for a moment before shaking Trump’s already extended hand.

The Guardian adds that while US politicians apparently felt relieved that Trump managed to avoid "a major gaffe" during the meeting, it was "hardly cause for celebration."

"It’s an indication of how rapidly our standards are falling when we’re reasonably pleased that President Trump has not made an obvious error," Thomas Countryman, former US acting undersecretary for arms control and international security, remarked.

© AFP 2021 / SAUL LOEB
US President Donald Trump (L) and Russia's President Vladimir Putin shaking hands during a meeting on the sidelines of the G20 Summit in Hamburg, Germany, on July 7, 2017

Meanwhile the New York Times insists that the meeting with Putin was probably the best part of the summit for Trump, who apparently found himself increasingly ostracized by other delegates.

"The talks with Mr. Putin oddly turned into a bright spot for Mr. Trump on the first full day of the gathering, where the United States found itself increasingly ostracized by other Group of 20 members on major issues, including climate change, immigration and trade," the newspaper says.

The Los Angeles Times criticized the way Trump discussed the issue of Russia’s alleged meddling in the 2016 US presidential election, arguing that the US President should’ve been more assertive in his inquiries on the subject.

The news website Vox even took this issue up a notch by outright saying that "Putin got Trump to buy his fake news on election interference and to offer a weak endorsement of upcoming sanctions."

Interestingly enough, the article’s author insisted that "the entire US intelligence community believes the Kremlin mounted a sophisticated campaign" to help Trump win the election, even though this assessment was made only by four out of 17 US intelligence agencies.

Stating that the US leader did not even properly prepare for the meeting, unlike his Russian counterpart, Vox claimed that "Trump — the dealmaker — got outplayed by Putin."