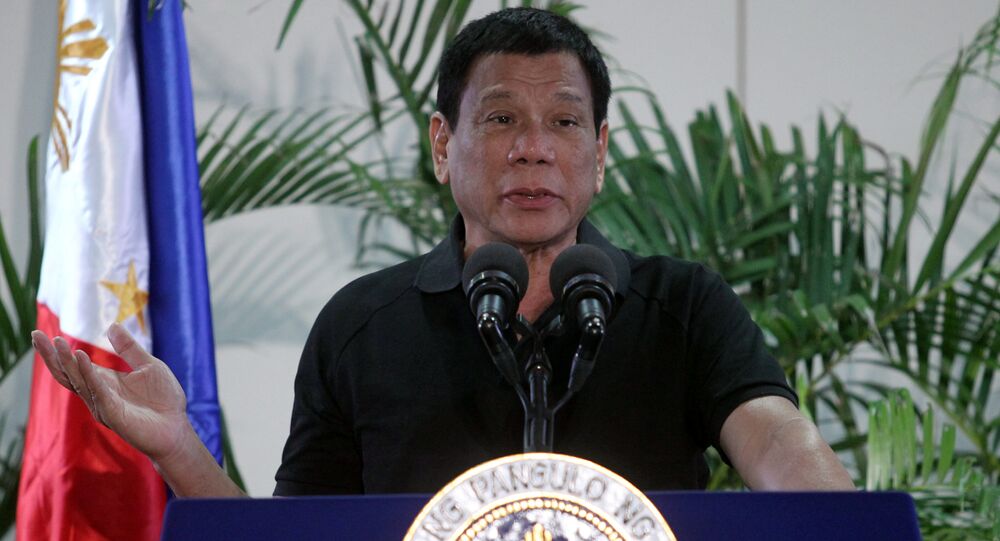 Philippine president Rodrigo Duterte stated that he has nothing against America and considers US President Donald Trump his friend.

© AFP 2021 / TED ALJIBE
'You Must Be Kidding': Duterte Won't Allow US to Treat Philippines as Colony
DAVAO (Sputnik) — Rodrigo Duterte considers US President Donald Trump his friend, however, Manila has shifted its foreign policy from pro-western course, the Philippine president said in an interview with Russian media.

"I have nothing against America. We are perfectly alright. Trump is my friend," Duterte said.

At the same time, the president noted that Manila was diversifying its relations.

"My foreign policy has shifted from pro-western. I now have this working alliance with China and I hope to establish a good working relations with Russia. Why? Because western world, EU and everything, they have this double talks," Duterte added.

© AP Photo / Aaron Favila)
Philippine President Duterte Vows Not to Buy US Arms, Mulls Turning to Russia
Duterte previously made some harsh statements regarding the United States. In October, Duterte stated that it was "time to say goodbye" to the United States’ use of Philippine land for military bases, secured by a deal signed by Duterte’s predecessor. In November, Duterte said that Manila intended to cooperate with Moscow and Beijing rather than with Washington, but did not rule out cooperation with then-US President-elect Donald Trump.

In late April, Trump and Duterte held a phone talk, in which the US president invited his counterpart to visit Washington. Duterte, however, stated later that he could not make any "definite promise" as to whether he would accept the invitation or not.