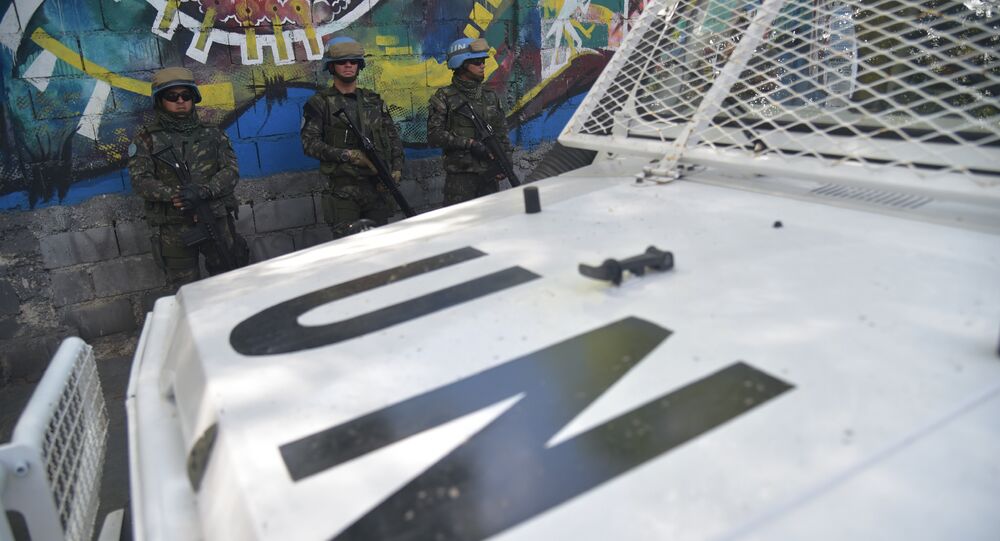 'A Slap in the Face of National Dignity': UN Mission's Dark Deeds in Haiti

© AFP 2021 / Mohamed ABDIWAHAB
UN Mulls Enlisting Women to Pacify the Peacekeepers, Quell Child Abuse by Staff
In an interview with Sputnik Brazil, Haitian political analyst Camille Chalmers commented on the upcoming completion of the UN Stabilization Mission in Haiti (MINUSTAH), which she bitterly described as 13 years of suffering and the violation of fundamental human rights.

Last week, the UN Security Council voted unanimously to wrap up its 13-year-long peacekeeping mission in Haiti by October 15 and replace it with a smaller police-only force.

Led by Brazil, the mission was launched in 2004 when a rebellion led to the ouster and exile of former Haitian President Jean-Bertrand Aristide.

"These were 13 years of pain, suffering and occupation which failed to reach its stated goals… Also, these were 13 years of fundamental human rights abuse in Haiti. The most important thing is that the UN admitted its guilt for the damage done and started the reconstruction process in order to pay its debts to the Haitians," Camille Chalmers said.

"This is why we welcome this [UN's] decision," he added, stressing the necessity of overcoming the negative impact of the UN mission now that a full review of relations with Haiti has begun.

Chalmers slammed MINUSTAN as "a constant interference" in Haiti's recent elections, during which "attempts were made to take control of the election campaign and its results as well as influence the appointment of authorities."

© AP Photo / Gerald Herbert
UN Mission in Haiti: Cholera Outbreak One of Many Crimes
According to him, "the Haitians went through it with great disappointment, anger and irritation," something that he said was reflected in the "very low voter turnout" in the November 2016 elections in Haiti.

Chalmers noted that the elections were held "in a political climate that proved unfavorable for the democratic authorities' reputation."

"This means that we are lagging behind in the processes of institutionalization and building trust between the people and the state," he emphasized.

He said in this regard, that Haitian authorities should "realize all the negative consequences" experienced in 13 years in order to "enter the true process of restoring state sovereignty."

According to Chalmers, "the occupation forces, whatever their origin, harm people; this is a slap in the face of national dignity."

He added that "Latin American units were used [in Haiti] as an instrument within an imperial project controlled by the US and the European Union."

"The Latin American forces were used, because it is cheaper than sending US marines to Haiti. We cannot talk about a peace process in the country because there are no basic elements that could restore a safe climate in Haiti. Pervasive poverty, the polarization of wealth and drug trafficking to the US are still widely spread there," he concluded.

He said that punishment for sex crimes can only be applied to the countries of the so-called Rome Statute, of which Brazil is a member and which created the International Criminal Court.

"In any case, there is a list of crimes that the International Criminal Court is authorized to deal with.  Among them crimes against humanity, which, in particular, include sexual harassment," Carvalho said.

In addition, from 2004 to 2007, 114 Sri Lankan peacekeepers were withdrawn from the US mission in Haiti after they were accused of harassment of minors.

Around 800,000 People in Haiti in Desperate Need of Urgent Food Supplies