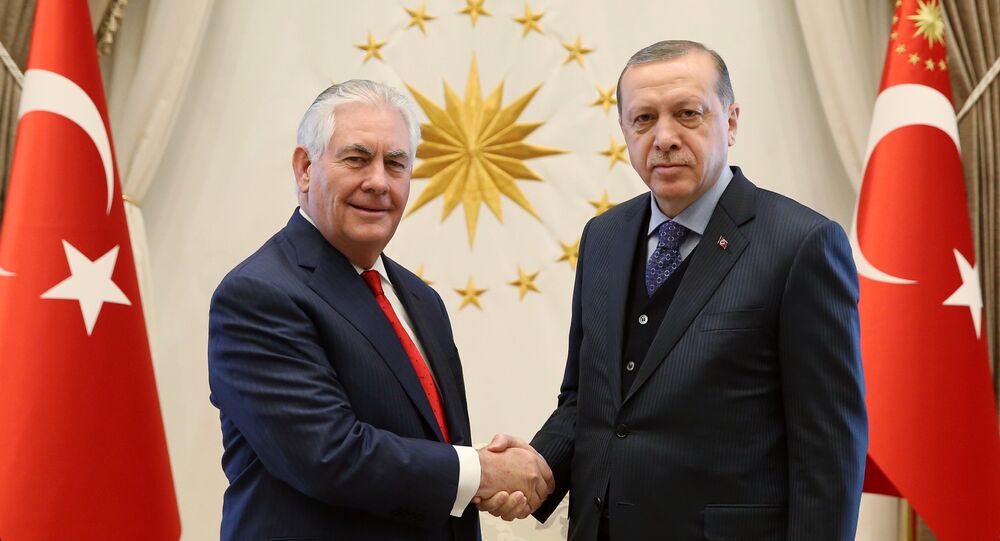 Cold Turkey: US Secretary of State Fails to See Eye to Eye With Erdogan

With high hopes in place ahead of Rex Tillerson's visit to Turkey, the reality proved less optimistic because the US Secretary of State failed to reach a consensus with Turkish President Recep Tayyip Erdogan on all pressing bilateral issues, according to Russian political analyst Gevorg Mirzayan.

© AFP 2021 / ARIS MESSINIS
Between Two Stools: US Won't Abandon Either Syrian Kurds or Turkey
In an opinion piece for RIA Novosti, political analyst Gevorg Mirzayan of the Russian Government's Finance Institute specifically focused on US Secretary of State Rex Tillerson's visit to Turkey late last month, which he said failed to meet US expectations.

During the March 30 visit, Tillerson had to get acquainted with the Turkish leadership and attempt to defuse bilateral tensions which Mirzayan said could end in a severance of US-Turkish relations.

"After all, Turkey, which independently resolves issues of cooperation with Russia and Iran, creates problems for Americans. Especially given that it is still a NATO member and any problems pertaining to Turkey immediately become NATO problems," Mirzayan said.

Although Tillerson was able to meet with Turkey's leader, he was unable to meet his key objective of dispelling key tensions between the countries, Mirzayan added, referring to Tillerson's unwillingness to reach a compromise with Ankara on Gulen's alleged role in Turkey's coup and the Kurdish problem.

Gulen, an Islamic cleric who lives in Pennsylvania, remains one of the most serious opponents of Erdogan and remains a thorn in his side despite his exile.

The cleric allegedly controls a whole network of supporters in Turkey and is working to prevent Erdogan from building the sultanate. Mirzayan recalled that Gulen's extradition could prompt Erdogan to make considerable concessions to Washington.

"However, Tillerson and Erdogan failed to agree on the extradition because actually, President Trump cannot extradite Gulen, who allegedly cooperates with US intelligence. According to some sources, US intelligence often uses Gyulen's network structures to realize their goals," Mirzayan said.

Considering the already-complicated relations between Trump and the CIA, the US President is unlikely to spoil them even further, he added, not ruling out that Gulen could become a lever for the White House to put pressure on the CIA.

Mirzayan recalled that President Erdogan demands that the US stop supporting the Syrian Kurds.

He quoted Turkish Foreign Minister Mevlut Cavusoglu as saying that "the United States recognizes the Kurdish People's Self-Defense Forces and the Democratic Union Party as terrorist organizations but despite this, America continues to help them, and this affects our bilateral relations."

"For Washington, the choice is, in fact, obvious. They are not going to abandon the Kurds, because it is the Kurdish forces who are advancing on Raqqa, Daesh's self-proclaimed capital in Syria. Also, it is the Kurds who do not set any specific conditions for the Americans, who need the Kurds much more than Erdogan," Mirzayan said.

In addition, he added, the Turks themselves say that they will not participate in the liberation of Raqqa, with Erdogan insisting that to fight terrorism, the US should rely on "legitimate" partners.

What's more, Turkey currently urges both the White House an  Tillerson to make a choice between "Turkish allies" and "Kurdish terrorists."

© AFP 2021 / DELIL SOULEIMAN
With Friends Like These: US-Turkey Friendship to Be Put to the Test in Raqqa
Meanwhile, Tillerson has pledged that US President Donald Trump's administration will continue to build ties with its long-standing NATO partner Turkey in the years to come.

"In the US, the people of Turkey have a trusted ally and a partner who is committed to its safety and security and advancing economic opportunity. … The Trump administration will continue to build ties with the long-standing ally and our friend," Tillerson said at a press briefing in Ankara.

Turkey and the United States will stay together as part of the US-led coalition seeking to defeat Daesh, he added.

US Facing ‘Tough Decisions’ Regarding Cooperation With Kurds, Turkey - McCain