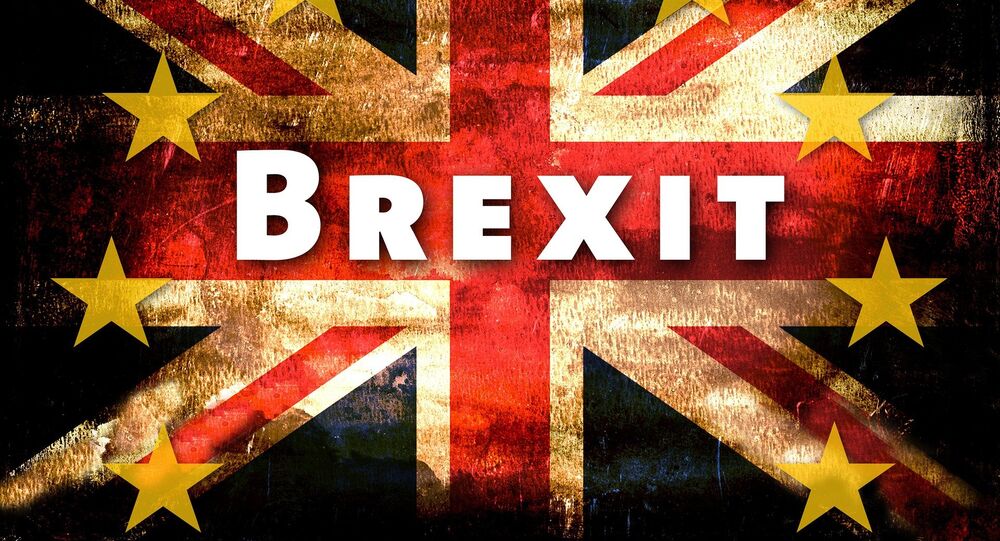 The expiring year will be remembered for giving shape and strength to the global trend of rising anti-globalist and protectionist sentiments in Western democracies throughout the world.

Cathal McNaughton
Whither Globalism: What's Behind the Rebirth of Nationalism in the West?
MOSCOW (Sputnik) — The two brightest examples of the profound backlash against open markets and borders in 2016 were the Brexit referendum in June and the victory of Donald Trump in the US presidential election in November.

Both victories – of the ‘Outers’ in the referendum on the UK membership in the European Union and of the Republican controversial candidate – became possible due to the fatigue of the voters with the effects of globalization and the consequences of the elites’ long-standing policies.

The Leave campaign ahead of the Brexit referendum focused on one simplistic, but effective, argument about the need to close the national borders. It resonated well with the feelings of UK nationals, irritated with the unprecedented inflow of migrants, especially from the Middle East, that Europe saw in 2016, and scared of the increased terrorist threat.

The referendum took place just after Brussels and Ankara agreed on a deal, under which Turkey pledged to take back all undocumented migrants who arrive in the European Union through its territory in exchange for Syrian refugees accommodated in Turkey, on a one-for-one basis. In return, the 28-nation bloc pledged to accelerate the Turkish EU accession bid and introduce a visa-free regime between Turkey and the bloc.

The Leave campaign, which seized on the prospect of Turkey joining the European Union to highlight London's perceived lack of control over immigration policy, teed up a victory. Despite all the polls and projections, 51.9 percent of voters, or some 17.4 million people, supported Brexit.

The choice of Britons inspired Eurosceptic anti-immigrant activists around the continent. Many analysts predict that the UK’s exit will tip the balance between "eurooptimists" and "eurosceptics" and give more power to traditionally protectionism-oriented states within the European Union, such as France and Germany.

Campaign of Donald Trump in the run-up to the presidential election in the United States also was simplistic in its formulas and calls, taking advantage of the people’s tiredness from the economic and political insecurities and suggested a U-turn from the previous administration’s policies. Protectionist and anti-immigration pledges were the pillars of the campaign.

© Sputnik / Alexei Danichev
Eurasian Economic Union Countering Protectionism in Global Trade
Trump criticized many major trade deals, which the United States has already stricken or is currently negotiating with other countries and regions, for disregarding the American interests. He claimed that the United States should exit multilateral formats in order to support its economy and bring jobs back to the country.

Trump pledged to withdraw from the North American Free Trade Agreement (NAFTA) and the Trans-Pacific Partnership (TPP), calling the pact with Canada and Mexico "one of the worst economic deals ever made by our country" and labelling the agreement with the Pacific Rim countries "a disaster" which can destroy US manufacturing and "make America subject to the rulings of foreign governments."

Moreover, Trump called Beijing a "currency manipulator," promising to impose up to 45-percent tariffs on Chinese exports to the United States.

Trump was also known for his harsh anti-immigration stance. In particular, he repeatedly expressed a desire to build a wall along the border to block undocumented immigrants from coming into the United States. He claimed there must be "zero tolerance for criminal aliens" and promised to triple the number of deportation officers and border patrol agents by 5,000, as well as to block funding for sanctuary cities.

These pledges, whether they will ever be implemented or not, served their purpose resonating with the feelings of ordinary Americans and prompting them to choose Donald Trump as the president of their nation, despite most of the polls and projections, just like it was with Brexit referendum.

Rise of protectionism and anti-globalism made global international institutions feel unsettled ground as they made numerous statements and commitments to prevent predominance of protectionism in global trade and sovereigntism in foreign policies.

In September, when the Brexit choice was already a reality, but the US election was still ahead, G20 leaders reiterated their intention to roll back protectionist measures in trade until the end of 2018 in their communique at Hangzhou summit.

"We reiterate our opposition to protectionism on trade and investment in all its forms. We extend our commitments to standstill and rollback of protectionist measures till the end of 2018, reaffirm our determination to deliver on it and support the work of the WTO, UNCTAD and OECD in monitoring protectionism," the communique read.

In late November, just after the US election, leaders of 21 Asia-Pacific APEC countries also stood up against protectionism in their Lima declaration. They extended until the end of 2020 a moratorium on trade-distorting measures, which, they said, "weaken trade and slow down the progress and recovery of the international economy."

The Organization for Economic Cooperation and Development (OECD) decried the increasing trend of protectionism in its late November report. The organization warned that it could deteriorate growth of local and world trade, as well as cause increase in prices and worsening of living standards across the globe.

A year-end economic and social development report by the United Nations in early December warned that a growing threat of protectionism in the developed world threatens to undermine economies in the Asia-Pacific despite the 5 percent growth of 2016.

The global trend of "closing doors" in economy may mean that bilateral trade deals will replace plurilaterals, such as TPP or TTIP, in future. US-Japan and US-UK bilateral economic partnerships now look most feasible.

On the political scene, Europe may see new sovereignty-defenders coming to power during the upcoming election in some of EU member states.

In France, which is going to have fiercely-contested national elections in April-May, Francois Fillon, nominee from the center-right The Republicans party, and far-right candidate Marine Le Pen are the two main candidates. The ruling Socialist Party is lagging far behind after its popularity plunged during President Francois Hollande's term.

© AFP 2019 / PATRICK KOVARIK
Rising Protectionism Could Threaten International Trade Growth – OECD
Fillon does not see eye-to-eye with German Chancellor Angela Merkel who is welcoming migrants to Europe, and for this reason he is against Turkey joining the union. He also supports the lifting of sanctions against Russia, and insists on closer cooperation with Moscow, especially on the Syrian issue. On the EU topic, Fillon, unlike far-right Marine Le Pen, is not a eurosceptic, but his vision is certainly a pro-sovereignty one.

In an interview with Sputnik in November, an adviser on international politics of Italian Lega Nord party Gianluca Savoini said that Fillon’s victory in the Republican primaries reflected the global change toward sovereigntism, which makes the nation's sovereignty its top priority in decision-making.

"After Brexit vote and [Donald] Trump's victory in the United States, Fillon’s win is a proof that the wind is blowing in the direction of sovereigntism on the global scale. The French have just said 'no' to failed policies of left bureaucrats and bankers that are so distant from the people," Gianluca Savoini said.

Le Pen is sending a nationalist, euroskeptical, anti-immigrant message to the voters. She insists it is necessary to cut legal immigration, deport illegal migrants and tighten rules on nationality. She echoes Outers in the Brexit campaign and believes France should take control of its borders and currencies back from the EU institutions. Like Fillon, Le Pen underlines the necessity to cooperate closer with Russia on the international stage.

With the changes in some Western democracies’ administrations yet to come, the year of 2016 might go down in history as a watershed in global affairs which triggered a shift to inward-looking economies and politics.

Protectionism? US May Replace Russian Mi-17s for Afghanistan by Own Black Hawks