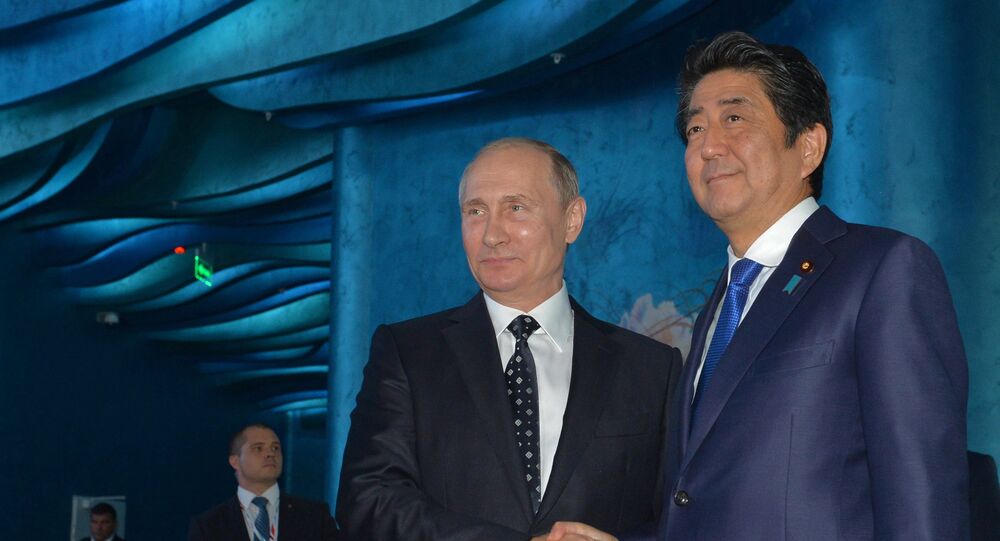 Russian President Vladimir Putin’s visit to Japan on December 15-16 will not resolve the territorial problem between Moscow and Tokyo, but it will improve bilateral relations, said experts of the Institute for Far Eastern Studies.

© Sputnik / Sergey Guneev
Putin: 'Russians Love Japan'
The main issue on the agenda will be Russian-Japanese economic cooperation which does not reflect the potential of both countries, suggested Valeriy Kistanov, director of the Center for Japanese Studies at the Institute for Far Eastern Studies.

According to Kistanov, the numbers show an extremely low level of trade and economic cooperation between Moscow and Tokyo.

Nevertheless, he expressed hope that a package of documents that Moscow and Tokyo are expected to sign during the visit will curb the negative trend in bilateral trade and economic ties.

© AFP 2020 / STR
China, Japan Agree on Maritime Defense Coordination
The trend by Japanese Prime Minister Shinzo Abe aimed at cooperating with Russia has been a headache for the United States. Washington’s sees this approach as a breach of G7 nations’ unanimity toward Moscow.

Moreover, there are many of those in Japan who are skeptical about Abe’s intention to develop economic cooperation with Moscow. Critics fear that Japan’s economic assistance to Russia will not finally result in any territorial gains.

However, experts from the Institute for Far Eastern Studies noted that Abe’s interest to Russia is broader than territorial claims and is indirectly related to China, Tokyo’s strategic rival in the region.

Many in Japan understand the fact that Moscow and Beijing have developed strategic cooperation, but they also see the possible dangers of this cooperation for Japan but also for Russia.

Sergei Luzyanin, director of Institute for Far Eastern Studies, said that the upcoming visit by Vladimir Putin to Japan will contribute to dispel Tokyo’s concerns that Moscow is carrying out an exclusively pro-Chinese policy in the region.

"The visit is aimed to prove that Russia’s foreign policy is flexible and independent. Even if this visit cannot resolve the territorial problem it will improve bilateral relations," Luzyanin said.

© Sputnik / Alexander Liskin
Will 70-Year-Old Kuril Islands Spat Be Resolved During Putin's Japan Visit?
Kistanov underscored that Japan is engaged in many territorial disputed but "only Russia wants to have talks on the issue at the highest level."

The dispute over the South Kuril Islands has remained unresolved since the end of WWII.  Japan and Russia have never signed a permanent peace treaty after World War II due to a disagreement over four islands, which Russia calls the Southern Kurils and Japan the Northern Territories. The disputed islands, located in the Sea of Okhotsk, were claimed by Soviet forces at the end of the war.

Japanese media has repeatedly discussed possible scenarios to resolve the situation, including introducing joint governance over some of the islands or establishing areas under joint jurisdiction.

© Sputnik / Yuriy Somov
60% of Japanese Want to Get at Least Some of the Kuril Islands from Russia
At the same time, in a recent interview with the Nippon TV broadcaster, President Putin said that Russia has no territorial problems with Japan, but if Tokyo believes that the problem does exist, Moscow is ready for a discussion.

According to Kistanov, the visit on December 15-16 will not resolve the problem.

"The fact that Abe wants to end the dispute is normal. And Putin wants the same. However, they have different views of how this could be done. Japan wants a peace treaty to resolve the problem. Russia will not give all the four islets to Japan. But Japan cannot also give them up. So, a compromise should be discussed," he said.

The expert also commented on the scenario that presumes giving two South Kuril Islands to Japan according to the 1956 Joint Declaration.
"In theory, this is possible, but in practice it cannot happen," he said.

However, the expert also suggested that Putin and Abe will discuss the issue.

"The point is what a compromise should look like. Russia and Japan will try to come up with a scenario which would save the reputation of each of the sides. If Putin and Abe worked out a roadmap on the problem it would be a very positive step," he concluded.