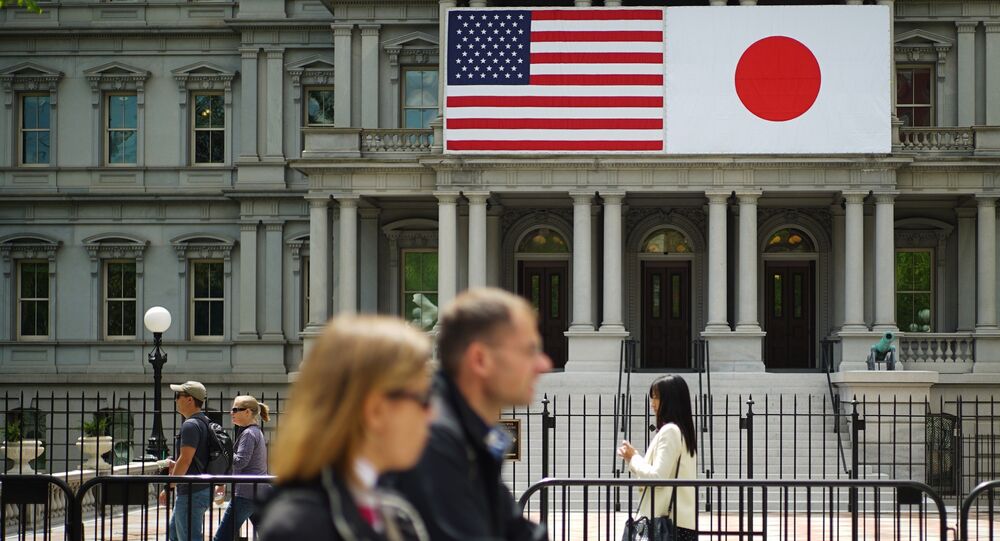 Analysts believe that policy of Japan and the United States towards China might mean that the two countries could be seeking to undermine foreign trade prospects of China’s growing economy.

MOSCOW (Sputnik) — Tokyo and Washington could be searching for new leverage to use against China to undermine its positions in global trade, experts told Sputnik.

They believe that the fact that Japan does not recognize China as a country with a free-market economy, citing government subsidies for the industry sector and protectionism policy on imported goods, coupled with US President-elect Donald Trump criticism of the Asian giant's high import taxes on the US products and its policy in the South China Sea, might mean that the two countries could be seeking to undermine foreign trade prospects of China’s growing economy.

© AP Photo / Charles Dharapak
US-China Trade War is Unlikely as Both Sides Have Much to Lose - APEC Business Council
Japan is following the lead of the Western countries in its anti-China rhetoric, according Viktor Pavlyatenko, senior fellow at the Center for Japanese Studies at the Institute of the Far East of the Russian Academy of Sciences.

"The fact that Japan, just like the European Union and the United States does not recognize the free market status of the Chinese economy shows that these three […] understand that China is a serious rival and […] the joint efforts of the whole Western society are necessary [to counter it]," Pavlyatenko told Sputnik.

The expert explained that if China was not recognized as a country with a free-market economy, it would be more difficult for Beijing to secure loans at the world’s financial market, but easier for the opponents to introduce measures against China within the format of the World Trade Organization.

The United States, the European Union and Japan are acting against the obligations imposed on them as fellow WTO members, when they question China’s economy, Bian Yongzu, an expert with the Financial Policy Research Center at the Renmin University of China, told Sputnik.

"Upon admittance to the WTO China was given a 15-year transition period to switch to a free-market economy. In the end of the current year various sides are formally obligated to recognize this status of China. … This approach [refusing to recognize the status] can be characterized as ‘shameless and insolent’," Yongzu said.

© AFP 2021 / STR
Trade War With China? Washington State in Turmoil After New Tariffs
According to the expert, the reasons for this policy include the weakness of the global economy crippled by a recent crisis, lack of optimism about economy in many Western countries, insufficient competitive advantage over China in a number of spheres.

Yongzu also linked the rise of the anti-Chinese sentiment to the upsurge of the populism in European countries.

However, the attempts to weaken China have not been successful, the expert added.

"As the global advantages in trade and economy reveal themselves in competition, we can see China triumphing over its rivals," Yongzu said.

US President-elect has recently written a series of tweets harshly critical of China, following Beijing’s official representations lodged with the US government after Trump’s conversation with the president of Taiwan, which China sees as its breakaway province.

© Flickr / Gage Skidmore
Trump Criticizes Beijing's Economic Policy, Military Build-Up in South China Sea
In 1979, the US government broke off diplomatic relations with Taiwan and opted to forge ties with China instead.

"Did China ask us if it was OK to devalue their currency (making it hard for our companies to compete), heavily tax our products going into their country (the U.S. doesn't tax them) or to build a massive military complex in the middle of the South China Sea? I don't think so!" Trump wrote.

Konstantin Sivkov, the president of the Academy of Geopolitical Problems based in Moscow, said that Trump had always positioned himself as China’s critic.

According to the expert, if Trump fails to restrain China, the United States will be left behind for good.

"The only solution for this problem is for Trump to join efforts with Russia, separate Russia and China and to try, with the EU and Russia, to reestablish the status quo that existed before China began its leap forward, which we are seeing today," Sivkov said.

© AP Photo / Evan Vucci
Will Trump 'Try to Drive a Wedge Between China and Russia'?
For his Twitter offensive, Trump picked the issues that have been contentious for a while, so the new US administration does not seem likely to reset the relations with Beijing.

In the near future, the US institutions have to give their verdict on two more large-scale deals. One of them is the acquisition of 49.5 percent of Chicago Stock Exchange shares by Chongqing Casin Enterprise Group, the other one is the buyout of the US microchip manufacturer Lattice Semiconductor Corp by China’s Canyon Bridge Capital Partners. The willingness of the US government to accept China’s economic expansion will be tested again by decisions to be made by Obama’s or Trump’s administration.

Will Trump 'Try to Drive a Wedge Between China and Russia'?