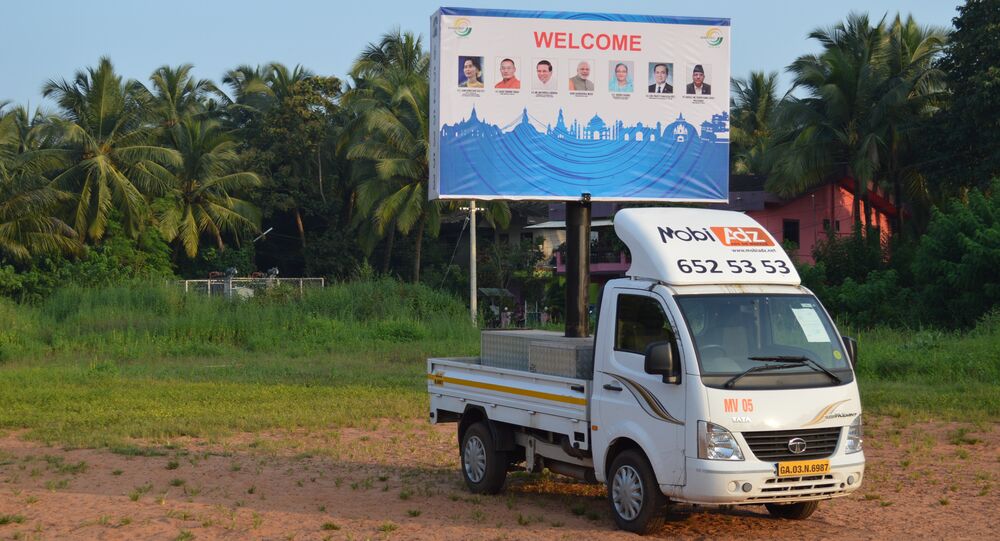 Meeting each other outside of capital cities is nothing new for BRICS leaders. Last year’s summit was held in the Russian city of Ufa; 1,300 kilometers away from Moscow.

© REUTERS / Danish Siddiqui
Intra-BRICS Trade Has Big Potential, Needs Boosting in Local Currencies - Business Council
Denis Bolotsky – India, taking its turn as the host country, followed the tradition and decided to invite the leaders of other four member states of the organization - Russia, China, South Africa and Brazil, to one of its richest rural areas.

Goa is known for its hospitality. It's a popular destination for travelers from all over the world - those who enjoy beach life: swimming, sunbathing and throwing wild parties. But this year, at the end of the monsoon season, the tropical state is hosting a different kind of event. Before the arrival of thousands of tourists, VIP motorcades zip through the narrow roads of Goa, as India is hosting the 2016 BRICS summit.

If you ask the locals - the owner of a tea shop, a bartender, or gas station attendant, they will tell you one thing: they have never seen so many presidents here in the Goan countryside: Vladimir Putin of Russia, Chinese President Xi Jinping, South African leader Jacob Zuma and Brazilian president Michel Temer have arrived to hold multilateral talks and one-on-one meetings.

Formed in the late 2000’s, BRICS has been going through a lot of changes recently, as its members are experiencing all sorts of problems. Growth in the Chinese economy is slowing, Russia was hit by Western sanctions and the low oil prices, Brazil and South Africa are both facing domestic political uncertainty, and even India is going through tough times with the rising tensions at the border with Pakistan. So, it’s likely that member states are now in the process of adjusting their view of the organization and some of them are offering to change the BRICS narrative in accordance with their own vision. India, for instance, introduced a new slogan this year, giving a different vision of the organization’s old acronym: “Building Responsive, Inclusive and Collective Solutions.”

Part of this new agenda, especially anti-terrorism measures, was also discussed by Russian President Vladimir Putin and Indian Prime Minister Narendra Modi. Following bilateral talks both leaders took part in the 17th annual Russia-India Summit, which was held on the sidelines of BRICS.

Modi says he considered his conversation with Putin a meeting of friends, and since friends often don’t need interpreters, Indian Prime Minister actually explained what he meant in Russian:

Russia and India indeed looked like good partners, signing 18 agreements on the sidelines of BRICS. Among them – multi-million dollar arms contracts on supplying India with Russian-made helicopters, warships and state-of-the-art missile defense systems, as well as energy deals - a big step forward in the energy sector. The Kudankulam nuclear power plant – a Russo-Indian joint venture, received a formal blessing from the leaders of both countries who pressed the “magic button” to lay the concrete foundation for the plant’s 3rd and 4th Units.

On Sunday BRICS leaders will take part in an informal program – dinners, concerts and folk costume photo ops. And it seems that with Goa’s rich and exotic culture, the latter, is likely to make it into the headlines just as much as the serious things, like the negotiations and press conferences.