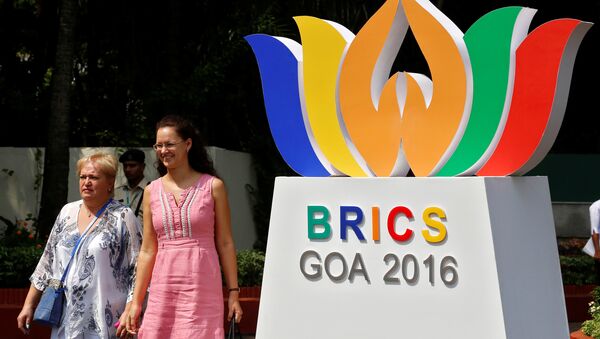 BRICS Business Council Chairman Onkar Kanwar said that there is much room for BRICS future trade development and it needs enhancement in local currencies.

"Trade amongst BRICS was US$168 billion in 2008 and currently stands at US$242 billion (2015). However, intra-BRICS trade is only 5% of the total trade of these countries. Thus, there is an immense scope for increasing trade amongst BRICS countries," Kanwar said.

The BRICS Business Council constantly works to advise the national governments on how to facilitate greater trade flows and investments among member states.

"Amongst our key recommendations for promoting trade, we have called for enhancing the scale of trade in local currencies. We have also requested for long term multiple entry visa regimes for entrepreneurs from BRICS nations. Additionally, to enable removal of trade barriers, we have also suggested setting up of a Trade Facilitation Network amongst BRICS economies," he added.

The need to create a single BRICS free trade area in order to curb protectionism is one of the issues that might be reflected in the final BRICS Goa summit declaration that is taking on October 15-16.

The ability of the BRICS group to face potential economic turmoils depends on the success of structural reforms and trade liberalization in member states, BRICS Business Council Chairman said.

"BRICS countries have demonstrated economic resilience by weathering the global financial crisis rather well and are expected to play a central role in the global economy going forward. However, the future success will depend on fixing macro-imbalances; implementing appropriate structural reforms; and further liberalisation of trade and investment," Kanwar said.

He said the BRICS members should continue work toward strengthening their cooperation in terms of market access and finance to mitigate the impact of any potential economic downturn.

The BRICS Business Council meets on the sidelines of the eighth group's summit in India's Goa in order to come up with the ways to boost trade among Brazil, Russia, India, China and South Africa, and advise national governments.

The long-term growth potential of the BRICS group is not threatened by economic slowdown that some members are now facing, Onkar Kanwar told Sputnik.

"While some of the constituent members may be undergoing a phase of weak economic performance, the long term growth potential of the BRICS grouping remains intact. Today, BRICS economies account for more than one-fifth of global economic activity. With a combined nominal GDP of $16 trillion, which is equivalent to about 22% of the gross world product, these economies are well poised to provide the much needed growth momentum for the world," Kanwar said.

He added that the effectiveness of BRICS lay in a continued rise in internal purchasing demand of the group.

"All the BRICS nations are playing a pivotal role in strengthening and enhancing trade, investment and economic co-operation among the BRICS countries. We represent four continents. Each one of us enjoys comparative advantages and complementary strengths and together we shall build on these synergies and complementarities," Kanwar said.

The BRICS Business Council meets on the sidelines of the eighth BRICS summit in order to come up with the ways to boost intra-BRICS trade and advise national governments.

He added that the BRICS nations had made significant progress as a group since its formation, playing a vital role in the world economy in terms of industrial production, investment capital destination and as potential consumer markets.

"The BRICS countries have been working together on a wide range of issues which are of global importance including strengthening of macro-prudential policies, contributing effectively to enhance trade and investment co-operation, collaborating in areas of agriculture, energy and skill co-operation," Kanwar said.

The group is currently holding a summit in India's Goa, on October 15-16. It is attended by the leaders of all five member countries, who are expected to discuss a plan for cooperation for the near future and a range of political, economic and security issues.