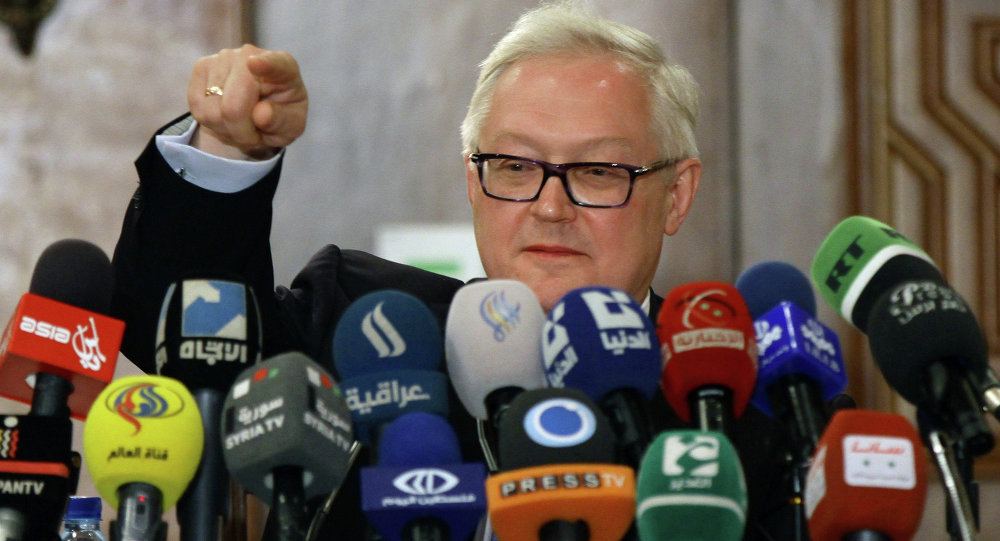 © REUTERS / SANA/Handout
Russia Not Backing Out of Syria Ceasefire Pact With US
MOSCOW (Sputnik) – Ryabkov told reporters that the allegedly errant US airstrike on Syrian government troops and a deadly attack on a humanitarian aid convoy near Aleppo that marred last week's ceasefire agreement dealt a blow to the September 9 accord.

"We believe that the text is sufficiently balanced and presents probably the utmost in the current circumstances of acute crisis, continuing tragedies and most importantly — a situation where significant differences remain between Russia and the United States on a conceptual plan in terms of what and how to act in order to address the problem," he said.

There is no alternative to a Russian-US ceasefire deal in Syria despite significantly lower chances of its success after recent strikes blamed on both countries, Russian Deputy Foreign Minister said.

The September 9 agreement reached by the Russian and US diplomats that went into force last week was subject to extensions and anti-terrorist cooperation if it succeeded. The truce was marred by an allegedly errant US airstrike on Syrian government troops and by a deadly attack on a humanitarian aid convoy near Aleppo.

"The task of destroying terrorist groups not only in Syria remains at the center of our attention. Of course, after these events, the chances of the agreement's implementation have reduced, but there is no alternative to it. We need to intensify the work," Ryabkov told reporters.

The existing plan aimed at reaching settlement of the Syrian crisis is unusable and will become functional only if the United States convinces the Syrian opposition groups it backs that President Bashar Assad is not the only problem, Sergei Ryabkov said.

"A scheme to find a way out of the situation that would satisfy both the United States and the groups patronized by the Americans has been proposed. But I think that the scheme is unusable, at least until not only the United States, but also other parties 'to this process,' and there are a lot of them, including the governments of several influential countries, ensure non-use of force by structures, which are still convinced that the war is the only way to solve the problem, only method of force could be used to oust Assad," Ryabkov said.

US Making Preparations for Possible Military Cooperation With Russia in Syria