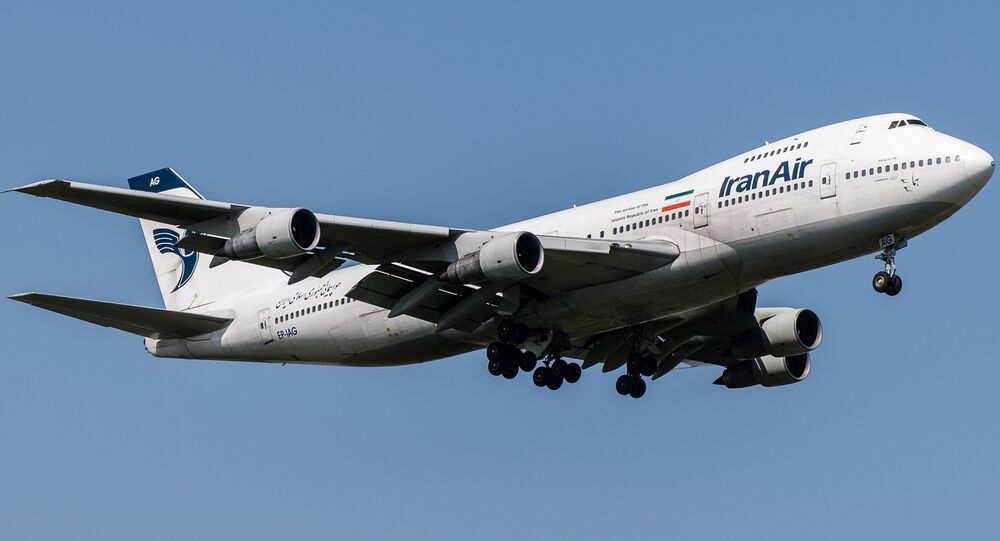 The US House of Representatives has jeopardized the nuclear deal it agreed to with Iran last year by blocking the sale of commercial airliners to the country, political analyst Mojtaba Jalalzadeh told Sputnik.

© Sputnik / Igor Mikhalev
Voice of Reason: Lone Critic of Confrontation With Moscow Becomes 'Outsider' in US Congress
On the one-year anniversary of the nuclear deal with Iran that lifted trade sanctions and appeared to signal a new era in international relations, the US Congress has marked the occasion by blocking the sale of Boeing passenger planes to the Islamic Republic.

Iran's commercial airline companies have suffered from years of sanctions which prevented them from buying new aircraft, or even making repairs to existing aircraft with manufacturer-produced parts.

The sanctions have a negative effect on passenger safety for Iranians, and the average age of aircraft in flagship carrier Iran Air's fleet is 27 years.

Iran Air operates Airbus A320, Boeing 727 and Boeing 747 airliners, as well as those manufactured by the now-defunct Fokker, and McDonnell Douglas, which merged with Boeing in 1997.

In 2010 most of Iran Air's planes were banned from flying to the European Union because of the Europeans' safety concerns.

After the Joint Comprehensive Plan of Action (JCPOA) was signed on July 14 in Vienna by Iran and the 5+1 group of countries (the US, UK, France, China and Russia plus Germany), Iran hoped to take advantage of the lifting of trade sanctions to revamp its fleet and even become a key regional carrier.

"Today’s announcement is the start of the re-establishment of our civil aviation sector into the envy of the region and along with partners like Airbus we’ll ensure the highest world standards," Iran Air Chairman and CEO Mr Farhad Parvaresh stated on January 28.

In June US manufacturer Boeing followed suit, and announced a deal worth up to $25 billion to supply Iran Air with 109 jets, models 737 and 777.

However, the US House of Representatives is trying to scuttle the deal, and last week it passed (by 239 votes to 185) two legislative amendments which ban sales to Iran from Boeing and even Airbus, because it uses some components produced by Boeing.

© Photo : OyanNews/Twitter
Iran Softens Blow of Euro-2016 Defeat for France With Persian Rug Gift
Two of the key representatives behind the campaign to block the sale, Jeb Hensarling and Peter Roskam, made the astonishing claim that supplying passenger planes to Iran is "weaponizing the Iranian regime."

"That (nuclear) agreement is important because it enshrines the rights of all states to conclude trade agreements with Iran. This bill means a ban on the sale of Boeing aircraft to Iran, and therefore it strikes at the heart of the trust and cooperation that helped to conclude the JCPOA," Jalalzadeh said.

Jalalzadeh warns that the legislation, which has yet to be voted on by the US Senate or signed into force by the US President, puts the whole nuclear deal into question.

"If Iran doesn't receive what is stipulated in the contract with Boeing, then that calls the JCPOA into question. It means that there can't be any kind economic cooperation with the US."

"It seems that the Iranophobia that the US continues to spread across the world is turning into economic reality. This, in turn, prevents Iran from getting economic benefits from the JCPOA, because international banks and economic organizations are afraid to invest in Iran. All this, of course, closes the door to the international market for Iran."