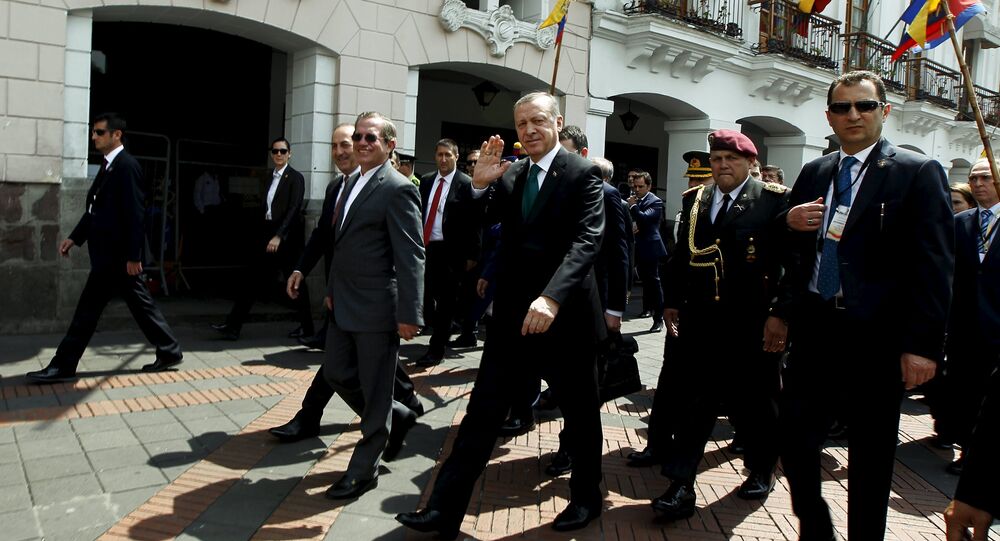 As Turkish President Erdogan continues his five-day tour across South America, Korkut Boratav, a notable economist and foreign relations expert, told Spuntik about the political and economic goals of this voyage.

© AP Photo / Emrah Gurel
Turkish Society in Fear: Erdogan Building ‘Monopoly of Lies'
Boratav argues that by touring Chile, Peru and Ecuador, Erdogan seeks to study the concept of establishing a more powerful presidency, and hopes to eventually implement what he learns at home.

He noted that the probability of any major economic agreements being signed during Erdogan’s voyage is extremely low.

"None of the three countries that Erdogan is going to visit can be considered a key economic player in the region. Yes, Chile is one of the world’s lead suppliers of copper, but the profits from Chilean copper exports are most likely already divided between foreign and local manufacturers. So I don’t think that this trip will bring any significant economic benefits to Turkey," Boratav said.

He explained that by visiting Chile, Peru and Ecuador, Erdogan is most likely pursuing his desire to establish a government with a strong executive in Turkey and seeks to study the experiences of countries where such systems already exist.

"For example, during the 10-year reign of Alberto Fujimori, the presidential government in Peru was transformed into an authoritarian semi-dictatorship. On the other hand, Chile possesses the experience of a presidency based on adherence to democratic traditions," he said.

Boratav also added that another important aspect of maintaining presidential authority in government is the ability to reach a consensus with the parliamentary majority.

"As far as I know, Ecuador’s President Correa controls the parliamentary majority in his country. On the other hand, Peru is the exact opposite, as the president there has lost the support of his parliament. Such experiences also generate considerable interest for the Turkish president," Boratav concluded.

Meanwhile, a group of students from the Institute of National Studies (IAEN) staged a protest rally during Erdogan’s visit to Ecuador. According to the digital newspaper eldiario.es, the protesters were demanding that he stop the ongoing anti-Kurdish military operation in the southeastern regions of Turkey, chanting "Long live the Kurdish people!" and "Away with Erdogan!"