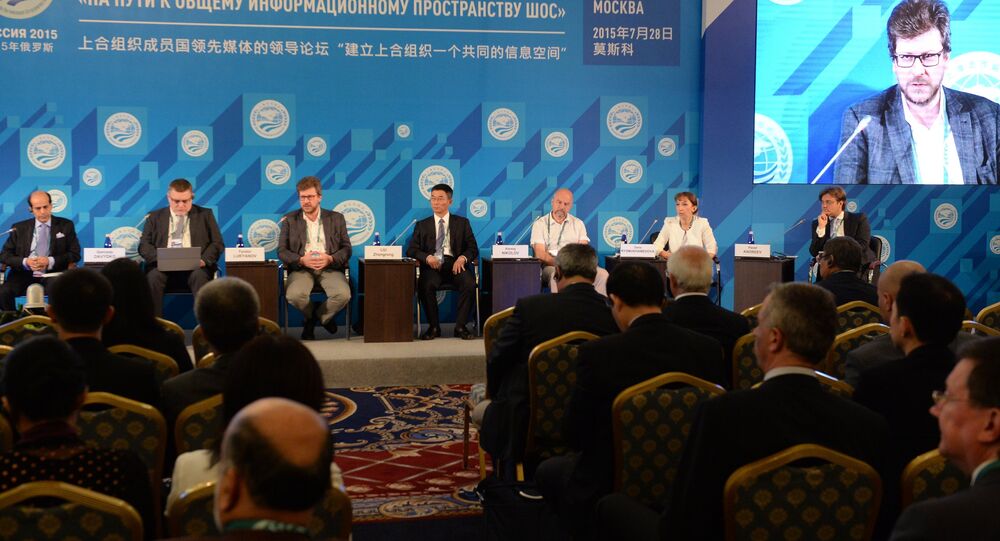 The secretary-general of the of the Shanghai Cooperation Organization said that the SCO welcomes dialogue with Western media outlets to help make coverage of the organization’s activities more objective.

Earlier in the day, Moscow held a forum for the heads of the SCO countries’ leading media outlets to discuss ways to strengthen information cooperation between member-states. Countering Western media propaganda and biased coverage of news related to SCO countries was one of the main topics on the agenda.

"Judging by the review that we have, a number of leading Western media outlets gave limited coverage to the results of the [BRICS/SCO] summit in Ufa," the official said. He did not elaborate on the reasons for the situation.

"There is no need to counter [this situation], we should seek dialogue, a common approach to the situation, may be even a debate. But any cooperation is better than none," Mezentsev told Sputnik.

"Let the journalists of the SCO member states decide on their own what format of cooperation is most appropriate and interesting to them. Partnership in the information sphere should not be governed by the founder states. We should just create conditions for discussion," he added.

© Sputnik / Ekaterina Chesnokova
Rossiya Segodnya Brings Together Leaders of SCO Media Outlets
Promoting cooperation in the sphere of information exchange and news coverage was declared one of the SCO's development objectives at the conclusion of the July summit in Ufa.

The summit was of historic importance for the organization, according to Mezentsev. It gave a new impetus to cooperation between its members and to the role of the organization in the region, he said.

The summit contributed to the "new role of the SCO in solving issues on the international agenda in the long run," Mezentsev said.

On July 9, SCO and EEU leaders met during the BRICS summit also being held in the Russian city of Ufa where they discussed strengthening cooperation in Eurasia.