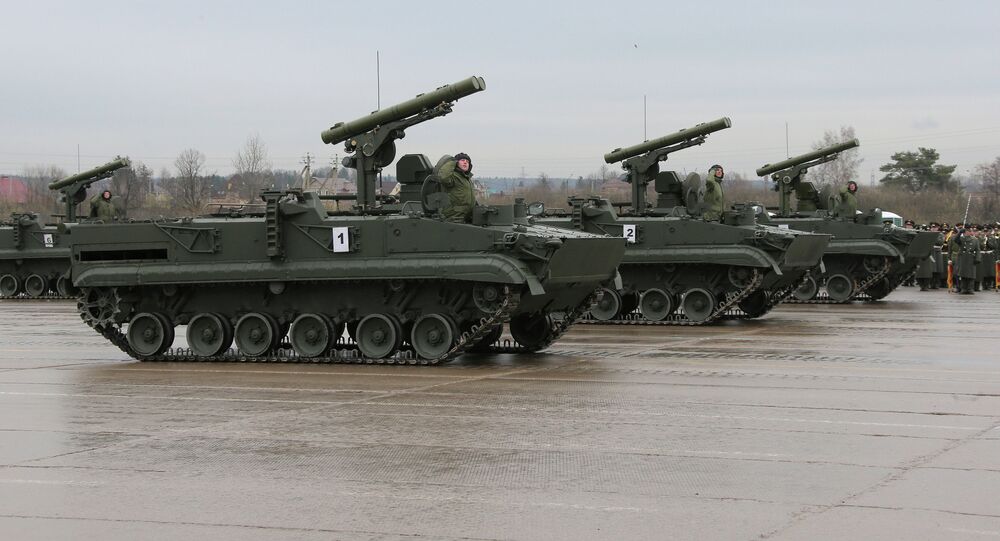 Russia and the United Arab Emirates (UAE) are set to sign a contract on the delivery of Russia’s unique self-propelled antitank system Khrizantema-S; pre-contractual works are currently underway, according to the chief designer of the company which developed the weapons.

“Why has Khrizantema-S attracted the attention of our Emirati colleagues? It’s the world’s only antitank system capable of finding targets without optical visibility and destroying tanks of any type, including advanced models with dynamic armor,” explained Valery Kashin, the Kolomna Instrument Manufacturing Design Bureau's chief designer.  The Bureau, located near Moscow, developed and manufactured the system.

© Photo : Uralvagonzavod Press Service
Russia Signs Arms Deal With UAE to Supply AU-220M Automatic Turret Module
The unique Russian self-propelled antitank system Khrizantema-S was one of the main exhibits at the international defense exhibition IDEX-2015 in February in Abu Dhabi and was then presented to the higher leadership of the UAE during the part of the program which was closed to the public.

“They have expressed an interest in the system and the pre-contractual work is currently underway,” added Kashin.

The Khrizantema-S self-propelled anti-tank system is installed on the tracked chassis of the new BMP-3 infantry fighting vehicle. This solution was enabled by unifying various components and assemblies to reduce the cost of production and subsequent operation of the machine, to improve its maneuverability, mobility, and ability to overcome floating obstacles.

The missile system can easily move at a speed of 45 kilometers per hour over rough terrain. On highways, it has a top speed of 70 kilometers per hour. It has the capacity to travel up to 600 kilometers without refueling. Importantly, the Khrizantema-S can transition incredibly fast from a marching to a combat state.

As soldiers joke, the Khrizantema can “bloom” in twenty seconds.

Today, Khrizantema-S is the world's only anti-tank missile system capable of detecting and destroying targets without optical visibility in smoke, fog, and snow, as well as at any time of the day, thanks to its radar and optical laser channels. The simultaneous operation of two channels allows technicians to track two targets and launch rockets automatically.

© Photo : Wikipedia / Vitaly V. Kuzmin
Frogmen Beware: New Russian Underwater Grenade Launcher Hits IDEX-2015
The Khrizantema-S system is equipped with a unique radar system. The locator creates an invisible radio beam which is accurate to the millimeter. When the beam finds its target and the rocket launches, the strike is inevitable. Radio beam guidance is carried out without operator intervention.

The 15 missiles in the system’s ammunition supply come in two varieties: antitank missiles with shaped-charge warheads or high-explosive antitank missiles. The system can destroy armored vehicles including tanks; engineering structures; low-flying, low-speed air targets; boats and tonnage ships; and enemy forces (in shelters and in the open field) at a distance of up to 6 km.

According to the Instrument Manufacturing Design Bureau's estimates, a battery of three Khrizantema-S military vehicles is equipped to repel 14 attacking tanks, destroying at least 60% of the advancing company. A high-explosive warhead incorporated into the missile system will further expand its application.