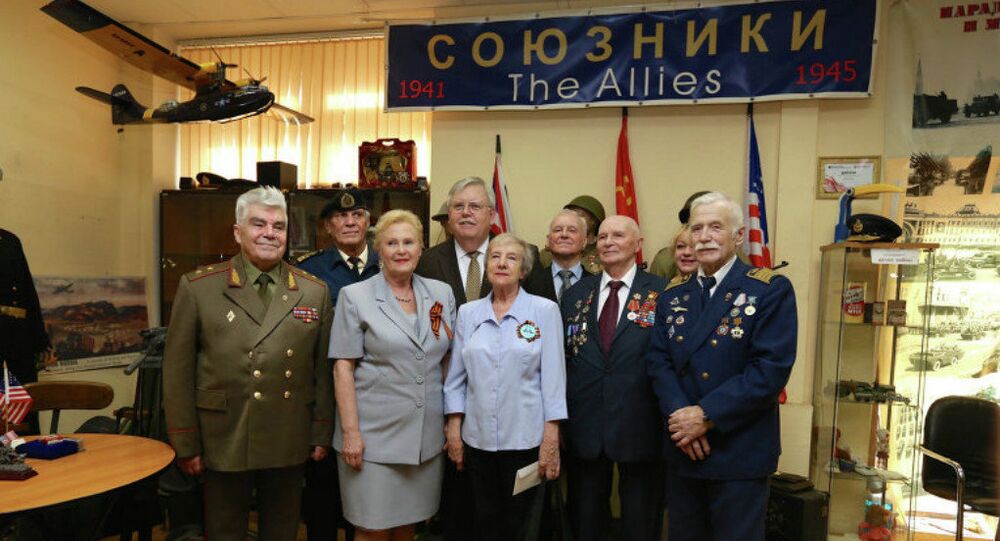 US Ambassador to Russia John Tefft visited the Allies and Lend-Lease Museum in Moscow, where he joined WWII veterans in performing the iconic Soviet wartime song Katyusha.

© Sputnik / Kirill Braga
Business Insider Apologizes for Labeling Russia WWII Memorial 'Absurd'
Thursday saw a visit by US Ambassador to Russia John Tefft to the Allies and Lend-Lease Museum in Moscow, where he and several WWII veterans performed the popular Soviet wartime song Katyusha; Tefft, for his part, promised to learn the text better ahead of his next visit to the museum, Russia's RIA Novosti reported.

Tefft presented the museum with an issue of the newspaper Stars and Stripes, the official newspaper of the United States Armed Forces, which published the Act of Unconditional Surrender of Nazi Germany in 1945.

© Photo : US Embassy in Russia
The US Ambassador to Russia John Tefft meets WWII veterans during visit of the museum "Allies and Lend-lease"

The museum was opened on June 22, 2004 at secondary school 1262, named after noted Russian playwright Alexander Ostrovsky.

Tefft's visit came several days after celebrations dedicated to the 70th anniversary of the historic meeting between Soviet and American troops on the Elba River on April 25, 1945. During the visit, the US Ambassador observed the museum's stands and talked to Russian WWII veterans.

He emphasized the important role of such museums in preserving the memory of World War II and transmitting WWII knowledge about sacrifices and the allies' cooperation to the younger generation.

"The museums support memory and help future generations get a better understanding of how it all happened," Tefft said.

As for the song Katyusha, it was written in 1938 but gained special fame during World War II as an inspiration to defend the Motherland from the enemy. In the song, a girl named Katyusha (a diminutive variation of Ekaterina or Katya, the equivalent of Katie), remembers her dear one, who is a soldier serving on a far away border. Red Army troops paid homage to the song by lending its name to a versatile rocket locker.