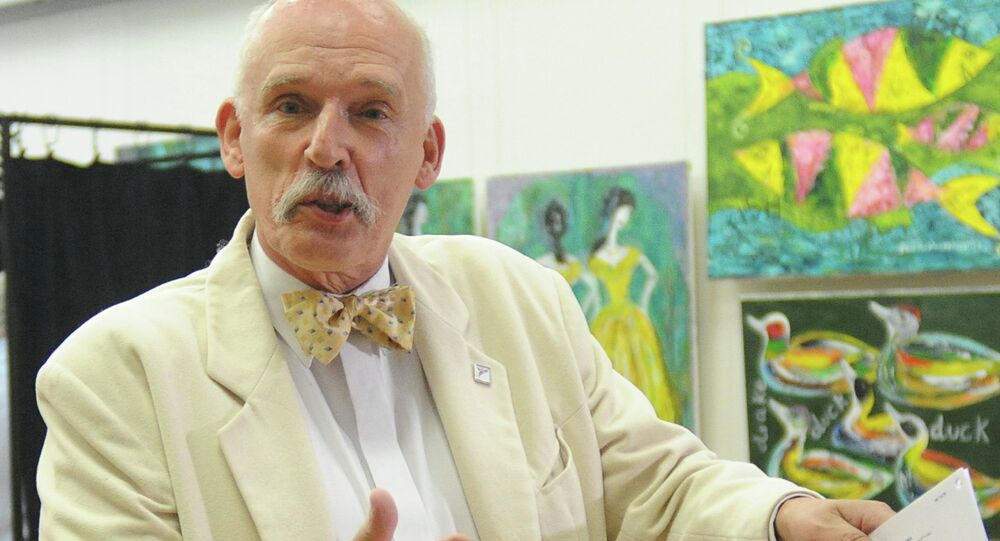 Polish Politician Says He Understands Putin, Accuses US of Warmongering

A Polish politician and MEP has criticized his country’s stance on the Ukrainian conflict and said he understands the position of President Putin, whose country is being surrounded by NATO bases.

© Flickr / CSIS
Polish Ex-Foreign Minister: Russians Not 'Suicidal', Don't Want Open War
A Polish politician and member of the European parliament, Janusz Korwin-Mikke, is convinced his country should stick to neutrality in the Ukrainian conflict.

"We have no single reason to take part in this war," he said in an interview with the Polish news channel TVN 24. “The US has not been attacked. The NATO Treaty is only invoked if coalition members are attacked.”

"We are America’s ally, but only on matters of defense, not offensive," he added.

Korwin-Mikke said that he understands President Putin’s behavior, as Russia is surrounded by NATO bases, while there are no Russian bases around the US. In addition, he said, the US has been evidently moving towards a war in Ukraine for the past six months.

He also gave his reasons why the US wants war at this particular moment.

Fox Business Channel
'Start Killing Russians': Outrageous Outburst by Fox News Military Analyst
"Pro-war circles are very strong in America now, because the US has a huge army, and China will be stronger than the US in several years," he explained. "If America wants a war, it wants it now".

Korwin-Mikke slammed the idea of training Ukrainian soldiers in Poland, which was announced by Defense Minister Tomasz Siemoniak in February. The politician said that his country’s help training Ukrainian military instructors in Ukraine, as a NATO response to Kiev's request for military assistance, was a hostile act against Russia.

Commenting on the relations between Russia and Poland, Korwin-Mikke noted that there is no tension between the two countries and the situation on the border is absolutely calm. However, he added that Russian politicians regard most of his colleagues as “Washington’s poodles”

US PR Firm Abandons Russian Contract Due to Tensions Over Ukraine