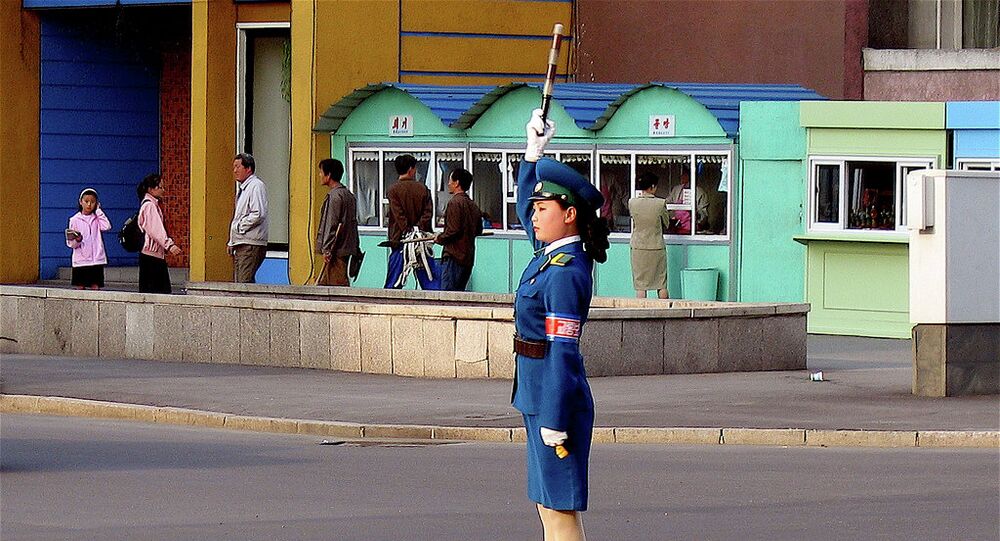 Operation China: Is N Korea a Scapegoat for US to create Asian NATO?

The US, Japan and South Korea are on the verge of concluding a memorandum to share intelligence and classified information about North Korea’s nuclear and missile programs. This comes after the FBI accused Pyongyang of orchestrating the highly publicized hack on Sony Pictures.

With North Korea now in the spotlight of international notoriety due to the Sony Pictures hack, the US is harnessing the momentum to push forward with the controversial intelligence-sharing agreement between its two major Northeast Asian allies. As is typically the case, the US may actually be manufacturing or exaggerating a crisis to pursue its own predetermined ends, since both Western cybersecurity experts and the Chinese government doubt Pyongyang was involved in the hack. Either way, the US is not stopping at its plans to assembling a regional NATO-like organization to counter China, once more using North Korea as the convenient scapegoat to justify its designs. The main infrastructure project envisioned for the future alliance is its own regional Missile Defense Shield, with all of the destabilizing implications for China that the one in Eastern Europe has for Russia.

At this point, it is uncontestable that a security breach occurred at Sony Pictures, but there’s no clear idea of who’s to blame, regardless of what the US government says. Although circumstances point to North Korea, that may not be the case at all. China rebuked any accusations against North Korea, stating that "Before making any conclusions there has to be a full (accounting of) the facts and foundation”. Western cybersecurity experts chimed in, with Sean Sullivan telling Yahoo that “There's no direct, hard evidence that implicates North Korea”, and Jeffrey Carr stating that he “can't imagine a more unlikely scenario.”

Freelance journalist Kim Zetter wrote a lengthy expose on the matter for Wired Magazine, concluding that:

“This is likely a group of various actors who coalesce and disperse, as the Anonymous hackers did, based on their common interests. But even with that said, there is another possibility with regard to the Sony hack: that the studio’s networks weren’t invaded by a single group but by many, some with political interests at heart and others bent on extortion.”

With all of the legitimate questions swirling around North Korea’s alleged involvement, it seems less likely that it played as large of a part (if any) that the US says it did. Instead, it looks like the US government ‘hijacked’ the outrage over the hack and is using its global infamy to create support for its own goals in Northeast Asia.

One of the US’ primary strategic goals during the Pivot to Asia is the creation of a pro-US military alliance directed against China, with North Korea being used as the ‘plausibly justifiable’ excuse. The plans to initiate trilateral intelligence and classified information sharing between the US, Japan, and South Korea must be seen in this light. It doesn’t matter that this is ostensibly aimed at North Korea, since it can easily be redirected against China if the need arises. What’s important at this stage is the creation of the institutional and behind-the-scenes infrastructure and trust needed to carry out the sharing process.

It’s been reported that the memo will not be legally binding, being compared instead to a “gentleman’s agreement”. If that’s the case, then it should raise even more questions about why such a normally covert arrangement would be publicly disclosed. It’s obvious that the US is sending a message not just to North Korea, but also to China, that it’s the one calling the military shots in Northeast Asia.  China may be Japan and South Korea’s largest trading partner (and in stalled talks to initiate a Free Trade Agreement between them), but with US bases in both of the latter, the US is insistent on showing that it’s in charge of their overall policies, hence the pressure on them to integrate their militaries into a de-facto trilateral alliance.

The US has bilateral mutual defense commitments with both of them, but relations amongst South Korea and Japan are frosty at best. Seoul takes deep offense at Japanese leaders’ visits to World War II military shrines, seeing them as an affront to the millions who were killed in continental Asia under Japanese occupation. Likewise, both countries are also engaged in a minor ‘island’ spat over the Liancourt Rocks, the area around which is thought to be rich in natural gas. However, the US is strengthening its deployment in South Korea through the construction of the controversial Jeju Naval Base, which has been opposed by many islanders much as the US base in Okinawa has been historically protested against by those who live there. If the US can patch things up between South Korea and Japan, as well as placate (or completely ignore) the wills of the protesting citizens in each country, then it can make progress on its plans for a Northeast Asian NATO.

One of the prioritized goals of the envisioned alliance is the deployment of a Missile Defense Shield (MDS) in the region. Of course, as with the justification for the trilateral intelligence and classified information sharing memo, the impetus will be placed squarely on countering the ‘North Korean threat’, but in reality, the MDS itself would pose a threat to China. Much as Russia’s nuclear second-strike deterrent could be compromised with the successful completion of the Eastern European MDS, so too could China’s. Not only that, but its asymmetrical military responses to the US Navy’s Pivot to Asia, such as anti-ship ballistic missiles (called ‘carrier-killers’ by some), could be mitigated, thus destroying its ‘Anti-Area’ and ‘Area Denial’ defense strategies. This just means that Beijing will have more of an impetus to develop its hypersonic weapons program in order to counter this threat, which could turn what is currently today’s arm’s rivalry into tomorrow’s arm’s race.