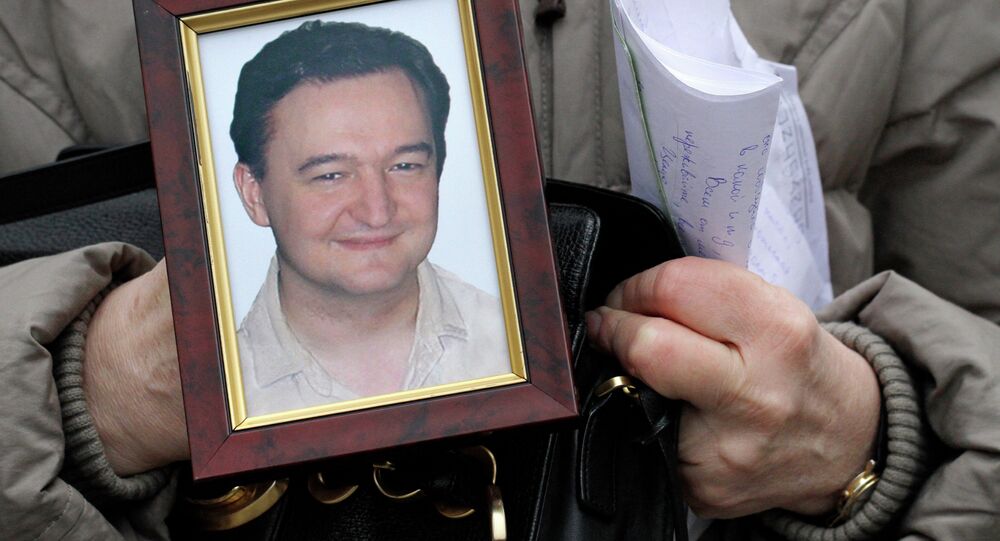 The factbox devoted to two years of the so-called Magnitsky Act passed by US Senate. This act allows Washington to deny visas and freeze assets of Russian officials allegedly involved in the death of Russian lawyer Sergei Magnitsky.

On November 24, 2008, Sergei Magnitsky, a managing partner of Moscow law company Firestone Duncan, a tax and legal consultant of London-based Hermitage Capital Management investment fund was arrested by the tax crime agency of Russia's Interior Ministry in Moscow. Soon afterwards, the ministry’s Investigative Committee (currently – the Investigative Department of the Interior Ministry) charged Magnitsky with abetting the company in tax evasion as part of the Hermitage Capital criminal case.

Sergei Magnitsky was accused of committing crimes under Sections 3 and 5 of Article 33, Part 2 of Article 199 (conspiracy and abatement in serious company tax evasion by a group of individuals) of Russia's penal code.

According to the Investigative Committee, the investigation uncovered that Magnitsky set up an illegal tax evasion scheme by using the Dalnyaya Steppe and Saturn Investments companies incorporated in Kalmykia Republic in southern Russia and managed by Hermitage Capital. The companies allegedly employed disabled people, which entitled them to a 50 percent tax relief. As a result of their actions, over 500 million rubles ($9.5 million) failed to be paid to the Russian budget.

On November 16, 2009, Sergei Magnitsky died in the Matrosskaya Tishina pre-trial detention center in Moscow after nearly a year-long detention.

On March 19, 2013, forensic medical experts concluded that Magnitsky died due to acute heart failure, cerebral and pulmonary edema, with sharp bleeding caused by ventricular fibrillation resulting from complications of two competing diseases that he had: secondary dismetabolic cardiomyopathy on the backdrop of diabetes and active chronic hepatitis.

Investigators closed the criminal case of the death of Hermitage Capital’s lawyer Sergei Magnitsky due to lack of criminal evidence.

On July 11, 2013, Moscow’s Tverskoy Court posthumously convicted Sergei Magnitsky of tax evasion, and closed the case due to his death.

The Magnitsky Case was closely watched by the US and EU authorities.

In October 2010, a bill was submitted to Congress banning entry to the United States and imposing sanctions on a number of Russian officials involved in Magnitsky’s case.

Russian Foreign Ministry stated that a proposal to introduce sanctions “goes beyond elementary decency” and threatens the cooperation of the law enforcement agencies of the two nations.

Notwithstanding Russia’s harsh reaction, the list of individuals to be sanctioned by the United States was expanded in April 2011.

In July 2011, the US State Department introduced visa sanctions against Russian officials allegedly involved in the Magnitsky case.

The Magnitsky List Bill approved by the US Senate was authored by Benjamin Cardin. His bill largely coincides with the legislation approved by the House of Representatives authored by James McGovern. However, the latter applies exclusively to Russia whereas the Senate’s bill can apply to other nations as well.

On July 18, the US Senate united the two proposed bills into one. The House of Representatives put the passing of the bill on hold due to the Republicans’ position and the forthcoming presidential and Congressional elections.

The Congress discussed the issue of cancelling the Cold War-era Jackson and Vanick trade limiting amendment together with an act on introducing visa sanctions against officials implicated in human rights abuses (Magnitsky List Act).

On November 16, the House of Representatives in the US Senate passed the bill on visa sanctions against the Russians and on the simultaneous cancellation of the Jackson-Vanick amendment. The bill was passed by the US Senate on December 6, and signed by President Barack Obama on December 14.

The authority to identify individuals to impose visa and financial sanctions under the so-called Magnitsky Act was passed to the US Secretary of the Treasury and the Secretary of State.

In response to the US actions, Russian President Vladimir Putin signed the Dima Yakovlev Law on December 28, which prohibits foreign adoption of Russian children. The law was named after a 21-month-old Russian boy who died of heatstroke in July 2008 after his American adoptive father left him in the back seat of his car for nine hours. The law came into effect on January 1, 2013.

On April 12, 2013, the US Treasury released a list of 18 Russian law enforcement and court officials who were banned an entry to the United States, and their US assets were frozen. Several more people were included into the closed part of the list, they were only affected by visa sanctions.

In response, Russian Foreign Ministry published the Guantanamo List in response containing 18 names of individuals who, in the opinion of Moscow, were involved in legalizing and using tortures in the Guantanamo special prison, and also implicated in violating the rights and freedoms of Russian citizens abroad.

In May 2014, the United States expanded the Magnitsky List and imposed sanctions on 12 more Russians who Washington believed violated human rights.

© Flickr / Exchanges Photos
US Calls on Russia to Bring Justice in Magnitsky Case: State Department
In July 2014, Russia banned entry to the country for 12 US citizens as a reaction to Washington’s expansion of the Magnitsky list. Individuals whom Moscow believed were involved in “legalizing and using tortures in the Guantanamo special prison” were prohibited from entering Russia. The list also included “US servicemen who abused prisoners in Abu Ghraib prison in Iraq, or those who were covering up committed crimes”.

The Magnitsky case also attracted attention of EU politicians. In October 2012, members of the European Parliament approved a report that contained proposals for imposing sanctions on the Russian officials allegedly involved in Magnitsky’s death. According to the document, the European Council was advised to introduce visa restrictions on Russian officials from the Magnitsky List.

Earlier in December 2010, the European Parliament passed an amendment to the annual report on human rights situation around the world, which contained an appeal to forbid entry to the European Union of individuals “implicated” in lawyer Sergei Magnitsky’s case, as well as to freeze their bank accounts and other property in the EU member countries.

On March 18, 2014, the European Parliament Committee on Foreign Affairs compiled a Magnitsky List of their own, demanding the EU Council to forbid issuing visas and freeze bank accounts of 32 Russian citizens.

In November 2012, the Parliamentary Assembly of the Council of Europe (PACE) was reported to have taken a decision to clarify the circumstances of Sergei Magnitsky’s death. The PACE report was presented by Andreas Gross, a Swiss member of parliament.

On September 4, 2013, a respective PACE commission reviewed the report on the Magnitsky Case prepared by Gross. The European members of parliament approved the draft report. The commission made a decision to discuss the report at the January 2014 PACE Assembly session.

On January 28, 2014, PACE adopted a report on the Magnitsky case. The Assembly decided to give Russia time to react to the document before Strasbourg joined the US sanctions. The Russian delegation in PACE considers the Gross report to be biased and based on false facts.