In a video circulating on social media this week, several English football fans were shown chanting an anti-Semitic song and performing Nazi salutes in a Volgograd pub. The video emerged following a UK police warning to be mindful of Russia's "sensitive sites", including Volgograd.

Another two fans, David Batty, 58, and Michael Burns, 52, also appeared at a special magistrates hearing in Leeds to receive a notice under the Football Spectators Act.

A fourth man, Paul Johnson, 25, who was apprehended on a train from Moscow to Volgograd ahead of England's World Cup opener against Tunisia, was banned for three years due to a court ruling in Oxford.

Earlier this week, a video emerged on social media apparently showing English fans in a Volgograd bar shouting "sieg heil," making Nazi salutes and chanting an anti-Semitic song with references to Hitler and Auschwitz. The footage was reportedly filmed on Monday night after England's first game at the tournament. 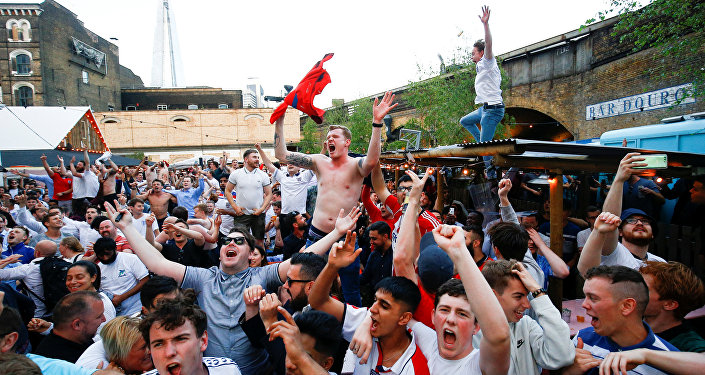 The Football Association (FA) has confirmed that UK police had launched an investigation into the video.

Ahead of the match, English fans were urged not to hang St. George's flags on monuments in Volgograd, formerly known as Stalingrad, and to be respectful of the city, which saw one the bloodiest battles in human history during World War II.

This is far from the first example of inebriated English tourists inciting ire among locals in Eastern Europe with disrespectful behavior. In 2008, then-Latvian interior minister Mareks Seglins railed against his nation's English visitors, calling them "a dirty, hoggish people" following an incident where a young Briton was arrested for urinating on Riga's highly symbolic Freedom Monument.