Tottenham and England star striker 24-year-old Harry Kane, England's youngest ever captain at a World Cup, scored the opener in the 11th minute.

Tunisia midfielder Ferjani Sassi equalized in the 35th minute from the penalty spot. However, Kane scored the late winner in stoppage time to secure England’s victory.

England captain Harry Kane was named the man of the match after his team's 2-1 win over Tunisia in their first game of the 2018 FIFA World Cup on Monday, FIFA said on their official website.

"We played very well, especially at the start. Obviously, a bit nervous, you never know how it's gonna go. We got into the game really quickly, we had a couple of chances, we scored one, probably, could score a couple more… We believed that we will score again," Harry Kane said during a post-match press conference. 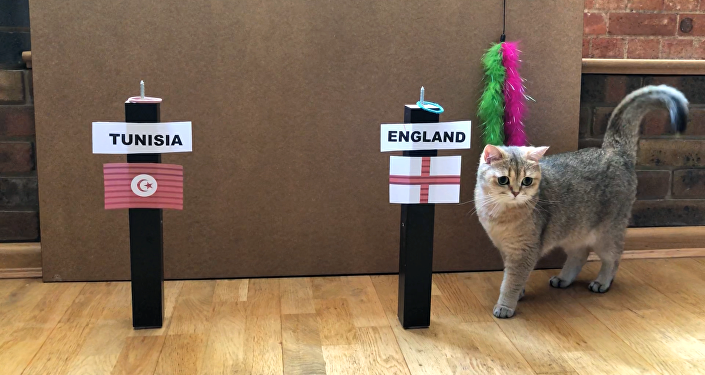 © Sputnik /
England vs Tunisia Match With a Twist: Watch Whiskered Psychic's Prediction (VIDEO)
Meanwhile, Tunisia goalkeeper Mouez Hassen sustained an injury in the beginning of the 2018 FIFA World Cup match against England and was substituted by Farouk Ben Mustapha in the 15th minute.

Tunisia head coach Nabil Maaloul said after the match on Monday that the pitch at the Volgograd Stadium was great, and the World Cup in Russia was one of the best tournaments he attended.

"The pitch at the arena is in great condition, the arena itself is topnotch. Everything is organized perfectly at this World Cup. This is one of the best World Cups that I have personally attended," Maaloul told journalists.

Meanwhile, Nabil Maaloul also said Monday night that a draw in the World Cup group stage game against England would have been “an excellent result” for Tunisia.

"We were playing against a highly-skilled and highly co-ordinated team in terms of their forward players. If we were to get a draw, it would have been an excellent result for us. But hopefully this will lead to higher levels of concentration in the coming games,” Maaloul told journalists.

Maaloul also praised his team’s defense, stressing that Tunisia were able to play “head to head” with England.

"For the first 25 minutes we were playing perfectly, but we sagged in the second half, we lost the rhythm… Now we are set to meet Belgium, they have a fantastic squad, but we will try to score. The support of our [Tunisian] and Russian fans in the stands was just amazing, thank them," Khazri told journalists.

The World Cup group stage game between England and Tunisia on Monday was attended by 41,064 fans, which broke the attendance record of the Volgograd Arena stadium.

The Volgograd Arena’s total capacity is 43,713 seats, with the previous record attendance number having been set on May 9 at the Russian Cup final game between Tosno and Avangard.

Tunisia will next take on Belgium in the Russian capital on Saturday, while England will face Panama in Nizhny Novgorod on Sunday.