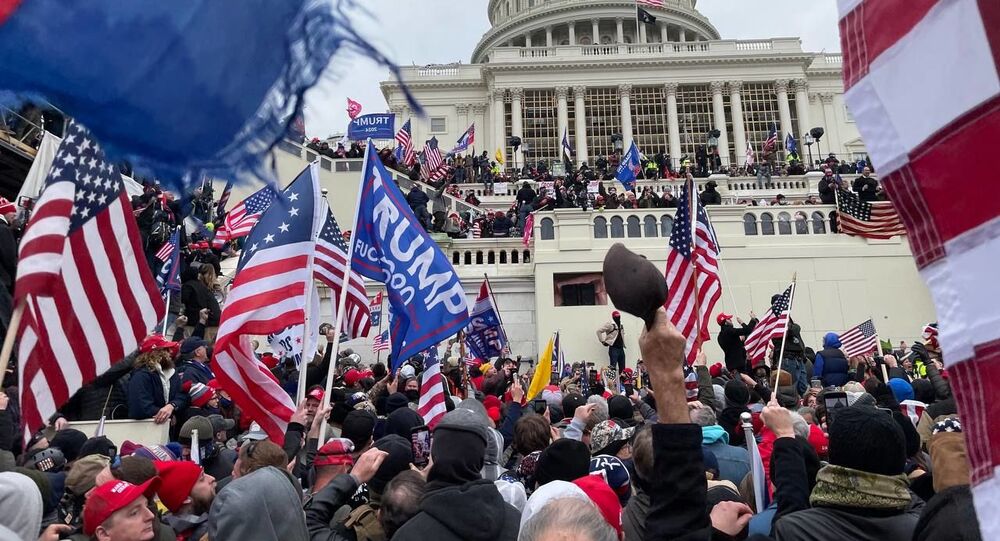 The latest tallies released by the US Department of Justice have indicated that over 500 individuals have been arrested across all 50 states for alleged offenses committed during the violent storming of the US Capitol in early January. Hundreds of individuals who participated in the event have yet to be identified by the authorities.

A Florida man who participated in the deadly Capitol riot was sentenced to eight months in prison on Monday, making him the very first defendant to serve a felony sentence that stemmed from the events that unfolded on January 6.

The Justice Department revealed in a Monday release that the individual at the center of the latest case is Paul Allard Hodgkins, a 38-year-old from Tampa, Florida, who was initially arrested on February 16 after a tipster helped FBI officials identify the Floridian.

Hodgkins previously pleaded guilty to one felony count of obstructing an official proceeding on June 2 after coming to an agreement with prosecutors to throw out lesser charges, which included entering a restricted building and disorderly conduct.

US District Court Judge Randolph Moss acknowledged during sentencing proceedings that while Hodgkins was remorseful about his involvement in the Capitol riot, the Florida man “actively participated in a larger event that threatened the Capitol and democracy itself.”

"Democracy requires the cooperation of the government," Moss said. "When a mob is prepared to attack the Capitol to prevent our elected officials of both parties from performing their constitutional and statutory duty, democracy is in trouble.”

“The damage that Mr. Hodgkins and others caused that day is way beyond a several-hour delay in certification [of the election]. It is damage that will persist in this country for decades," he continued.

While the obstruction charge does carry a maximum sentence of 20 years behind bars, prosecutors argued in favor of an 18-month prison sentence since Hodgkins took responsibility for his actions and pleaded guilty to the felony count.

Ahead of the Monday sentencing, prosecutors argued that while Hodgkins did not engage in violence himself, he did appear prepared for violence on account of him arriving at the scene with rope, protective goggles and latex gloves.

Court documents detailed by the Justice Department noted that footage from the scene places Hodgkins entering the US Capitol at about 2:50 p.m. local time before he opted to walk within the Senate chamber. At one point, Hodgkins even snapped a selfie as chaos consumed the federal building. He did not leave the grounds until about 3:15 p.m.

© AP Photo / US Capitol Police
FILE - In this file image from U.S. Capitol Police video, Paul Allard Hodgkins, 38, of Tampa, Fla., front, stands in the well on the floor of the U.S. Senate on Jan. 6, 2021, at the Capitol in Washington.

In comments to the court, Hodgkins issued an apology for his actions and stated that he was ashamed of himself for being caught up in the riot.

“If I had any idea that the protest ... would escalate [the way] it did ... I would never have ventured farther than the sidewalk of Pennsylvania Avenue,” Hodgkins told Moss from a prepared statement. “This was a foolish decision on my part.”

In addition to the eight months in prison, Hodgkins’s imprisonment will be followed by 24 months of supervised release and a fine of $100.