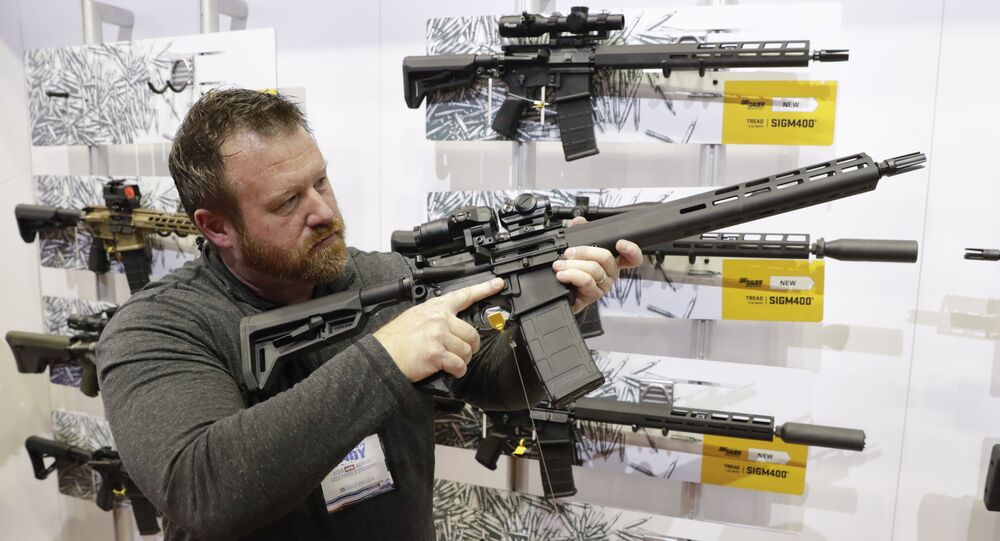 David Chipman, a gun control advocate nominated by US President Joe Biden to lead the Bureau of Alcohol, Tobacco and Firearms (ATF), has faced doubts from several Democratic senators whose votes are needed for his confirmation - particularly due to Chipman's tough stance on guns.

With many moderate Democratic senators still uncertain about whether they will support the candidacy of David Chipman for the head of the ATF, concerns have risen in regard to his gun control initiatives, with some pro-gun activists in the Senate lobbying against his confirmation, according to Wall Street Journal.

Mark Dankof, a member of the National Rifle Association (NRA), a former candidate for the US Senate, and an investigative journalist, shared his concerns with Sputnik, characterizing Chipman as a "far-left advocate for the virtual disarmament of every law-abiding American in the country", referring to what Biden's nominee told the Senate in late May about his definition of an assault weapon, which he urged Congress to ban.

"Upon questioning, Chipman defined an 'assault weapon' as 'any semi-automatic weapon capable of accepting a detachable magazine above the caliber of .22.'", Dankof said. "This would ban every modern sporting rifle in the United States. And in terms of what little would be left to own legally, Chipman would force the gun owner to register his or her weapon with the Federal Government and pay a $200 tax on the gun. None of this nonsense addresses the statistical evidence of who is actually committing crimes with firearms, and why multiple convicted violent felons are getting recycled in American society."

The NRA shares the definition used by the US Army for "assault weapon", referring to "a selective-fire rifle chambered for a cartridge of intermediate power". The NRA considers the term to be "incorrect" when it is applied to "any semi-automatic firearm regardless of its cosmetic similarity to a true assault rifle".

In congressional testimony to Senator Tom Cotton, Chipman said that he supported the ban on assault weapons, asserting that "the ATF defines an assault rifle as 'any semi-automatic rifle capable of accepting a detachable magazine above the caliber of .22', which would include a .223, which is, you know largely the AR-15 round". The AR-15 is one of the most popular weapons in the US.

Dankof argued that Chipman failed to address what is more important when it comes to addressing widespread gun violence in the United States.

"The issue of the failure of America’s mental illness policies and the correlation of psychotropic and SSRI medications to many of the mass shooting episodes is not addressed either", Dankof said.

His comments come as observers point at a possible correlation between mental health issues and gun violence. Particularly, a 2019 survey by Jennifer Skeem and Edward Mulvey found that some 20 percent of mass shootings are committed by a gun owner suffering from a mental health disorder.

Concerns also exist that the connection between the use of legal psychotropic drugs and gun violence has not been well examined, with a 2018 report titled "Psychiatric Drugs: Create Violence & Suicide" suggesting that a correlation should be "fully investigated", and law enforcement officers, school security personnel and teachers trained to recognize "irrational, violent and suicidal behavior" that might be caused by such frequently-prescribed drugs.

Commenting on the possible appointment of Chipman as director of the ATF, Dankof asserted that the former's confirmation "would simply continue to advance the empire’s police state which has advanced with breathtaking speed since September 11th, 2001".

Dankof is not alone in his sentiments, with many Senators from both sides of the political aisle slow to support Chipman's candidacy. Among Democrats, Senators Joe Manchin, Jon Tester, Kyrsten Sinema, and others, remain undecided on whether to back Chipman's confirmation, while Republicans, including Senators Susan Collins and Lisa Murkowski, oppose his nomination, concerned about "demeaning law-abiding gun owners."

The date for Chipman's confirmation hearing has not yet been set.