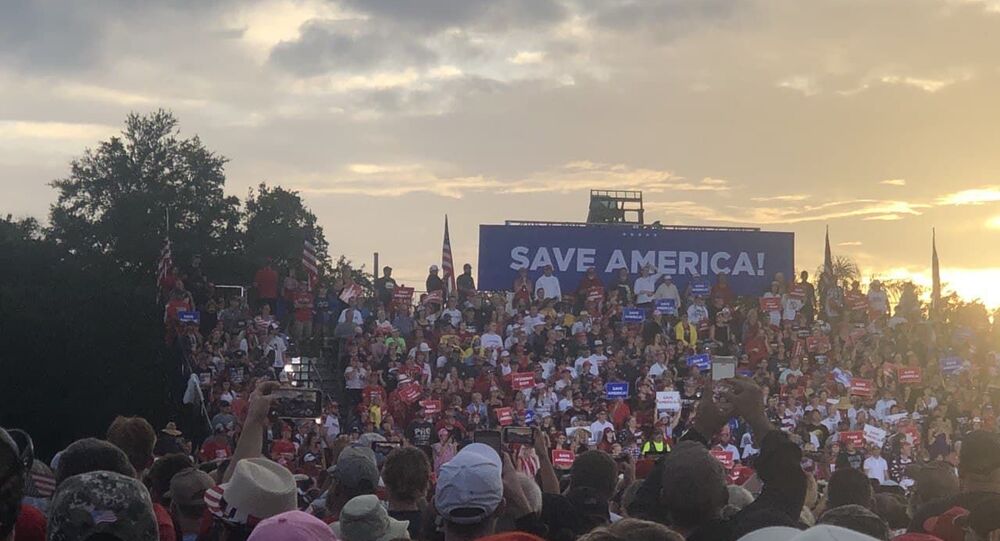 WASHINGTON (Sputnik) - Former US President Donald Trump is holding a second 'Save America' campaign-style rally in Sarasota, Florida, on Saturday.

The rally, cosponsored by the Republican Party of Florida, is an all-day event to support Trump’s Make America Great (MAGA) agenda and celebrate the achievements of his administration. The event, held at the Sarasota Fairgrounds, will include a fireworks show ahead of this year's US Independence Day, Sunday, July 4.

The crowd in Sarasota is diverse and includes people of all ages and nationalities, a Sputnik correspondent reports. There are a lot of Latin American supporters, some people even brought dogs. Most are wearing hats and T-shirts saying Trump 2020 and Make America Great Again. Many have brought flags and banners.

People started gathering hours before the event. Some turned up before noon on Saturday. Just a couple of hours before the rally started, heavy rain began but scared no one away. People kept coming.

Sarasota resident Philippe Cruz said he came to the meeting because he supports Trump and his immigration policies.

"My father is a border patrol agent. He has lost many of his co-workers in the fight against the opioid epidemic on our borders. And I fully just support Trump’s policies on trying to stop those illegal immigrants from coming in and destroying our country with drugs, and illegal weapons," Cruz declared.

The supporter stressed that he fully believes that Trump should run for the US presidency in 2024.

"If this [US President Joe] Biden administration keeps on going on, I feel like it’s going to keep on destroying this country. I feel like Trump should run again," Cruz stated, adding that "today, I feel very patriotic, very happy."

Joe, who declined to give his last name, lives just a few blocks away from the event grounds, and said that he came to the rally because he supports the idea of Trump running for president in the next election.

"That’s why I came here today. It’s a big event. I’ve been to Trump’s rallies in the past," Joe said, adding that "it was important to demonstrate that we weren’t fooled at all by that phony election that took place in November. President [Trump] needs our support."

Another Sarasota resident, Daniel Rudoph, brought with him a hand-made Trump doll that he claimed he had been bringing to events during the 2020 failed GOP election bid.

"I am glad I came here today. People have been taking pictures with Trump and they love it," he said, adding, "I made it," indicating his doll.

Rudoph said that he doesn’t trust the outcome of the 2020 vote and believes that Trump has a chance to win the 2024 elections.

"He is a fighter, he has always been a fighter," he stated, adding that he supports Trump because "he is trying to bring back jobs, and real jobs. He is trying to create more industry."

During a previous Save America rally, held in Ohio at the end of June, Trump described Biden administration's to date as a "catastrophe" and blamed the White House for a crime wave in major US cities, a migrant crisis at the southern US border, and a dismal economic situation marred with high inflation.