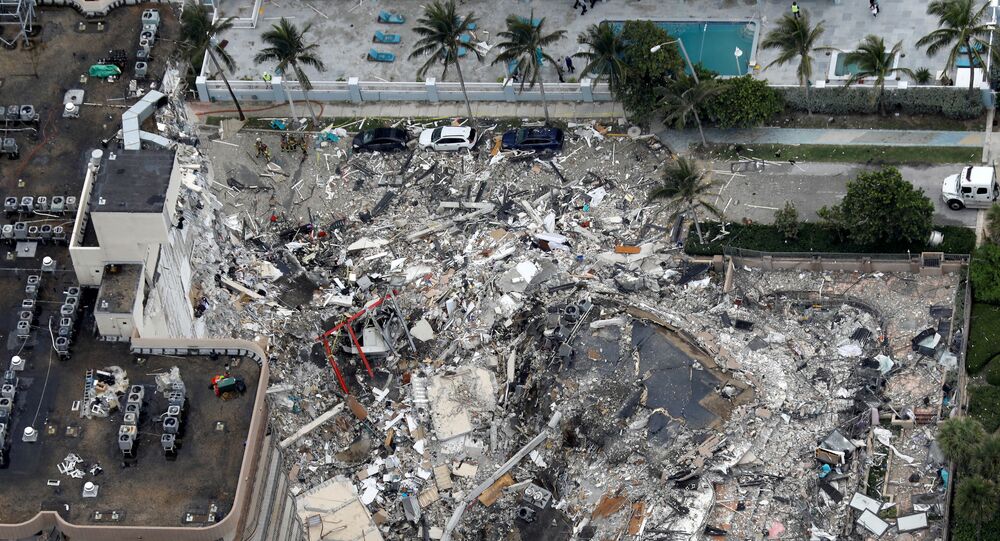 US President Joe Biden is visiting Surfside in Florida, a week after Champlain Towers South, a 12-storey condominium building collapsed, killing more than 150 people. But why did the building fail and how common are such faults?

The official death toll from last week’s Surfside disaster stands at 18 but 140 people remain missing and are believed to be buried beneath a huge pile of rubble.

On Wednesday, 30 June, Miami-Dade police identified Anaely Rodriguez, 42, and her
children Lucia Guara, 10, and four-year-old Emma Guara. The body of their father, Marcus Guara, 52, was identified at the weekend.

The most gut wrenching story I’ve helped write this week.

The entire Guara/Rodríguez family — Lucia, 10, Emma, 4, mom Anaely and dad Marcus — have been identified among the 18 dead.

Here is some of their story, though there is so much left tell: ⁰https://t.co/cWAQNyONJb

​The collapse of the building seems to be linked to an engineering report in 2018 which found the concrete foundations at the foot of the building had suffered “major structural damage” and needed extensive repairs.

The report also listed “abundant cracking” of concrete columns, beams and walls in the parking garage.

Water from the swimming pool, and possibly from the sea, had been leaking into the concrete foundations of the building, weakening it.

Overnight at the Surfside condo collapse, multiple police officers said new concerns about the remaining structure toppling halted efforts on pile & evacuation of area around site. Now they seem to have lowered both cranes that had been working the site until early Thur pic.twitter.com/KwTE9pEbam

​In April this year the president of the building’s board wrote to residents to say the problems reported in 2018 had “gotten significantly worse'' and the bill for repairing it was estimated at US$15.5 million.

Why the building had not been declared unsafe and the residents not been evacuated remains unclear and may only be explained during the litigation hearings which will inevitably take place in the next few years.

Champlain Towers South, at 8777 Collins Avenue, was completed in 1981 and was one of the first buildings to have been constructed since a moratorium, imposed by Miami-Dade County as a result of water and sewerage infrastructure issues, was lifted.

7 days since the Surfside condo collapse. Two precious children pulled from the rubble yesterday, 145 still missing💔
I’m realistic, but I STILL want 2 hold out 4 a miracle.
And tho it may be a cliche to some, it’s not 4 me: my thoughts & Prayers are with all those affected💔😣🥺 pic.twitter.com/xw7Dbr1LU0

​Some reports suggest the building was constructed in an area of reclaimed wetland and it had been slowly sinking since the 1990s.

Of the building’s 136 apartments, 55 collapsed at around 1.30am on 24 June and CCTV footage suggests the middle section failed first and then the outer edge, although the entire collapse took less than 12 seconds.

The residents of the remaining apartments have now moved out while they are assessed by structural engineers.

When President Biden visits Surfside he will not concern himself with the details of the collapse but there is no doubt the cause will be ascertained during litigation and the blame game has already begun.

Before and after images reveal the extent of devastation in Surfside FL. https://t.co/N0NOoMwB0r pic.twitter.com/Msq8tg8hdW

​So what could have gone wrong?

One factor which will need to be examined is the quality of the “pour.”

When concrete buildings are constructed a metal frame will be erected first and then liquid concrete is poured in, drying into a rock-hard material.

Concerned resident at 18-story @MiamiBeachNews waterfront condominium built in 1971 took this video of a section of the underground parking lot directly beneath the pool. She says, "I'm honestly scared of going home. This is frighteningly similar [to Champlain Towers South].” pic.twitter.com/pC1G5ouuLT

​But if the materials are incorrectly mixed or the temperature is wrong it can mean the final product is weaker than it needs to be.

If water then seeps in through the cracks the whole edifice becomes vulnerable.

If the ambient temperature is too hot it can lead to cracks due to shrinkage.

That is why in places like Dubai, Riyadh and many other extremely hot locations concrete is poured at night, when temperatures are lower.

Whether that was the case with Champlain Towers South is unclear.

Ordinary concrete mixtures come in 14 different strength grades - from C15 to C80 - but high-rise buildings require ultra-high strength concrete, usually between C80 and C120 depending on the number of storeys.

Eyewitness reports are backing up my Husband’s take on the collapse in #Surfside.

Red circle was a large pile cap that was later deleted from plans & reduced in size.

Then they added a penthouse.

Then they added 6” of material to the entire pool deck area (black lines). pic.twitter.com/F9VWJCk3Ec

​Building control inspectors are expected to check the correct grade of concrete is being used.

There has already been speculation on social media that the architect’s design was at fault, namely because a large pile cap - one of the concrete columns in the foundations - was deleted from the plan and a penthouse level was added, which would have added to the weight of the building.

But it is not clear whether these plans, apparently submitted in 1979, are accurate.